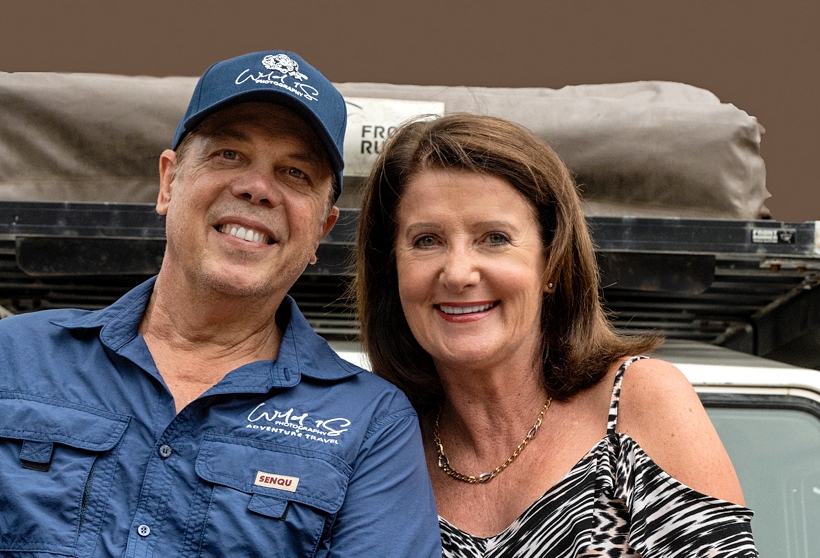 “An addiction in action” is how award winning wildlife photographers Marc and Stella de Chalain describe the passion that gets them out of bed and heading into the bush with cameras in tow long before the sun has so much as peeped over the horizon.
But it is only when one is enjoying a glass of fine red wine from Marc’s home cellar next to a braai fire in the evening surrounded by the sounds of the bush that you can truly appreciate that the couple’s infatuation with capturing what they describe as special glimpses into the private lives of Africa’s magnificent wild creatures runs as deep as their zeal for conservation.
The pair, who married 37 years ago, spent their early years together building careers in accounting and education as well as raising their now grown daughters Ashleigh and Kayla. They’re also accomplished ballroom dancers, having taken to the floor as far away as the revered Empress Ballroom in Blackpool, England.
As with almost everything, nothing is done by halves and their enthusiasm is infectious.
It comes as no surprise, then, that a visit to the Kruger National Park in 2007 with a basic digital camera sparked a passion for photography.
Stella had been visiting this world renowned wildlife haven since childhood but, for Marc, it was a completely new experience that sparked an ongoing fascination. They were back just a year later with far more sophisticated equipment.

Photography into the future

The rest is history and the couple has been shooting not only in their beloved Kruger, but also in the Okavango Delta, Serengeti, Kalagadi, Mashatu in the Tuli block of southern Botswana, Sabi Sands, Zimanga, Chobe, Pilansberg, Addo Elephant Park and other minor reserves ever since.
Marc took what had become a fascinating hobby to new heights in 2013 when he spent four days with well-known wildlife photographer, Grant Atkinson.
“He changed my thinking,” he smiles before relaying how Atkinson not only helped build his confidence behind the lens but also provided strong foundations on which he continues to build to this day.
He has attended photographic and editing courses and shadowed professional photographers but, most of all, he has read, explored and experimented until he has amassed an awe inspiring technical knowledge that he is always ready to share with a massive network of fellow enthusiasts around the world.
“Freely develop your own style. Experiment, learn what you like and learn to shoot to get it. I like blurred backgrounds, fairly high contrast, ‘moody’ pictures of expressive subjects in fairly subtle, warmer lighting conditions as well as high tonal ranges which lend themselves to ‘mono magic’. I also love action, interaction and natural framing when possible,” he points out.

Stella, on the other hand, has a knack for intimately connecting with her subjects, for showing the vulnerable beauty of a leopard or cheetah cub, looking deep into the eyes of a lion and capturing the world through the almost comical eyes of a warthog or a mongoose.
When cooped up in the city, the pair often head out during the wee hours to capture a beautiful sunrise over the East Coast of KwaZulu-Natal or a tiny frog or dragonfly in a little known wetland in the middle of a residential area. Nothing is too big or too small to be fascinating.
Until 2016, Stella tagged along, enjoying the wildlife experience and her husband’s enthusiasm. She was usually the one behind the wheel maneuvering a vehicle into impossible positions so that Marc had just the right angle and light – before returning back to camp at night to serve up a gourmet meal on the wildside.

“But you can only do that for so long. I eventually found myself saying that if I couldn’t beat him I should join him! Now I have got as many cameras as he has and I love it as much. It’s a bug that bites!” she laughs.

The pair share an irrepressible sense of humour and their bush banter is legendary. They are quick to emphasise how each respects the other as an artist in his or her own right and even quicker to relay the many funny stories behind their adventures.

In 2018, the de Chalains decided to take their love for photography to a whole new level, creating a photographic safari venture that they named Wild1’s after the registration number of the vehicle in which they headed out to capture exciting sightings.

“We will always be free to create our own identities as photographers. Wild1’s marks our collaboration and brings us together in the art of photography,” explains Marc.

It also helps the couple do what they do best – share their expertise and love of nature and photography whilst correcting the many frustrations they have experienced as photographers on the backs of safari vehicles steered by drivers keen to show off the big five without truly understanding the needs of those trying to photograph them.

“We have been on numerous photographic and non-photographic safaris over a number of years as guests and so have got a great feel for them. A normal safari is often one where the guests are together in a group size which does not really meet the needs of the photographer. It’s just too large. It’s not uncommon for a standard game viewer or OSV vehicle to have nine passengers seated three per row, which will just not work well for photographers,” explains Marc.

He continues: “Photographers’ requirements differ from those of the general safari guest. The general guests tend to struggle with early rising, cold, wind and later on, the sun, on morning drives and cold and wind later on evening drives. Photographers understand the need to be up early and late to get those breath-taking images. General guests can sometimes be happy to just “view and move” while the photographer tends to know that it is better to wait out a scene and watch it develop in terms of light and, often, an animal’s behaviour. This calls for patience.”

Stella adds that the idea is to share the many places they have explored and grown to love with like-minded people. They can bring guests to lodges where they have befriended owners, managers and game rangers and share their knowledge with both amateur and accomplished photographers who fully understand their mission to capture amazing glimpses of the wild.

At each destination, the couple works with a guide and adjusts each experience to suit the level of expertise of their guests. They provide advice and guide their guests on getting the right shot. In-the-field training is interspersed with talks and workshops on the often incredibly complex technical and theoretical side of wildlife photography.

Although guests pay their ways, the de Chalains are not out to simply make a profit but rather to make photographic friends by offering a quality experience to both local and international guests wishing to explore the Africa that they love.

They’re also keen to share their own photographs and to educate people about one of their pet hates – the tendency to “steal” an image without so much as acknowledging the photographic artist who created it and thereby infringing copyright.

“Not only do we want to sell images and prints that are framed or on canvas but we want to produce coffee table books,” she says.

The de Chalains have also shared images with artists who have used them as the basis for beautiful paintings which have been sold around the world.

They are currently in the throes of completing the 2021 wildlife calendar for the Centre for Rehabilitation of Wildlife (CROW). They have donated images for this conservation cause which is very close to their hearts for a number of years. They also have their images gracing the pages of a 2021 calendar produced in Switzerland and sold there as well as in Germany for the benefit of a Kenyan orphanage.

Although the Covid-19 lockdown has put a damper on many of their travelling plans, they are now also planning a number of personal trips and photo safari’s as restrictions are lifted. In addition to returning to destinations that they love, they are also constantly on the hunt for new places to visit, making it well worth following their antics online.

In Stella’s own words, if you can’t beat them, join them!