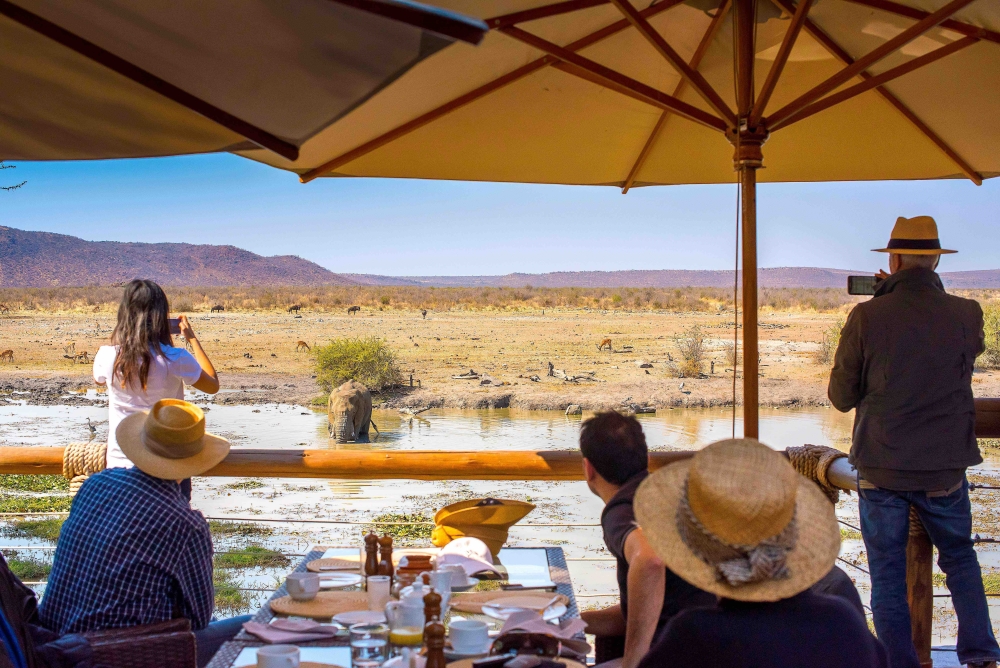 TOURISM DROUGHT IS OVER AT TAU LODGE

The Tau Lodge in the magnificent Madikwe Reserve has opened its safari doors once again to welcome guests and is looking forward to helping visitors to disentangle their minds from the worries of the Covid-19 lockdown!

Tau General Manager in Johannesburg, Renate Oostmeijer, says that guests who have already made it back into the bush have quickly felt rejuvenated.

“Our first guests post-Covid-19 seemed overwhelmed on arrival after the extensive lockdown period. People don’t realise how insular our situation had become, running businesses and working from home. Some people thrive on such isolation but many struggled.

“However, it was evident their stresses seemed forgotten within minutes of departing on their first game drive. Our rangers reported superb game sightings which had the guests transported into the here and now with the scent of the bush and the wildlife experience evidently erasing the corporate worries of the past months.

“At dinner, the atmosphere was filled with hope and more clarity going forward. This is what we were hoping for, to have our guests leave the stress of city life behind.”

A normal five-star safari day at Tau Game Lodge starts with an early wakeup call, if you’d agreed to this with your ranger over a convivial dinner the previous night. You don your most comfortable clothes and layer up as early mornings are cool.

Wash face, brush teeth and meet at the hospitality area of the lodge for a hot coffee of your choice – a smooth latte, cappuccino or even a steaming mug of hot chocolate. You can indulge in a kitchen-baked fresh muffin or a buttermilk rusk which, as is customary in South Africa, you dunk in your hot beverage. 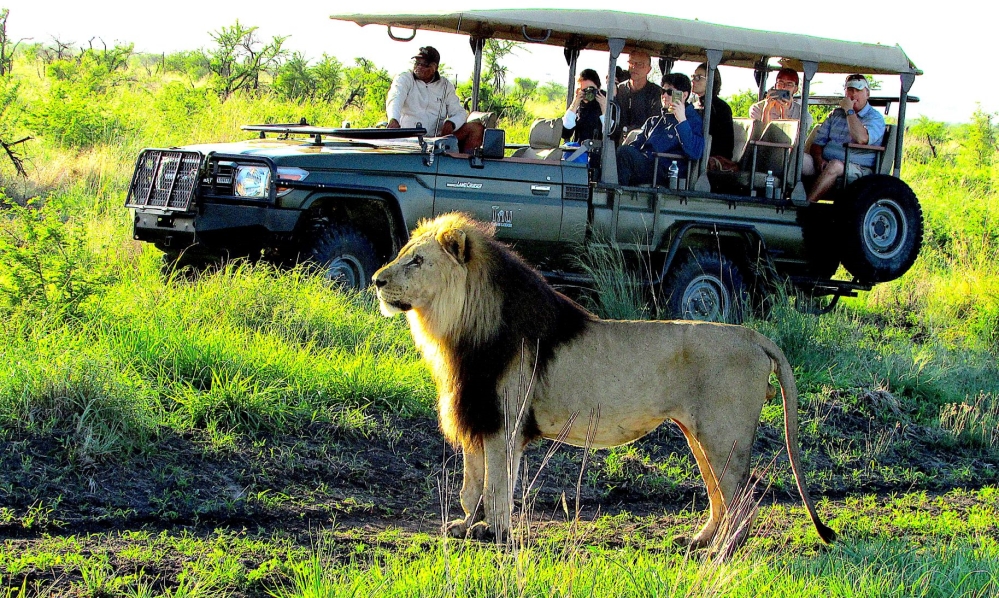 You then get rugged up with a warm woollen blanket on the safari vehicle with canopies for comfort. A maximum of six guests enables the lodge to adhere to social distancing rules and you are off to see game of all sizes and descriptions.

Fast-forward from a spectacular game drive to indulging in a breakfast fit for royals, served at your private table overlooking the verdant waterhole, where you see the natural pecking order of the wild, from a crocodile lazing on the embankment, hoping to trap a snack, the birds avoiding said crocodile, elephants trumpeting their arrival and probably even a hyena and a lion giving each other the evil eye.

For those who are still to visit Tau, the privately owned lodge is situated in South Africa’s fifth largest reserve, Madikwe which is on the far northern border of South Africa and Botswana in a fascinating region known as the Groot Marico.

It is named after the Madikwe or Marico River which forms the basin within which the game reserve is located and was re-created out of 75,000 hectares of farmland which had been extensively degraded by overgrazing as part of a unique partnership between the local communities, private safari lodge owners and the government. Today, the reserve is operated under the auspices of the North West Parks Board.

Its story is one that will be close to the hearts of many guests who have seen things disintegrate during the recent lockdown and offers spectacular hope that all can be repaired and rebuilt with patience and perseverance.

In 1992, the fledgling Madikwe Game Reserve was chosen as the site for Operation Phoenix, the biggest ever government-sponsored game relocation programme in Africa. This involved re-stocking and conserving flora and wildlife which had long disappeared from the region. Over a six-year period, 10 0000 animals from 27 major species were re-introduced to the reserve from other reserves and breeding centres.

The name of the operation – Phoenix – is particularly relevant. Like the mythical bird that burnt itself to a crisp on the pyre and then rose from the ashes to live again, nature quickly regained a stronghold on the land.

Today, Madikwe, boasts year-round game viewing and is one of the few reserves where one can view a wide variety of fauna as well as breeding herds of elephant, white and black rhino, lion, cheetah, spotted and brown hyena, buffalo, leopard, zebra and the endangered wild dog as well as a wide variety of antelope and over 250 different species of birds. 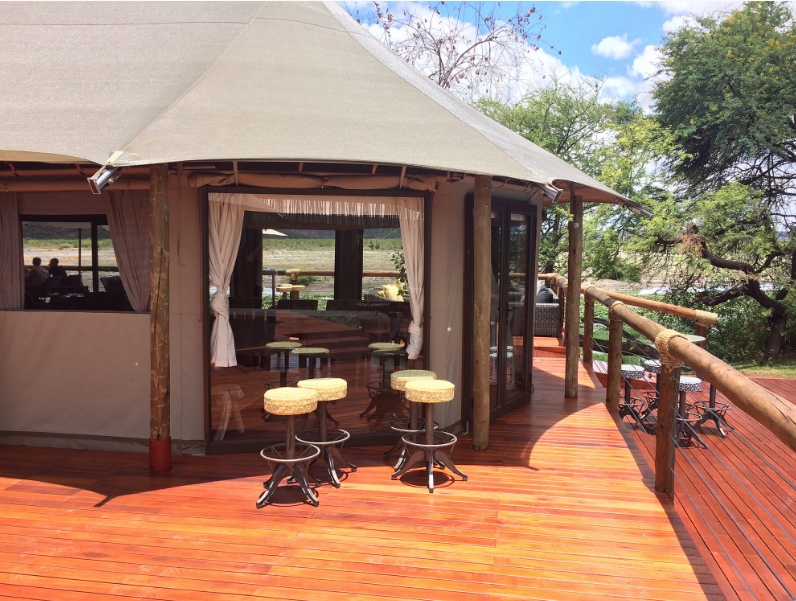 Built in 1995, the Tau Lodge overlooks a natural waterhole and provides plenty of creature comforts for its human visitors.

Thirty luxury chalets are spread out in U-formation on either side of the lodge, offering excellent views of animals approaching the waterhole from the opposite bank. These are divided into standard, luxury and family suites and the lodge also offers a conference and events centre.

Like the entire hospitality sector, the Tau team is carefully managing the challenges of Covid-19 to ensure that all who stay over enjoy perfect peace of mind. Additional health and hygiene measures are in place. Each room undergoes a meticulous deep cleaning before each guest arrives.

The culinary team’s delicious and healthy meals are served a-la carte and tables are spaced apart at an appropriate distance.

To entice stressed South Africans back to the reserve, the lodge is offering a plan and pay now, travel later plan via a variety of special offer vouchers. These include:

The package includes two nights’ accommodation, three meals per day, two game drives per day, drinks and snacks on safari drives, a 30-minute couples back and neck massage (a deep tissue back massage to relax tight, sore muscles), a bottle of sparkling wine in the room PLUS a romantic bed turn-down on the 1st night and all levies. (When booking for 2021, the rate would be R17,780 – actual value R27,960).

For those of us who cannot hit the road immediately, don’t forget the highly addictive Tau live webcam which will keep you mesmerized on: http://taugamelodge.co.za/main-lodge/live-webcam/.