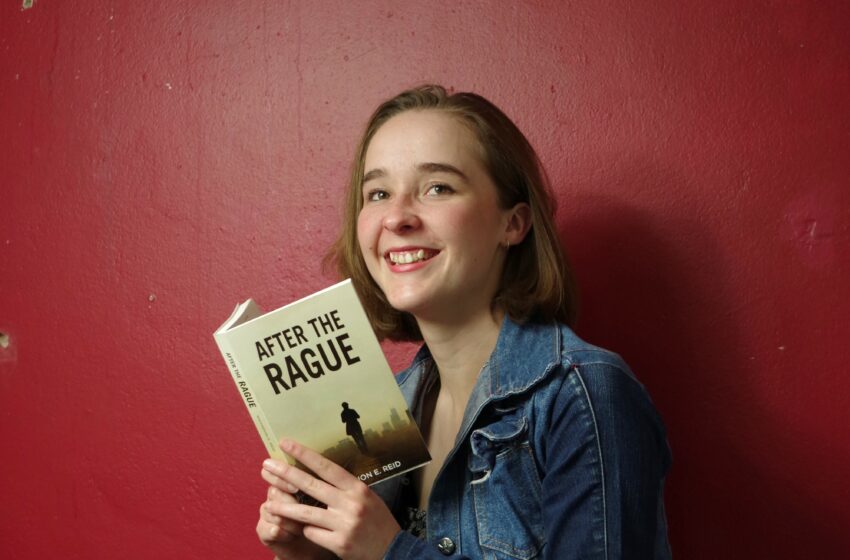 RHIANNON E. REID: AN AUTHOR IN THE MAKING

Everyone has a book in them, they say. But, while most wait until the middle or the end of their lives to begin penning their stories, recently published young author, Rhiannon E. Reid knew from the age of 16 that she was an author-in-the-making.

She published her first book at the age of 20 and has at least seven more in various stages of completion.

“I just love writing stories and creating characters and fictional worlds. It’s my favourite thing ever,” she shrugs.

Although Rhiannon can’t quite remember when she first discovered that she loved stories, she says she was about 12 when she began writing them and she hasn’t stopped since.

As a young child, she describes herself as “a massive bookworm”- something that was to lay an important foundation for her future.

She was also part of what was known as the writing crew at school. This group of friends wrote their stories by hand in notebooks and passed them around. Rhiannon still has some of those notebooks with her first stories written in longhand. 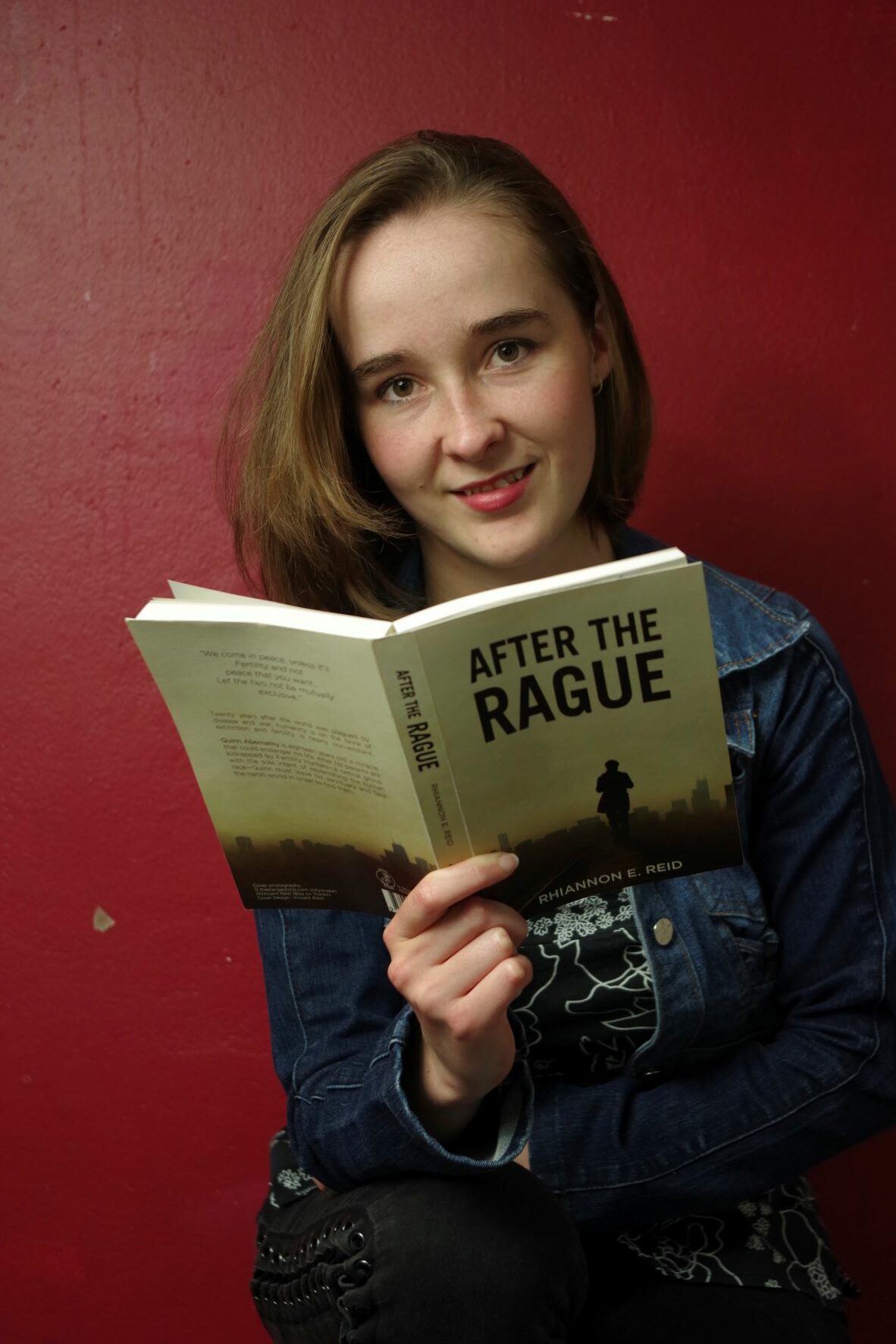 “I decided that I wanted to be a writer professionally when I was maybe 16 or 17 and then I started writing this book when I was 18. Before that, I was writing on paper and showing my friends and they showed me theirs. I told them that I wanted to be a professional writer and asked them if they wanted to be. They said they couldn’t because they were bad at writing. I answered that I was too. When I look back, I probably was but I have really improved,” she says.

Rhiannon completed her first story when she was 15. She says she regarded this first effort as nothing more than “just a story” and didn’t take it too seriously.

“Until then, I’d never really completed a story. I always had ideas but I never finished them because I just got distracted or got writers block,” she admits.

Within a year, writing changed from being “a fun random thing” and her indomitable spirit began to emerge.

“I would read a book and really love it and I thought that I would really like to create something that had that kind of impact on someone else. I thought that it would be amazing to write words and make (an idea) into this amazing story,” she explains.

Once she had discovered that she had something of a calling to write, she says both her writing skills and plots improved. Another major change came when she turned 18 and she received her first laptop.

Whilst completing her matric in 2019, Rhiannon began working on After the Rague. She describes it as a dystopian novel that tells the story of a young man named Quinn who has to find his parents in a dangerous world 20 years after a terrible sickness not only nearly wiped out the human race but left most of the survivors infertile. In doing so, he comes across a group of strangers who could either be friendly or hostile – and could even have ulterior motives as they help him fulfil his quest. 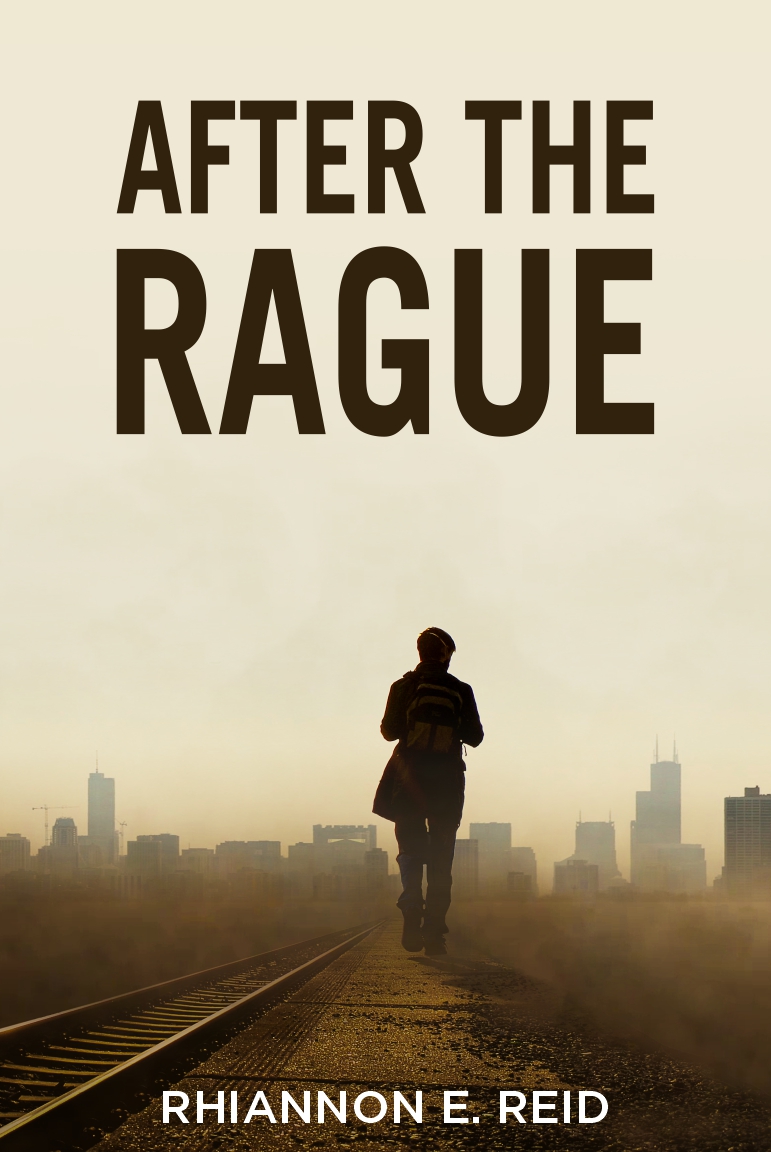 “I knew that I’d love to write a dystopian story and then it just happened. Dystopian and post-apocalyptic are completely different genres but this is both,” she explains.

Ironically, Rhiannon came up with the story idea and began writing before the Covid pandemic.

“It probably has more significance because people can really relate to it. If this had been published before the pandemic, it would not have resonated as much,” she notes.

The big question has to be where and how did she start?

“Sometimes you just have the beginning. Sometimes that beginning is so good that you can’t not write it even if you don’t know how it will pan out. With this one, everything just got filled in as I went along,” she smiles.

The first draft of After the Rague took a few months to take shape.

Ever more certain that she would see this through, she found herself an editor. Five edits followed.

First came a complete re-write which saw Rhiannon change the entire story from first to third person which she admits was quite a feat. Second time round, she says she made what was fast turning into a novel a little “more prosy”.

As she explains: “When I write a first draft, it is mostly just dialogue like a script. After that, I fill in the scenic themes and that kind of thing. That’s how I do it but I don’t think that there’s a right or a wrong way.”

Then, under the watchful eye of her editor, she began reshaping it yet again. A third and even a fourth draft saw her tweaking smaller things.

Asked how much courage it takes to hand over something as personal as your first manuscript to a near stranger and how difficult it is to take criticism, she says she saw this as a positive learning experience and was happy to go along with it.

“When you write a story, you are very involved, almost too involved. That’s why you need a second opinion and a second set of eyes. You can get too engrossed in your own thing and sometimes that clouds certain things. So, taking criticism was fine. My editor told me when she thought something was wrong and, most of the time, I did agree,” she says.

But as the book neared completion and Rhiannon became more confident as a writer, she admits there were times when editor and author were, quite literally, not on the same page. 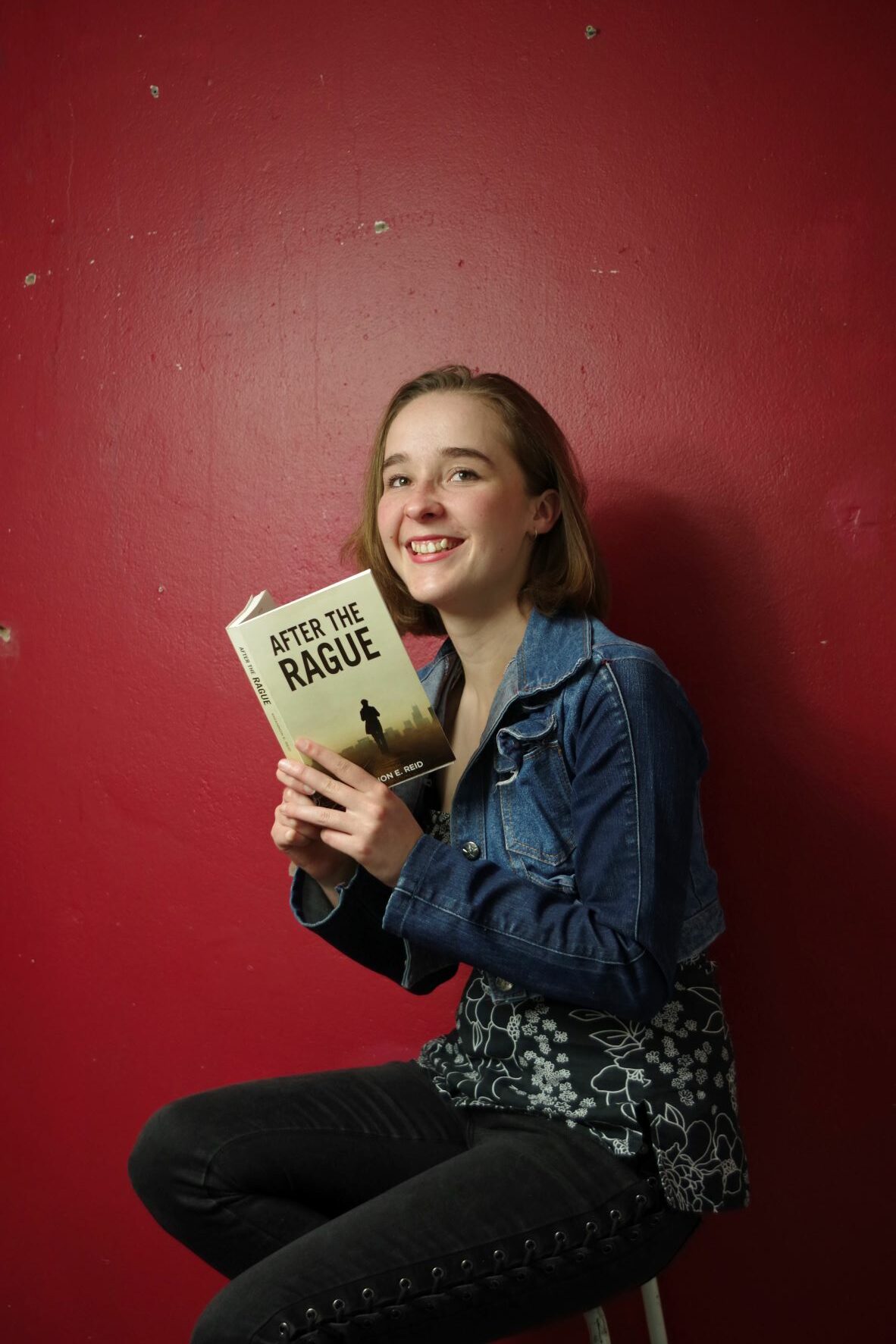 One of the main areas of disagreement was the cover. Graphic artists who were called in to design it either failed to come up with anything at all or produced something that did not quite resonate with the young author.

She says that, almost unexpectantly, her artist father came up with the solution. She accompanied him and her brother Aidan to a nearby train track where they took photographs using the soft late afternoon light to capture the shadowy and moody surrounds behind a single figure in silhouette.

A stock photo was added and provided the background skyline and the whole atmosphere was enhanced using Coral draw,” she explains proudly.

After the Rague is available for online purchase on Rhiannon’s website as well as various markets around the Midlands.

DECIDING TO SELF PUBLISH

Deciding whether or not to self-publish is difficult enough for an adult. For a teen contemplating publishing her very first book, it took a unique confidence to go this route.

“I knew about all of the rejection that could come with publishing. I knew the possibility of trying to get it published and finding that no-one will do it for you. Then, the story would be abandoned. But as soon as I found out about self-publishing, I realized I could do this no matter what,” she says.

But it proved quite a learning curve.

Despite being part of a generation that reads mostly e-books, Rhiannon chose to actually print her novel.

She describes the moment when she received the first draft copy. “It was just insane because it had been my ultimate, ultimate dream. Not everyone has their ultimate dream come true.”

Her artist parents Vincent and Tess, who have backed their talented young daughter all the way, have been an integral part of the realization of this dream. The creative and close-knit family even play together in a family band and Rhiannon fronts it on guitar and vocals

Rhiannon’s first print run arrived in October last year and she officially launched After The Rague at the end of 2021.

She also intends selling her book on line. I will still do an e-book. But I wanted to sell physical copies first. I don’t read on line, so this choice was a personal choice. I really enjoy taking my books to markets. I love talking to people about the book and signing copies.”

Already, she has received a lot of positive feedback.

LOOKING TO THE FUTURE 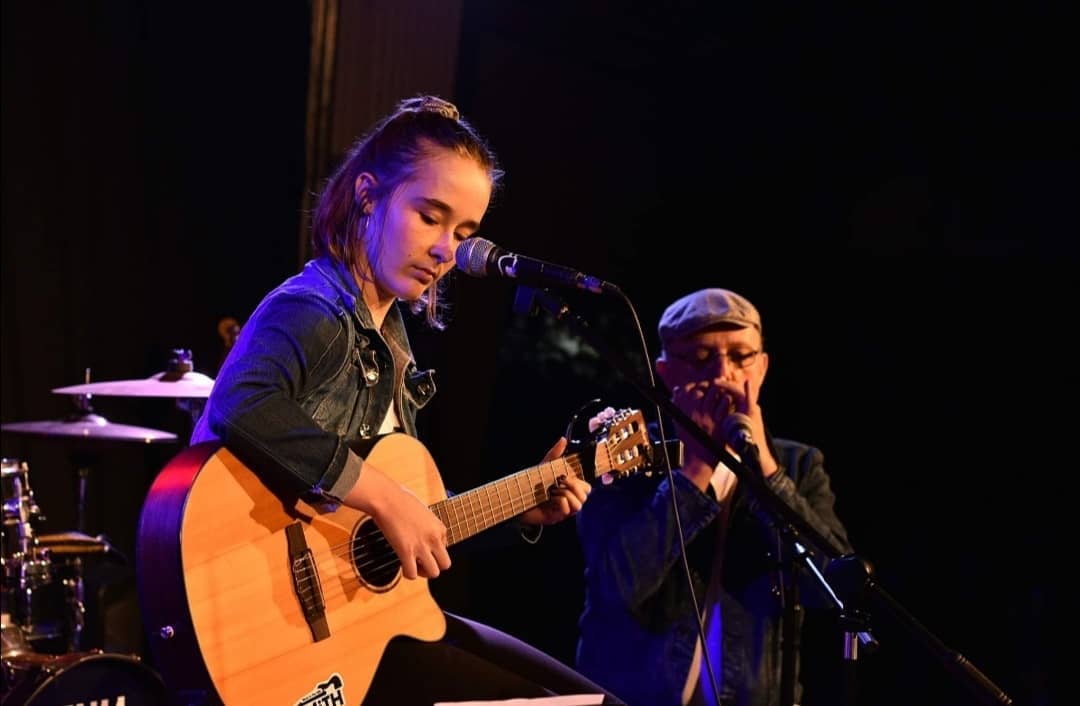 Rhiannon is already working on her next book. She’s just not sure which of her stories will reach completion first.

”In 2021 alone, I came up with seven new ideas which I would like to take out there. That happens all the time. I come up with new ideas and, before I finish one, I come up with another. I’m not sure which one will be released this year.”

Beyond the Rague has a prequel in the making but there’s still a long way to go. She’s also working on what she describes as a dark fantasy.

“It’s going well so far but there’s still so much that can still happen. Dystopian novels are not going to be my main genre. It was simply the first story of mine that I really had faith in. A lot of my books are very different from each other. I want to just be me.”

In between, she’s sharing her experience with young writers such as the Young Authors Book Initiative.

“I tell them that self-publishing is an option. Unfortunately, a lot people don’t believe in it and look down on it.  But there’s nothing wrong with it at all. It’s just not the conventional way. If writing is something that you love and you are passionate about it, this is how you can do it. I’m proof that you don’t have to wait until 30, 40 or 50 to write your first book. You can do it now.”