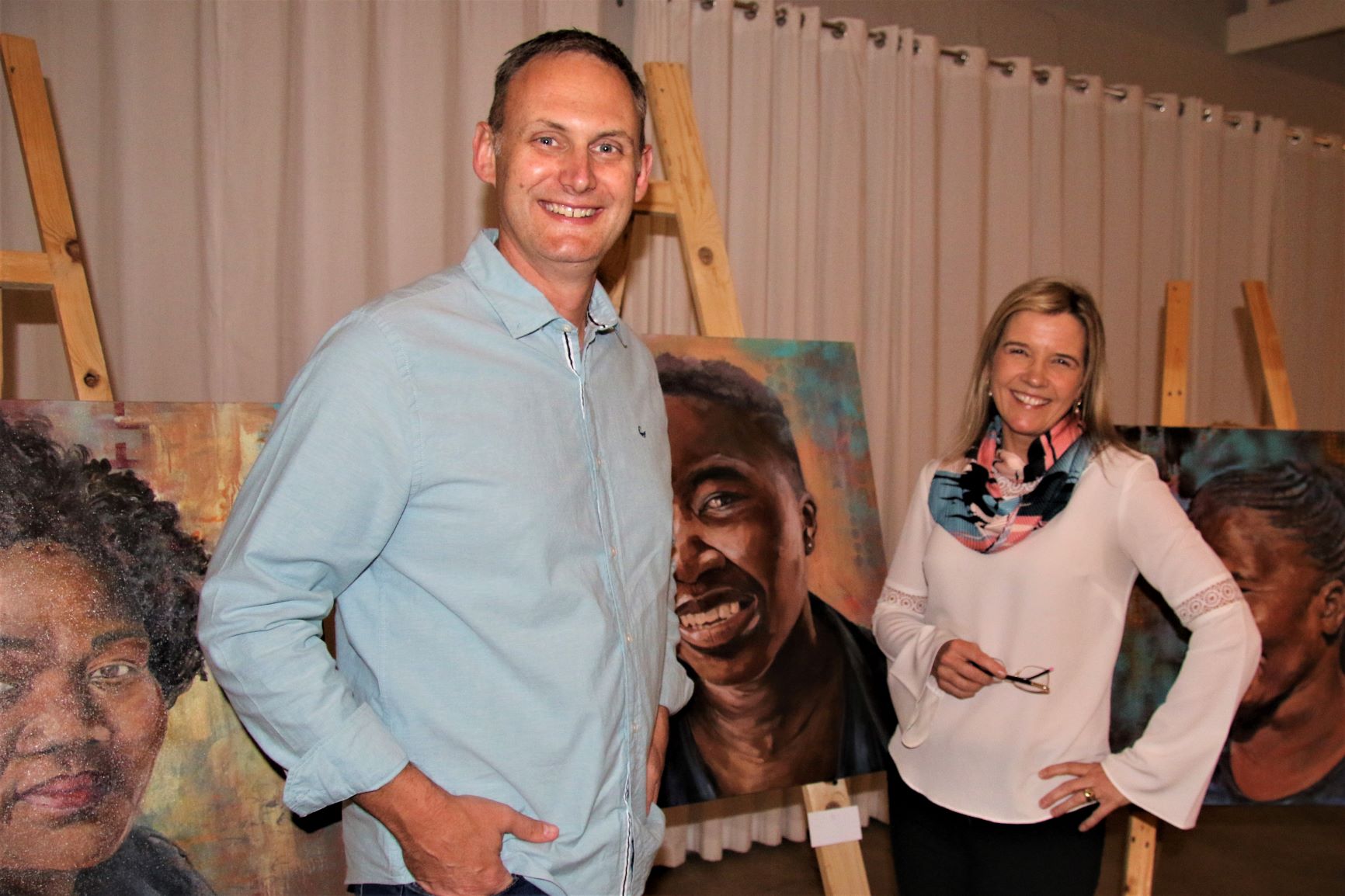 “An interruption like the global pandemic can either be an irritation or an invitation. I responded to that invitation with an act of creativity which raised my own human spirit out of a malaise of despair. I found order in the place of chaos and I found my own spirit raised to a place of transcendence. So, I trust that as you gaze on these portraits and take the time to really see them and not just look at them, you will be reminded too that you also matter to God – that he knows your name, that you too are more than just a number.”

These were the words of professional fine artist, Laurie Glenny, who created and donated 12 portraits for auction by the CityHill Church’s Nation Changers initiative to raise funds to complete a new development and distribution centre which will not only host educational and other outreach programmes but store food that is distributed amongst the hungry in surrounding communities.

By the end of the evening, over R200 000 had been added to the funds raised to date.

The new distribution centre will also be home to The Clothing Box, an innovative entrepreneurial development initiative that not only trains local people to build their own businesses but also to help restore the self-esteem and address the hopelessness of the poor.  To date, over 122 entrepreneurs have been empowered to start their own businesses.

As explained by Nadine Wright, who heads up The Clothing Box, a mentoring system that connects each “shopper” with a mentor who can address both their personal needs and business success, can change lives.

Each person that approaches The Clothing Box completes an application form and is placed on a waiting list for ‘black bags’ which contain good-quality second-hand clothing. The applicant must be unemployed or earn a maximum of R1000 per month.

Clothing donations are collected at CityHill Church from schools and other sources, including retailers such as Mr Price which donates returned and end-of-range clothes.

These are sorted and a mix of men’s, women’s and children’s clothing is put into each bag. The first bag is given free of charge. Thereafter, each bag shopper pays R50 per bag. They can re-sell the items for between R200 and R400. A record is kept for each shopper and, when the organisers are sure that they are serious about selling the clothing to generate an income, they graduate to shopping in the Clothing Box Shop where they select clothing items.

“Our aim is not to create dependence with people relying on the provision of clothing to sell from the Clothing Box, but to build them up to become true entrepreneurs who start different types of businesses and in turn empower others. We’ve already seen success in that ladies who have been a part of our skills development group are now teaching others to sew.

“We’re looking forward, with great anticipation, to the Above and Beyond Nation Changers Distribution facility which will enable us to upscale the Clothing Box and assist many more people as they strive to learn and be economically empowered,” Nadine wrote in City Hill’s Culture magazine. 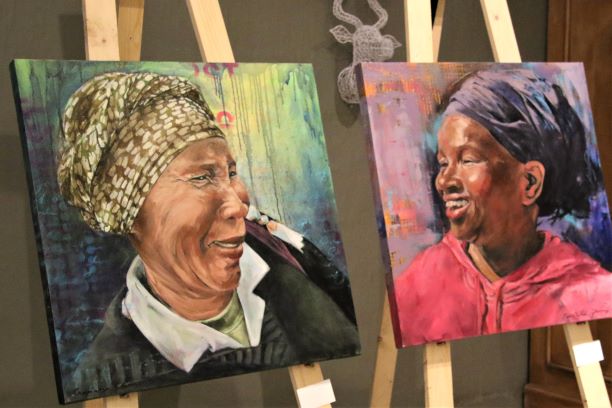 PORTAITS THAT ARE A PERFECT FIT

Although, on the night of the auction, Laurie was adamant that the evening was not about her, her outline of the process of taking pictures of The Clothing Box’s success stories, learning their individual stories and reflecting them as she created each individual portrait speaks to the need to restore the dignity of disadvantaged people across a country that is plagued by poverty and unemployment.

As an artist without a fixed monthly income, Laurie decided not to pledge a monthly contribution to the fundraising for the new distribution centre but to instead use what she had on hand – paint and paintbrushes.

“Then lockdown happened. I didn’t have canvasses because no shops were open, so I ended up using what I had in my studio – paper which I then had to strengthen to provide a strong, sound foundation for the oil paints. I used a substance called gesso which also created interesting textures. I just grabbed some odd stencils that I had in the studio to build up some sort of interesting background so it wasn’t just scraped or brushed across,” she explains. 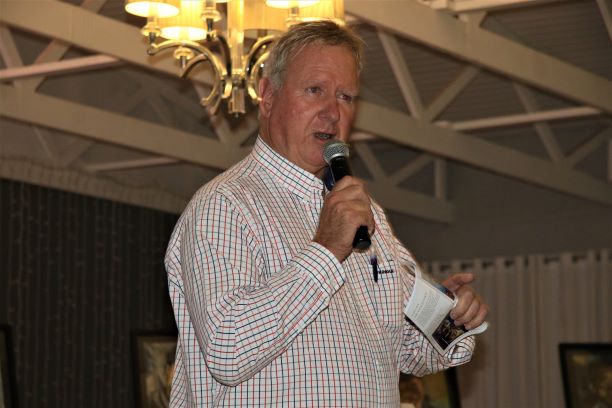 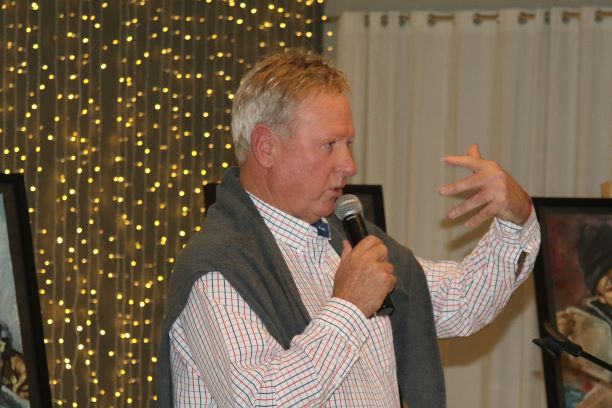 She explained that, as she began painting each portrait, the symbolic significance of the layering started to dawn on her. People on the forgotten fringes of society, many of whom could not read or write, often felt like no more than numbers among the sad statistics of poverty. So, by the simple act of pushing these numbers and letters into the background with the use of her paintbrushes and oils, she felt that she was highlighting hope and giving these people the dignity and recognition that they deserved.

Asking those attending the auction to celebrate the stories behind her portraits, Laurie continued: “We are surrounded by people every day who are desperate to know that you see them and that they matter. These are people like Margaret who, at age of 74, is learning to read for the first time, (another of our ladies) who has a smile that lights up a room – but she should have been yet another child trafficking statistic had she not escaped from her captures on our doorstep in downtown Pinetown and Stanford, a refugee from Malawi who rides his bicycle many miles to and from the Clothing Box depot every week.”

These lovely people have become more than just numbers to me. As I stood in front of my easel adding layer upon on layer, brush stroke after brush stroke of paint to build up each of these portraits, a heart of compassion rose up from the inside of me and I found myself praying for them and feeling moved by their presence.”

One such story is that of Gertrude, whose portrait was sold at the auction. Through the Clothing Box, she has not only created a sustainable income for herself and her family but has also inspired others in her community to set up similar businesses.

Nadine explained how her action had allowed those involved in the initiative to see the most “incredible ripple effect of somebody touching one person’s life and that person touching another.”

In a video screened during the auction, Gertrude told her story: “I come from Zimbabwe. I came to South Africa in 2016. When my husband lost his job, things were very hard for us. With my husband not working, I couldn’t afford to buy Pampers for my baby. I was coming to CityHill Church and they asked me to come to the Clothing Box and buy a bag for R50. Since then, things have changed. I can now afford to buy clothes for my children and to send them to school.

“I was staying inside my house, not able to go out and see other people because I was looking down and couldn’t do anything. When I started to have my own money, I was able to talk to other people. Now I’m able to inspire others. I have built my own shelter for selling clothing and (people who bought from me) have followed me and also built their own business. I want to thank Nation Changers for making me the person I am today,” she said.