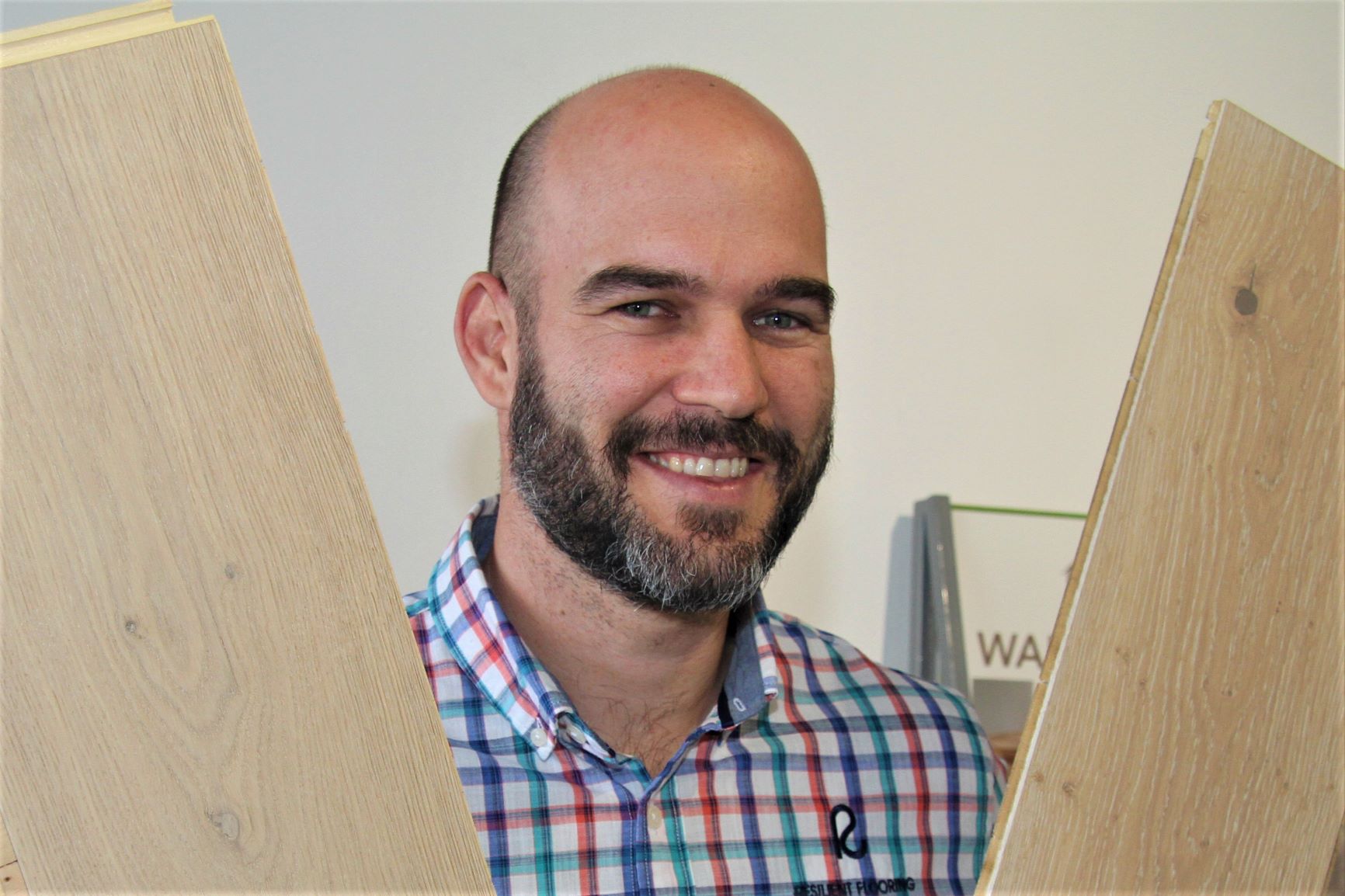 FLOORED BY A RESILIENT ENTREPRENEUR

When people grab a cup of coffee at Lineage Coffee in central Westville, they come across a fascinating array of flooring in a shared space that speaks to the growing fascination with interior décor.

As most know, the flooring business has changed radically since Resilient Flooring, the company that is sharing its space with a coffee bar and interior decorating company, started out in 1993.

Those were the days of wall to wall carpeting in practically every room and the age of big corporates and brands such as Romatex and Van Dyck.

Since then, the world of flooring has changed completely. Carpets have been replaced by ceramic tiles and ultimately, hard wood, vinyl, engineered wood and even polished concrete. At the same time, the market has evolved as a passion for renovation and interior décor has been driven by dedicated home and garden television channels.

Resilient, too, has moved with the flooring times and is making great strides under the watchful eye of “resilient” entrepreneur, Pascal Marot.

Resilient Flooring was created by entrepreneur, Steve du Preez who had a strong background in the flooring business. The company grew until, in 2017, du Preez met up with Pascal to suggest that he take over the business so that he could move on to other ventures.

Pascal wasn’t convinced that this was the path for him. “I left the meeting thinking no, this is definitely not what I am looking for. But it didn’t leave me and, literally, two weeks later, I called him and said that I never thought I’d take him up on it, but I was interested.”

Having completed a degree in environmental management and spent time working for an engineering consultancy before joining his father’s business, Supa-Slab, Pascal had a sound business background.

Supa-Slab was one of the very first KwaZulu-Natal companies to supply suspended slabbing systems and he started out in sales, working his way up to becoming sales manager and ultimately running the company for two and a half years.

Nevertheless, Pascal admits that he felt that there was still something more for him to do and, backed by his wife, he decided to take a few months off to figure out just what that was. 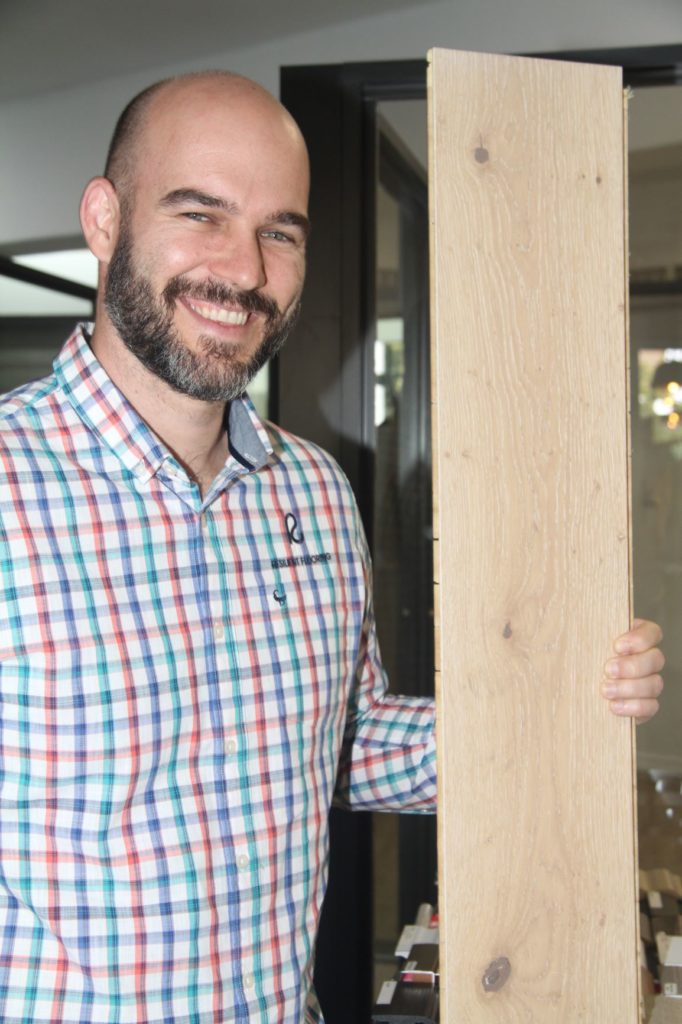 By October 2017, Steve and Pascal were hard at work repositioning Resilient Flooring.

“There was lots of ground work to be done. But we just started engaging and putting things in place. I guess I brought a useful energy to the business,” he says.

Although Steve was able to share much of his carpeting expertise with Pascal, the two explored all the newcomers to the market together and learnt along the way.

“When I joined him, I started poking my head around and seeing what was popular and happening. I was coming up with products that were not brand new but weren’t his focus. So, we started engaging with the suppliers and finding out who was leading the charge.”

Today, those products are part of Resilient’s offering together with trusty wall to wall carpeting which is still fitted mainly in bedrooms and the odd lounge.

The company itself now operates from a collaborative space in Church Street in central Westville which is home not only to Resilient but to interior decorating business, Fabrique, and fronted by Craig Charity’s Lineage Coffee.

I’ve always loved my coffee. Having lived in Westville for nine years, I decided that the suburb needed a really good coffee, so I began chatting to an old school friend, Craig Charity, who had coffee shops in Hillcrest. He had considered it but hadn’t found the right spot. So, when we decided to create a showroom for Resilient Flooring, I suggested that we opened up a coffee bar.

“The space here was actually a little bigger than we needed, so we cordoned off an area to rent out. We originally rented out to a plumbing company and, when that business moved on, Carmen Robbertse and Fabrique joined us, creating a really nice synergy.”

Pascal has thrived on this dynamic. “I like collaboration. I’m not a lone ranger. I would love to create a team around me where we share the same vision and goals and can grow this into a business that can serve everyone, Pascal adds.

THE FUTURE OF FLOORING

On a similar note, Steve remains involved in the business, although now largely as a consultant when the company is working on large projects and tenders.

His role as mentor and advisor is important to Pascal. “I’m not the type of person that is insistent on going at it alone. I work better in community and through collaboration. That’s my game. If I have someone as a sounding board, that’s when I do my best work,” he explains.

Pascal also admits that he is a perfectionist. “That doesn’t mean what a lot of people think it means. For me, it means that I’m almost incapable of running a business where I am happy with average. Even at the company I was with before, wherever I saw areas that needed improvement, they would be the areas that glared at me. They would weigh on me. I’ve brought that into Resilient Flooring.”

He says he has learnt a lot during his entrepreneurial journey. 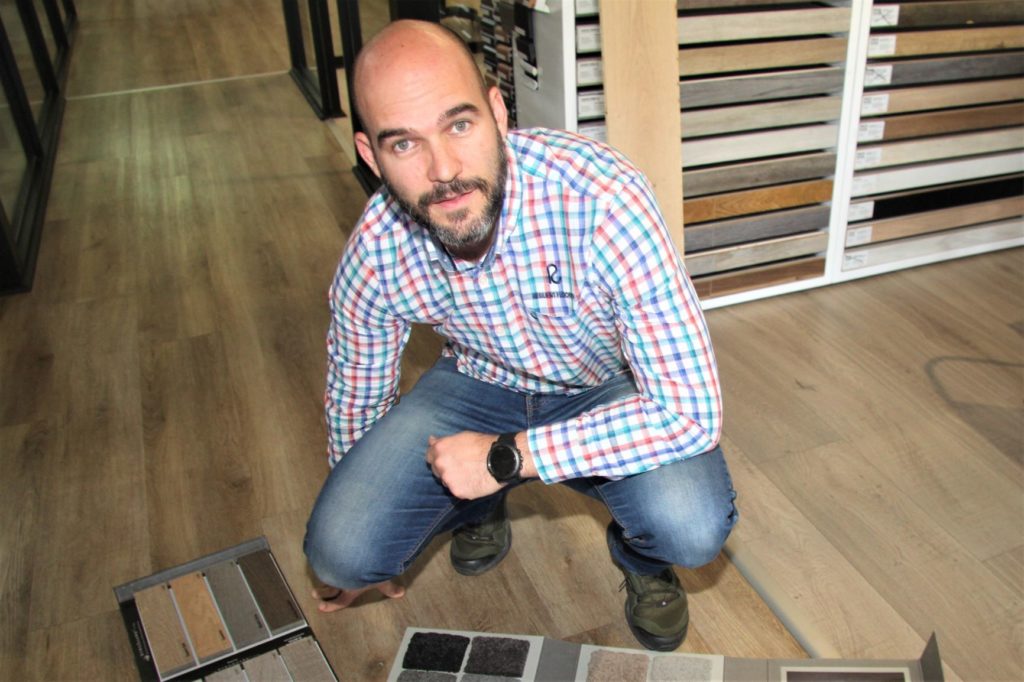 “When something happens, I react. It takes all of my focus and I want it resolved it asap. Sometimes that is not always possible. The thing that I’ve learnt is to accept that things are going to happen and that I need to respond instead of react. There’s a big difference between the two. If you take a step back and reason as opposed to reacting, there is a solution. It just takes calm.”

One such happening was the Covid-19 pandemic and lockdown. Although there was some so-called “essential” work out there, Pascal chose to close his doors for two months.

When restrictions were lifted and the company resumed work in June, it clocked up its best month ever as enquiries received during lockdown and quotes sent out at the end of February were accepted.

He remains busy and optimistic and is confident that Resilient will live up to its name.

I’m not a futurist – the type of person who will look ahead and give you a very detailed five or 10-year plan. I ‘m more of a here and now type, what’s a called a maximizer and a developer. I look at now and see what we could be doing better and in the short term, what we can do to sort that out.”

But he does see a bigger picture. “I don’t just put all my faith in what I can do and what I have created. I love the Lord and that’s a massive part of my outlook on life. I hate clichés but he has provided for us in the most unbelievable way even though lockdown. I know that, if I continue to do things with integrity and that if I honour people and this business, it will go well and God will be with us every step of the way.”