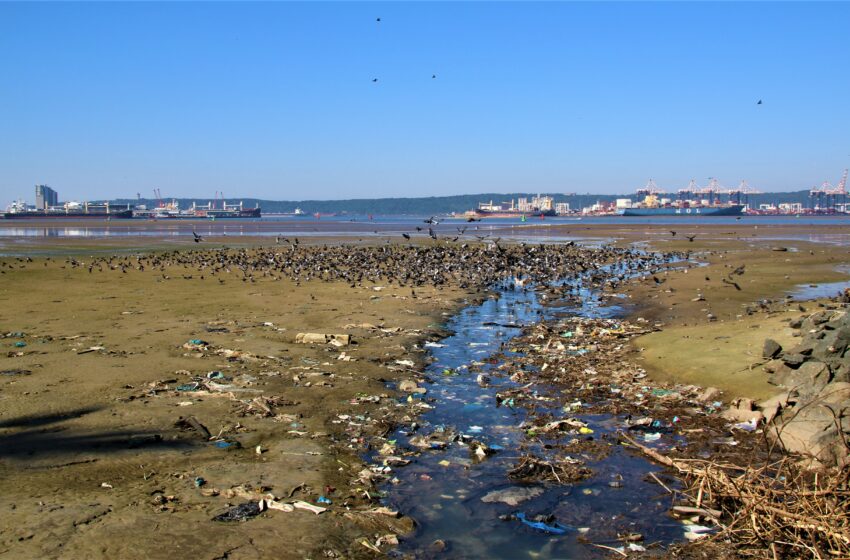 Rivers should be maintained like infrastructure, Geoff Tooley, senior manager, Catchment Management for the eThekwini Municipality, said shortly after the April floods in Durban. Never a truer word.

The only problem is that, like our potholed roads, unstable power grid and virtually non-existent public transport system, this form of ‘natural’ infrastructure has been neglected and abused to the point where much of our natural water is so toxic that those who have no access to potable water risk their lives every time they use it.

A sewerage spillage in the Isipingo River recently saw large numbers of dead fish wash up onto nearby beaches – but a little research will soon turn up the fact that chemical pollution, together with municipal sewage spillages and general waste have plagued the catchment for decades.

Immediately after the April deluge, the municipality reported that only one (unidentified) river in the whole of the city had not been impacted by sewage spills stemming from damaged sewage works. The extent of repairs made subsequent to that remains a mystery.

The general consensus is that basic sewage infrastructure has been failing for some time and that the April floods could not be blamed for lack of maintenance.

Every year, there are concerns about E. coli levels ahead of the staging of the Dusi Canoe Marathon. As far back as 2013, Durban’s signature Umgeni River was declared one of the most polluted in the country.

Apart from the unseen nasties dissolved into the city’s river water, there is also a mother lode of plastic based waste with rivers such as the Umgeni acting as dumping grounds for everything from household waste to industrial trash. These same rivers act as conduits, spreading the rubbish downstream and, ultimately, into the sea.

“Make no mistake. Access to clean, healthy water is a fundamental human right. Clean water is essential to life but it is a scarce resource in Africa. The causes of water pollution, and its effects on people, flora and fauna, is currently one of the biggest environmental threats to Africa.”

Every year, tons of waste is regularly dumped into Durban’s Umgeni River, impacting the water quality and posing health threats to wildlife, fisher folk, paddlers and others who use the river daily. A major contributor to this excessive waste is illegal dumping, a problem that a group of concerned stakeholders are addressing as part of World Clean-up and International Coastal Clean-Up campaigns in September.

This large-scale operation has also welcomed several other stakeholders on board including BMS Foods (Bluff Meat Supply), Multiquip, AlcoNCP and the eThekwini Municipality. The team will work together to not only address the existing waste, but restore the land and put in place measures to prevent further dumping.

“We have identified numerous cases of illegal dumping over the years, including the misuse of the park area adjacent to Umgeni River. It was evident the threat it posed to the environment, as well as the hazard it brought to the businesses in the area as well, but nothing was being done about it,” explained Stamatis ‘kapsi’ Kapsimalis, CEO and owner of Reefer Cold Storage.

Kapsimalis explained that they had contacted Janet Simpkins of Adopt a River to assist. This NPO focuses on rivers and environmental spaces in KZN, connecting with like-minded groups to address the many river health issues for each community. They partner with individuals, agencies and corporates with a shared environmental passion, working together to create sustainable differences in these threatened environments.

“Through much effort and negotiating, Janet and her team have organised a week-long clean-up, with our focus being on the Willowfield Crescent Rejuvenation We’re encouraging other corporates to get on board and consider contributing to this far-reaching cause,” continued Kapsimalis.

Commenting on their involvement, Janet Simpkins said: “We were called in to assist with the illegal dumping as the corporates operating in the area were concerned about the environment. Hand-in-hand, we’ve followed due process and worked with the municipality to resolve this the best way we can. This is a culmination of how effectively municipalities, corporates and NPOs can work together.”

The river clean-up campaign’s short-term goal is the week-long clean-up of the riverside area between Connaught Bridge and the footbridge along Willowfield Road of waste and alien invasives.

However, the plan is to take this further by establishing a permanent team to conserve and maintain the area as an ecologically friendly environment, while creating awareness about the dangers of environmental pollution. Communities and businesses would be encouraged to monitor and report on any challenges such as illegal dumping so that measures can be taken.

Communities are encouraged to come out and join the clean-up efforts on 17 September.

The recent actions of big corporates are in stark contrast to the ongoing river rescue efforts of local communities  which have been quietly cleaning  many of Durban’s rivers from as far back as 2011.

A recent announcement of a €12.4-million project preparation facility co-funded by the European Union, the Swiss State Secretariat for Economic Affairs (SECO) and managed by Agence Française de Développement (AFD) suggests that the eThekwini municipality’s Transformative Riverine Management Programme (TRMP), could provide a more lasting solution to the city’s water woes if it is supported by local businesses and residents.

TRMP is based on the Sihlanzimvelo Stream Cleaning Programme, which started in 2011.

He explained that an enterprise development model was used to create the initial programme to motivate community members and assist with the creation of community-based co-operatives.

Sihlanzimvelo’s enterprise development model stemmed from limited municipal resources within the departments of the city who had various mandates to fulfil in the riverine corridors. Co-ops with eight to ten members were trained to safely remove alien vegetation and solid waste from a corridor, which extended three metres either side of the water for a 5km stretch of river. They also reported sewer leaks, blocked manholes, illegal dumping and pollution evident in the water.

Durban currently has 105 active co-ops who report to locally based assessors who are trained to support them and assess their progress according to pre-agreed requirements. Each co-operative is paid a percentage of the fee due according to an agreed standard of cleanliness and river clearance achieved.

The stretch of rivers under maintenance has grown from 295 kms to 525 kms with work completed in KwaMashu, Inanda, Ntuzuma and Umlazi, creating clean public spaces suitable for recreation.

The programme has created 800 jobs and saved the city millions of rands as there had been no damage to road culverts and associated infrastructure in the run up to the recent floods.

Post-flood reports revealed that areas managed by locally based co-operatives under Sihlanzimvelo experienced little, if any, damage during the event, said Tooley.

But it also uncovered some unexpected information, too.

The video footage and photographs taken from helicopters the day after the flood showed that the majority of damage was caused by alien vegetation, rather than plastic river pollution, which accounted for just 30% of infrastructural damage.

Shallow-rooted alien vegetation washes away easily, leaving large portions of river embankment exposed to erosion. This resulted in more debris and silt in rivers and in the port.

Tooley said that, in 2017, the port had remained closed for three days after heavy rains with vegetation accounting for 65% of what prevented ship movements in the port – 35% was solid waste. In 2022, the municipality reported 70/30 split in culvert blockages.

eThekwini has developed a R8 billion business case and cost benefit analysis for using this model to manage the full 7400 km of rivers and streams across Durban.

Initial project research shows that, if the project was rolled out over the full 1 200 kms of rivers and streams crossing municipal land, this would cost R92 million to run but would provide an estimated R177-million in benefits to the city, creating 1 500 jobs.

Reflecting on this, Tooley suggested that this was a conservative estimate. “We haven’t even costed in the additional green economy opportunities. What this translates to is that, for every rand we are spending, we are creating benefits worth R1.92.”

The biggest challenge, though, is that due to the Municipal Finance Management Act, the city cannot use its resources to clean up rivers on privately owned and tribal trust land, hence the need for both public and private investment.

Research along the Ohlanga River (extrapolated for the whole city) revealed that R 7.5-billion in public and private investment is needed to expand the program to all rivers within the eThekwini area over the next 20 years.

“We would multiply that investment by 1.8 to 3.4 times in terms of municipal and societal benefits – and, again, that excludes green economy opportunities,” said Tooley.

and business opportunities. A paver made from plastic, glass and sand retrieved from rivers is as strong as concrete and ready to go to market. This building material could be strengthened further using fibres from the harvested vegetation.

Tooley said that business training was seeing co-ops diversifying into other small businesses and even employing others to clear the rivers.

The next step is to identify partnerships and role players within three spaces – the Umhlangane River catchment, the Palmiet River catchment and the Umhlatuzana River catchment – and to develop on-the-ground implementation plans that will serve as a blueprint for businesses and property owners to fund co-operatives to clear rivers and streams on private land. 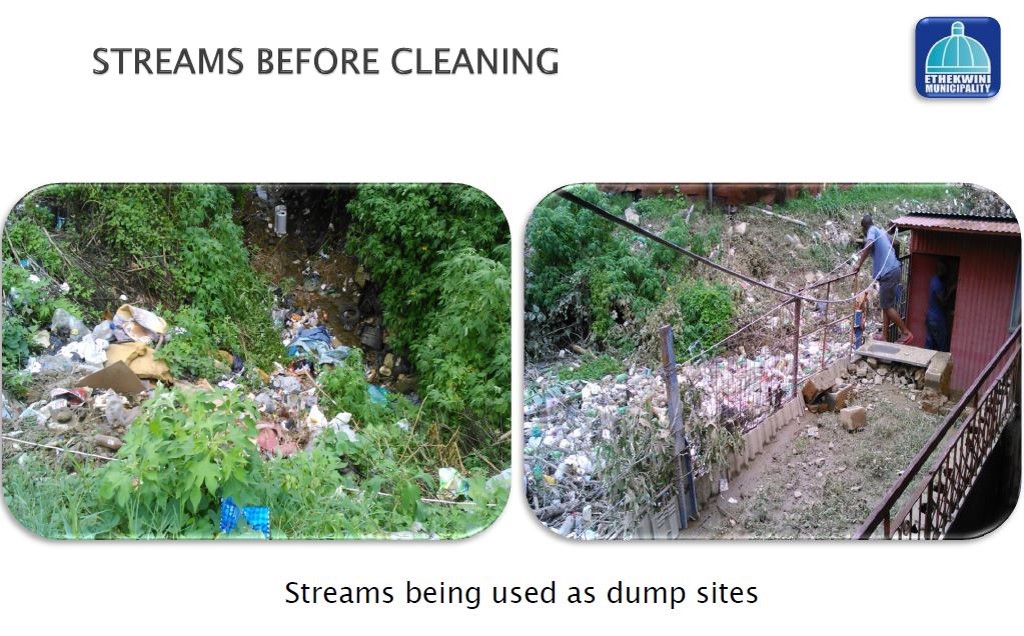 Zoé Ramondou, AFD municipalities and urban development team project manager said that AFD was happy to support this initiative. “We hope that the study we are funding will deliver very practical tools to facilitate planning and management of these catchments. We look forward to helping demonstrate that nature and community based solutions cost less, save a considerable amount of money by preventing damage and managing risk with the added bonus of positive outcomes within the green economy through job creation. This project will also illustrate how these solutions can be combined with ‘grey’ infrastructure and improve efficiency and sustainability.”