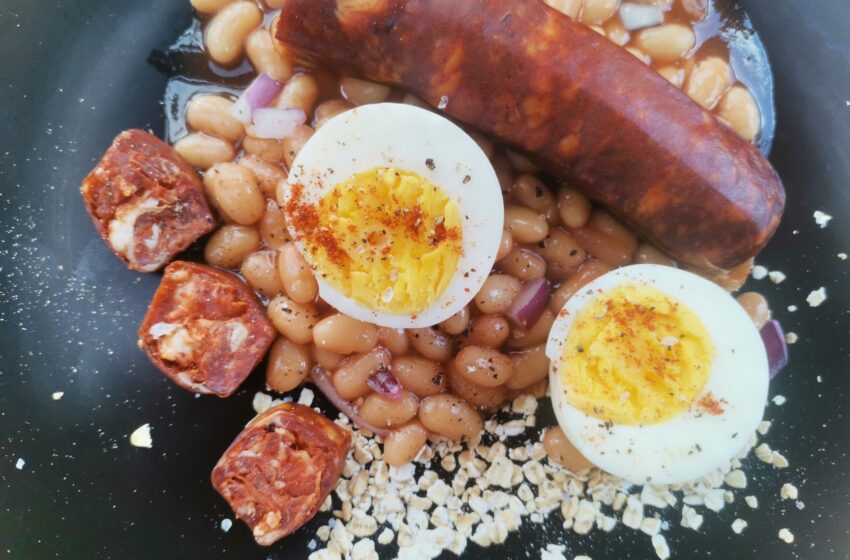 I guess that food and language have been closely linked since time began and, as a chef and food writer, I have always enjoyed playing with both food and words. The marriage between words and recipes goes without saying. Conjuring up the names of dishes for menus needs accurate descriptions that are well seasoned with wit and wisdom. Pencilling in some specials takes plenty of creativity and perhaps even some humour.

What I’ve always enjoyed most, though, is the old fashioned oxymoron. I am told that the word itself stems from the Greek words oxy – meaning sharp and acute – and moros, meaning dumb and foolish. There’s also, apparently, no record of the Greeks ever having used oxymorons! 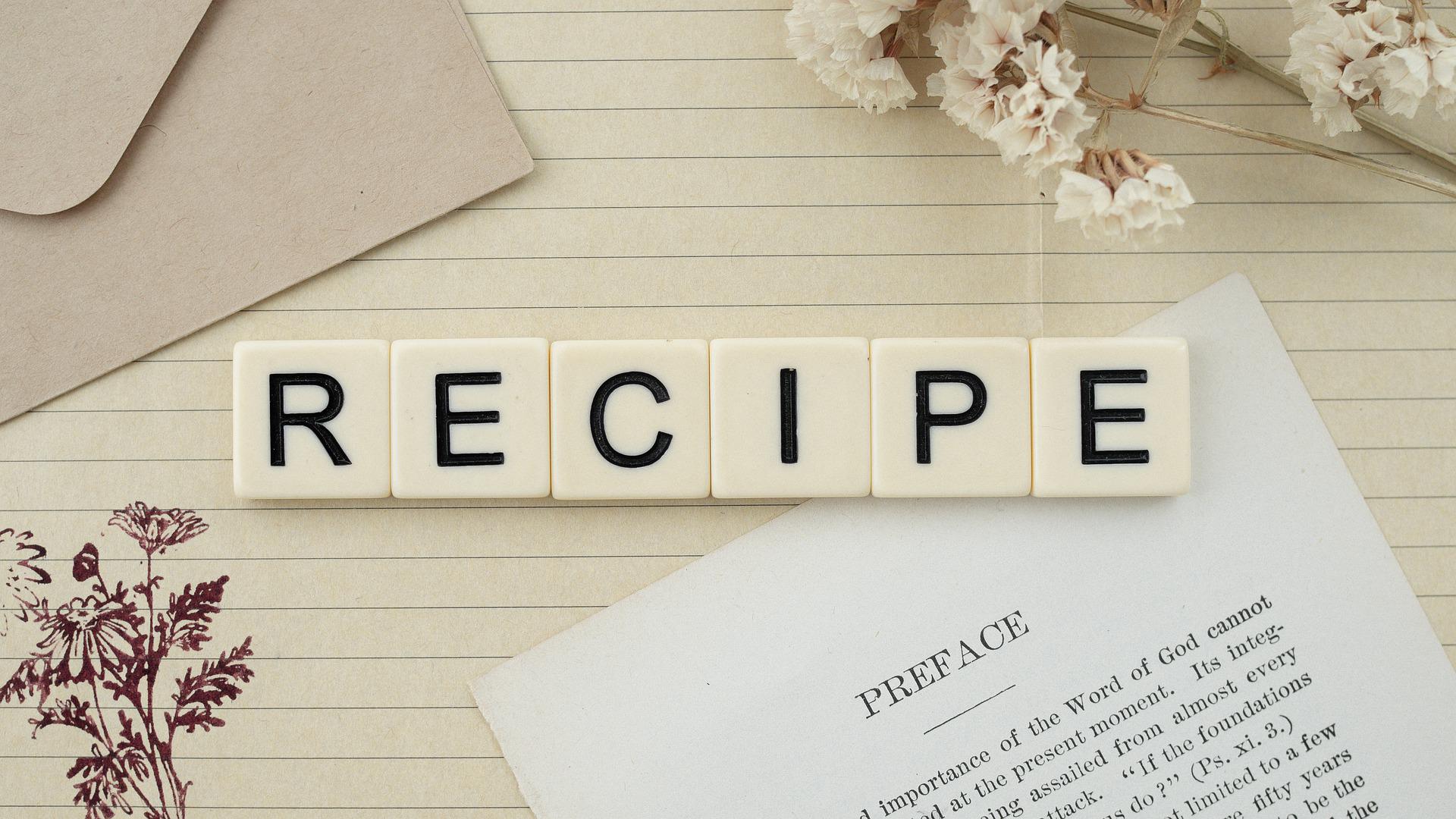 Today, I decided to fire up my frying pan (and other appliances) to cook with oxymorons – so brace yourself from some awfully good food! 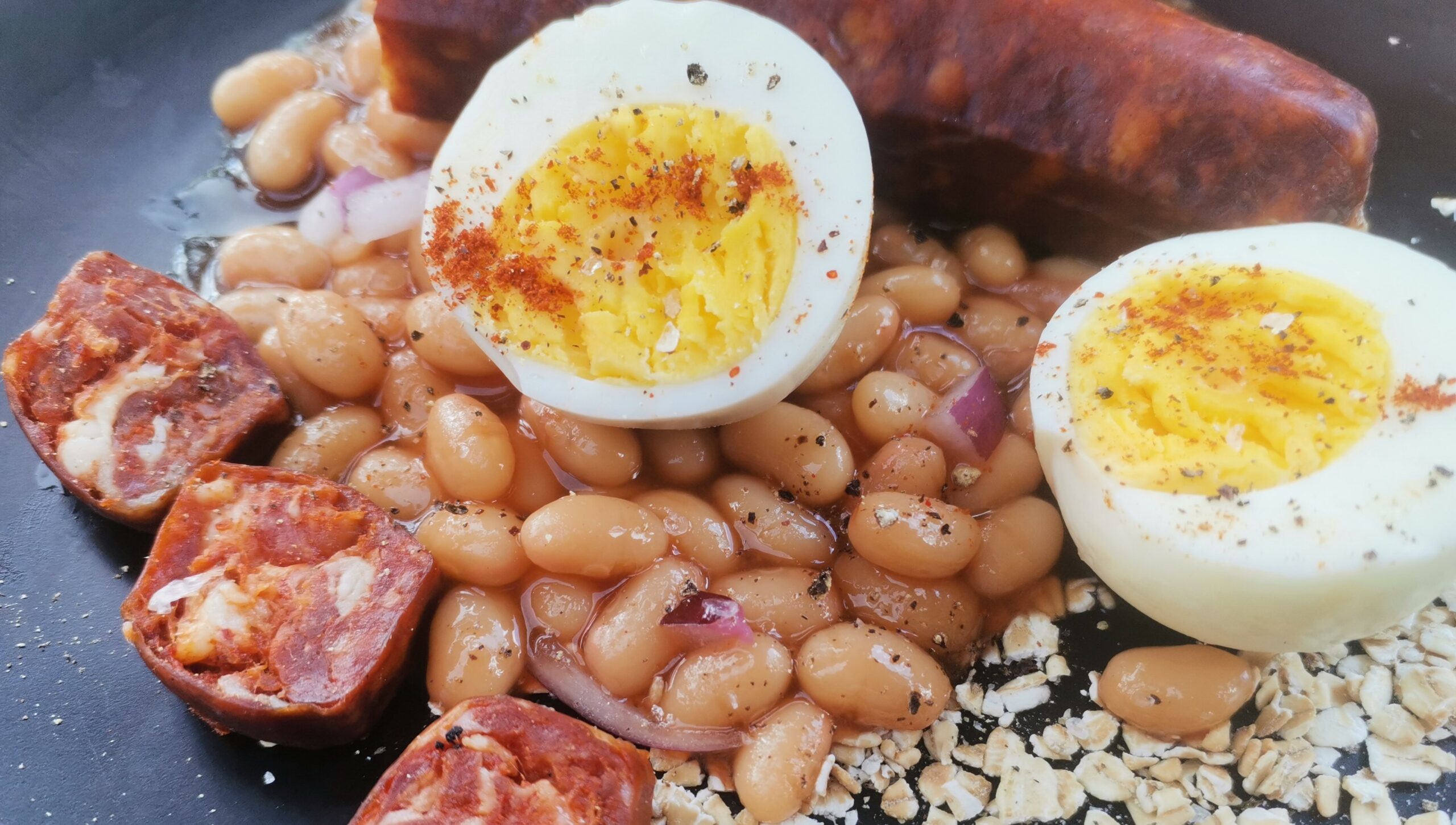 In my cooking book of oxymorons, this has to be a winner that perfectly combines my black humour and culinary skills.

This humble European sausage – better explained as blood sausage – hails from Great Britain. But unappetizing as the concept sounds (hence the addition of tempting pudding I suppose), there are also indications that it may have also begun in Germany or Portugal.

Traditionally, this sort of sausage consists of fat, grain, cereal, oatmeal, seasoning and a pint of cow’s or pig’s blood. I guess it’s more or less their version of our tripe. I’m not a fan and, to my mind, this deserves to be the one that shifts the moron ahead of the oxy.

Interestingly enough, for the carnivores, black pudding has recently been labelled as an international super food, probably due to the high levels of iron and protein.

During a meeting with my trusty butcher, we hatched a plan to go with the Porto option – same concept, but as a chorizo take on the dish. That made it a little more palatable and I served it with some baked beans and boiled egg. 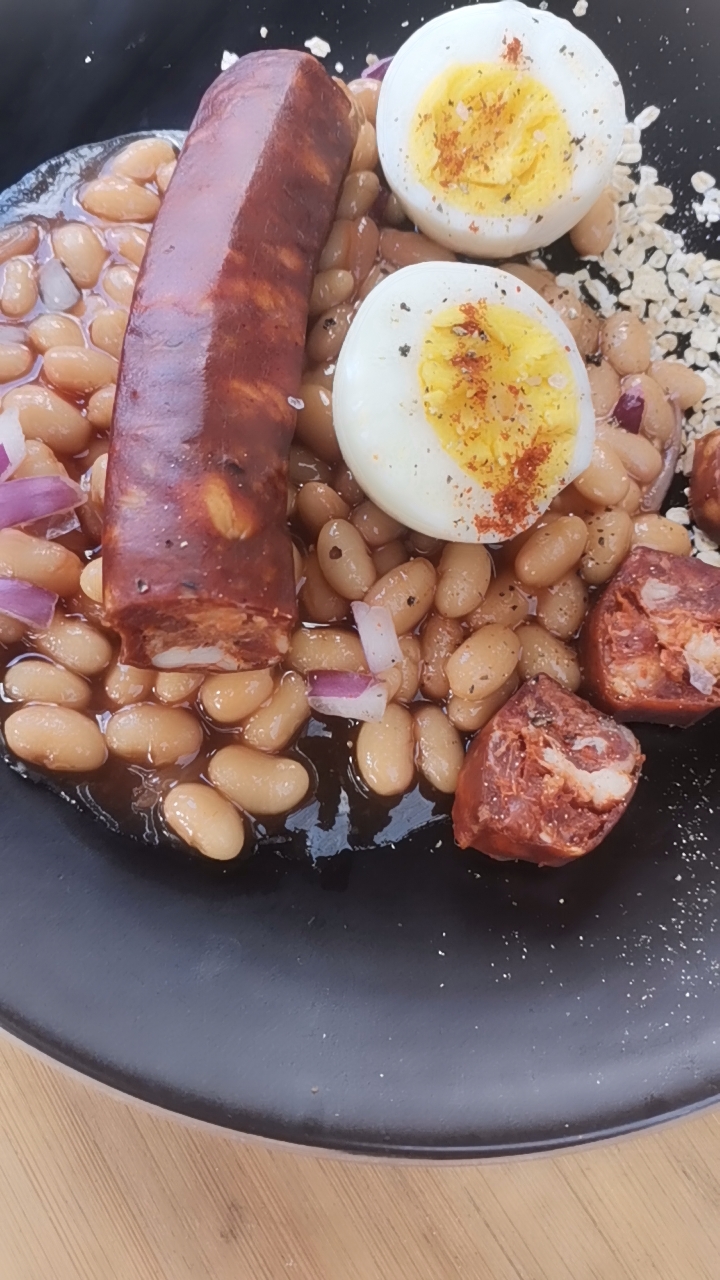 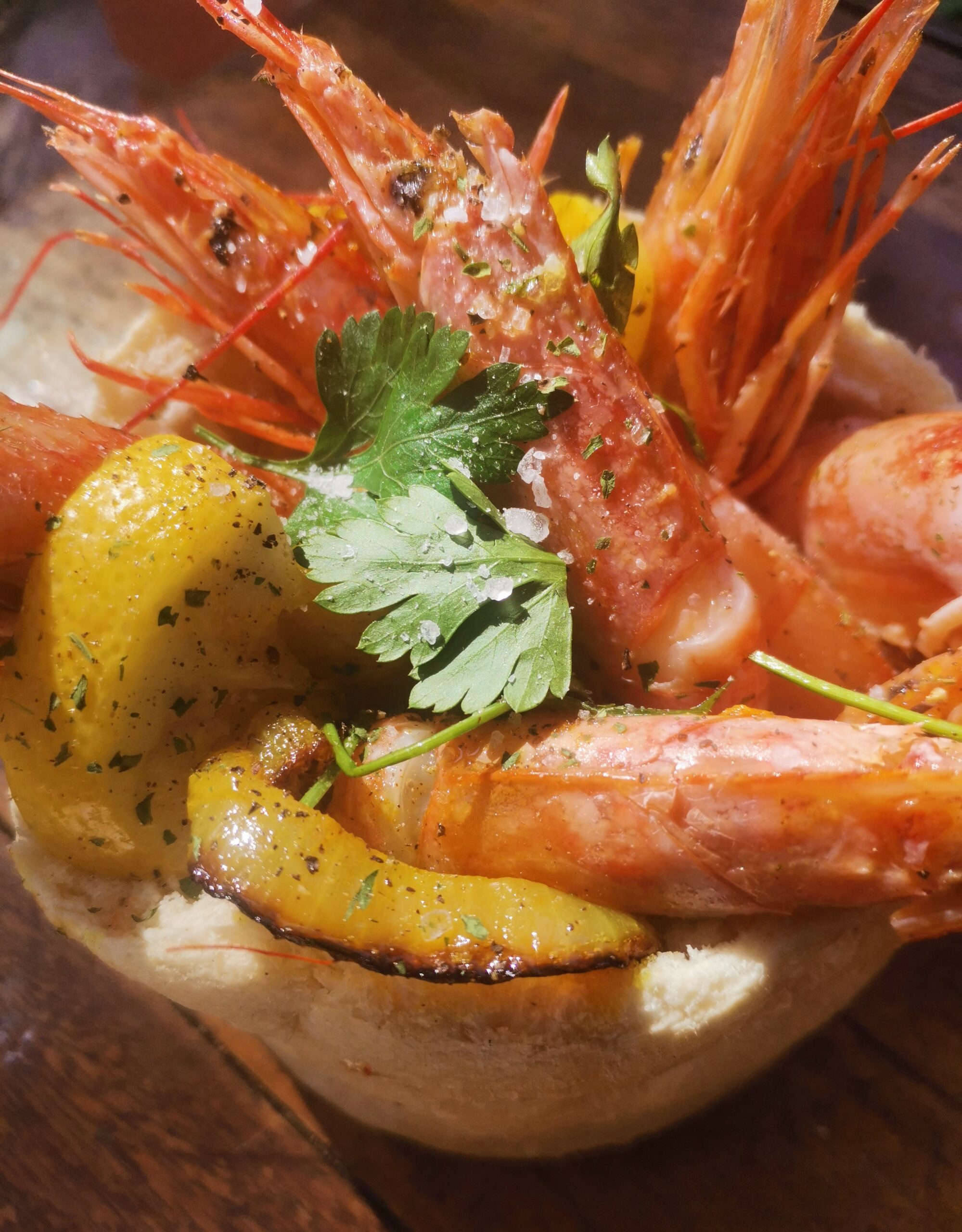 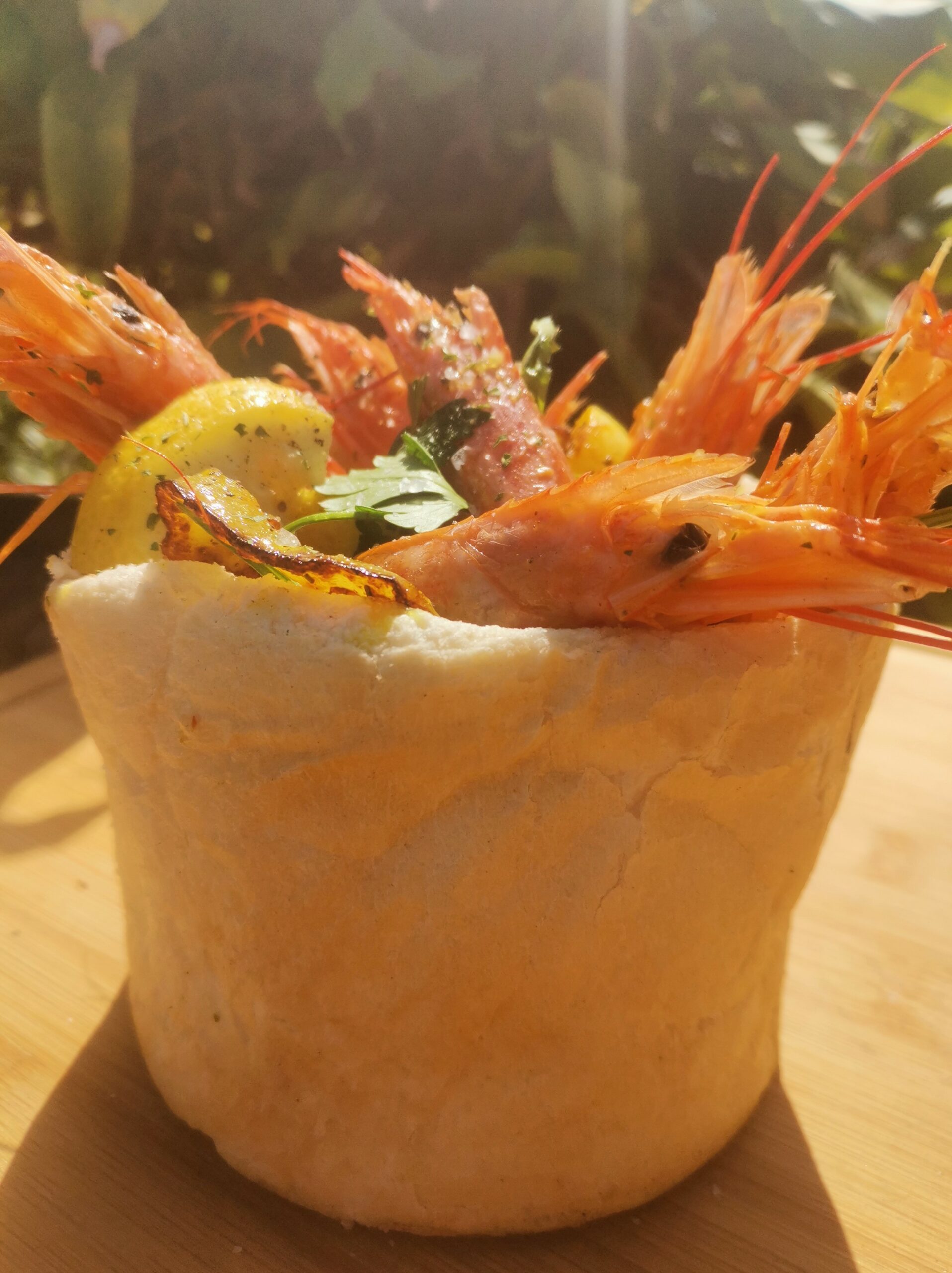 Jumbo’s are elephantine and shrimps are tiny, right? Well maybe not in food circles.

My version uses local seafood as well as a homegrown oxymoron – the bunny chow (unlikely to have any rabbit like ingredients). I prepared my king prawns and placed them in a hollowed-out quarter of a loaf of bread in true Durban style. 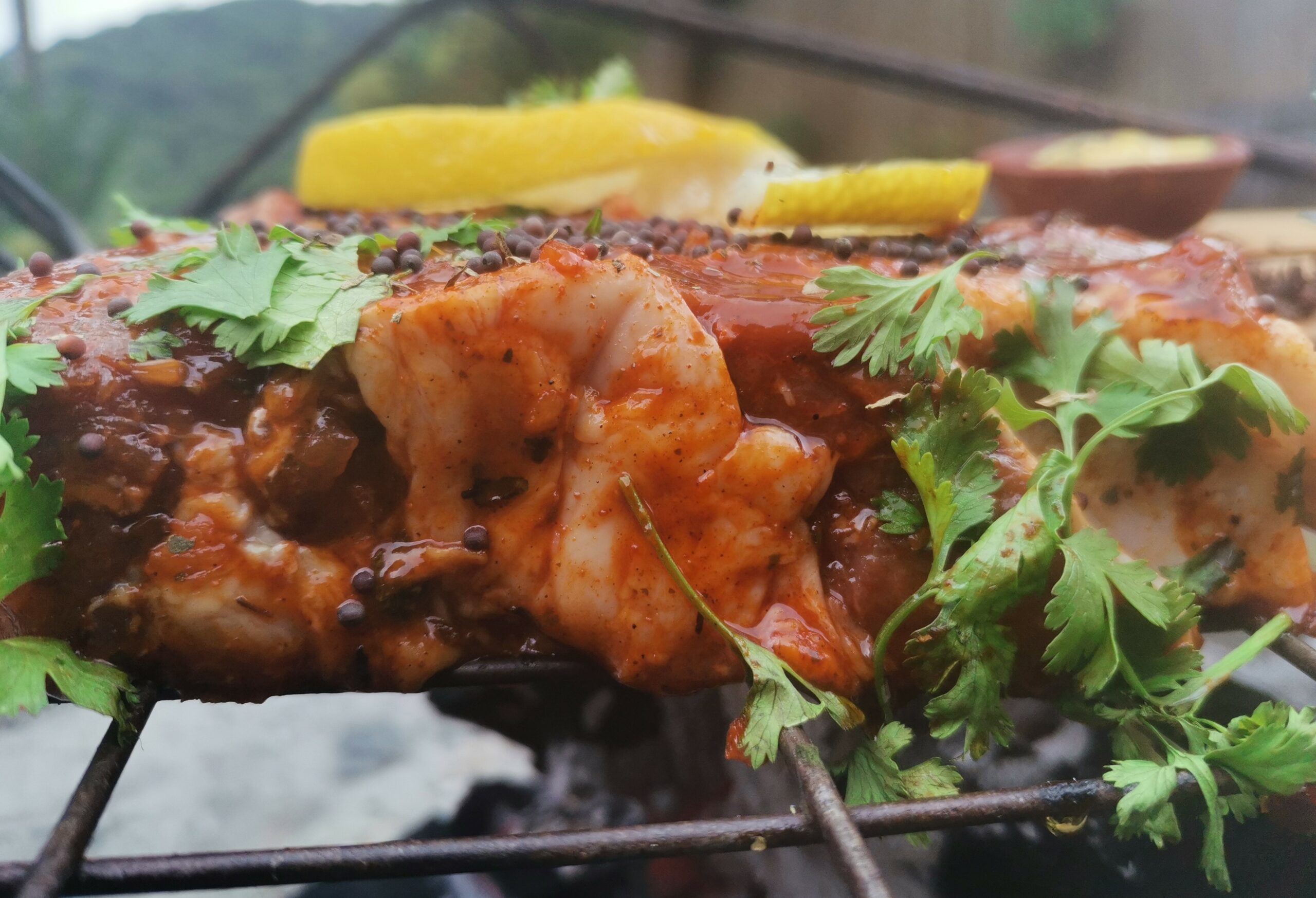 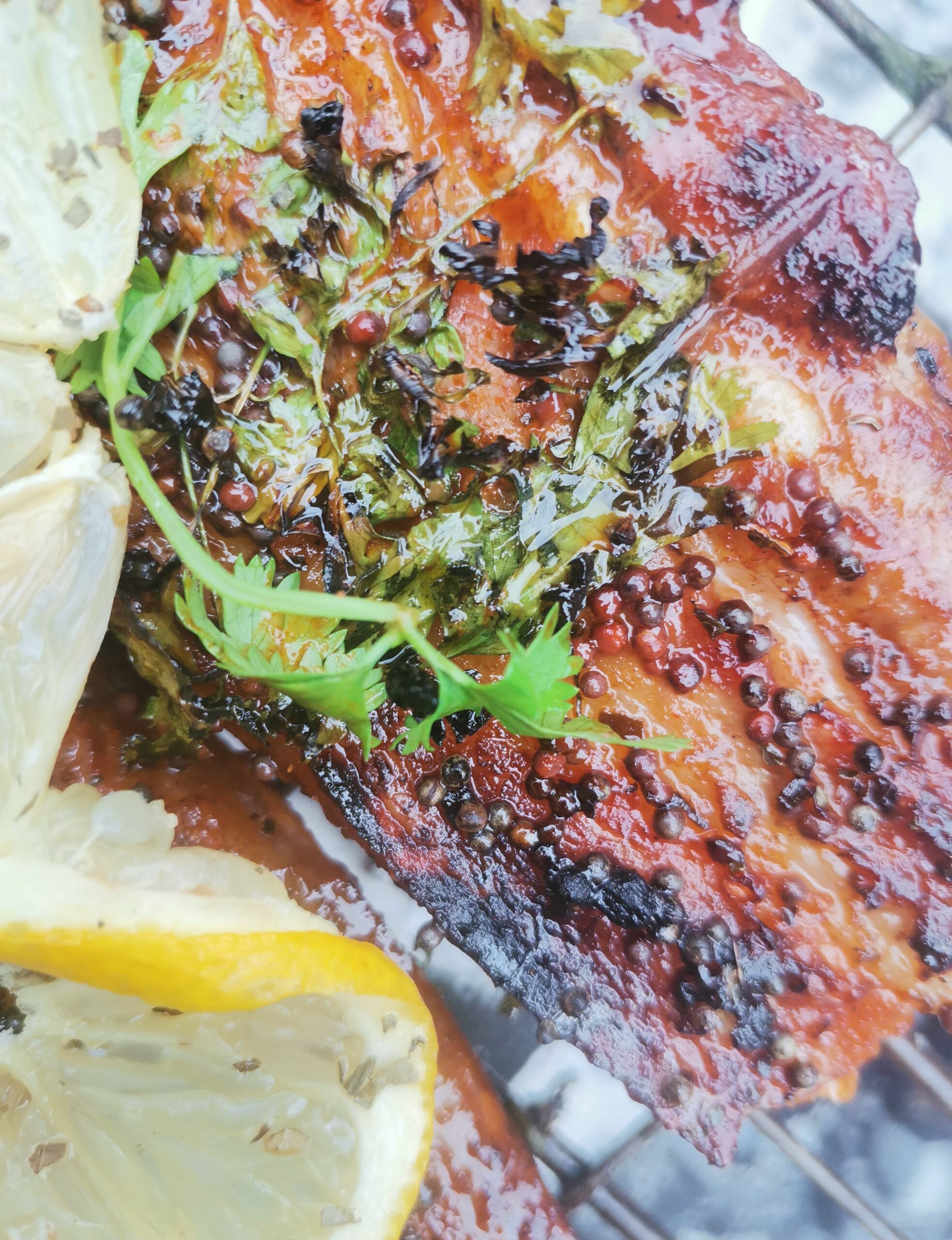 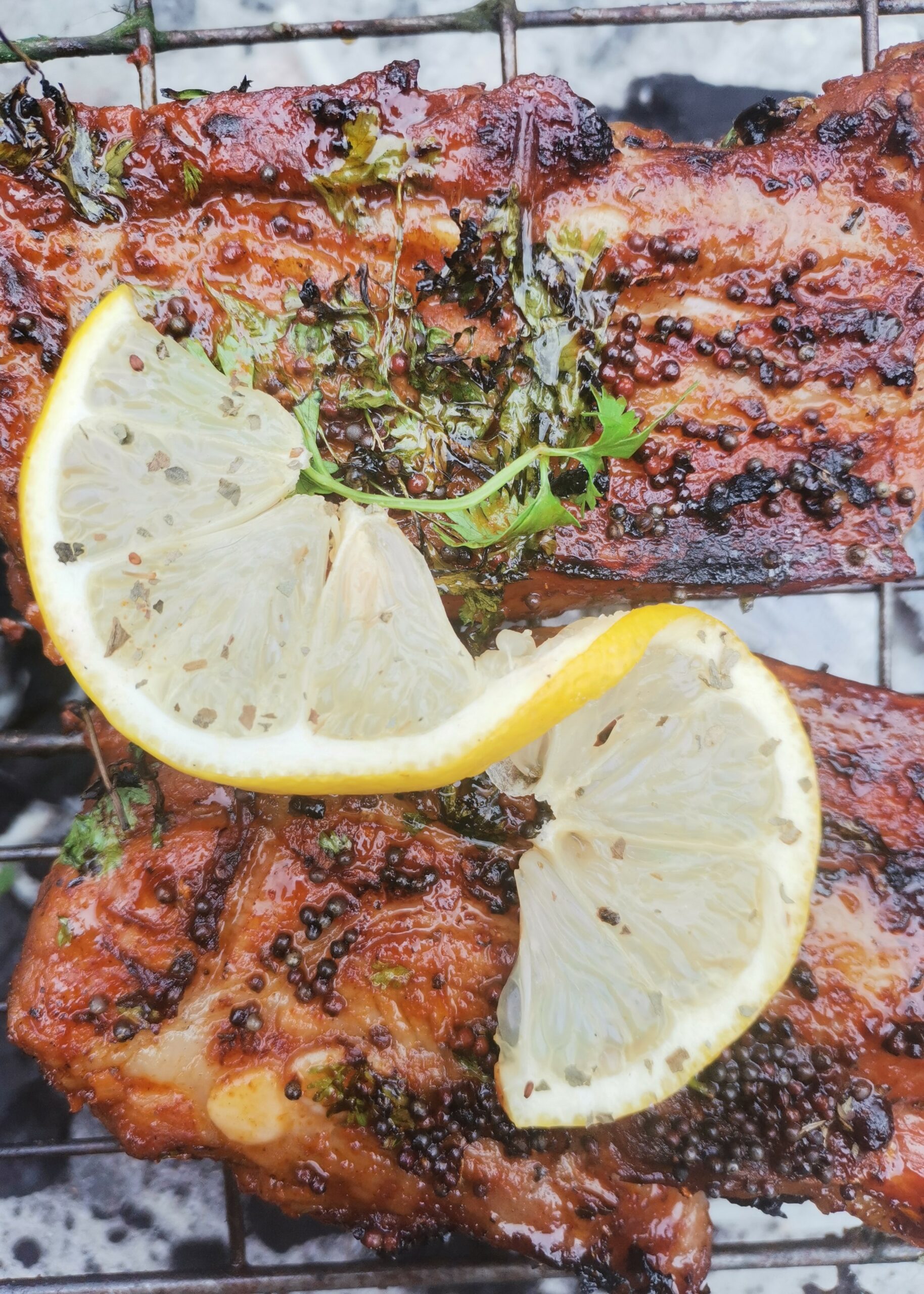 We all know about the Biblical reference when Adam gave Eve a spare rib – and I’m sure that was meat, bones and all. Having spent many an evening with sticky fingers and baskets of bones whilst enjoying a rack of ribs with friends, I confess to being a little perplexed when I came across some boneless spare ribs.

I cooked them slowly on the fire and glazed the final non-rib cage with some wildflower honey. Then I served them up with some German mustard and mustard seeds – and we had a feast fit for the garden of Eden. 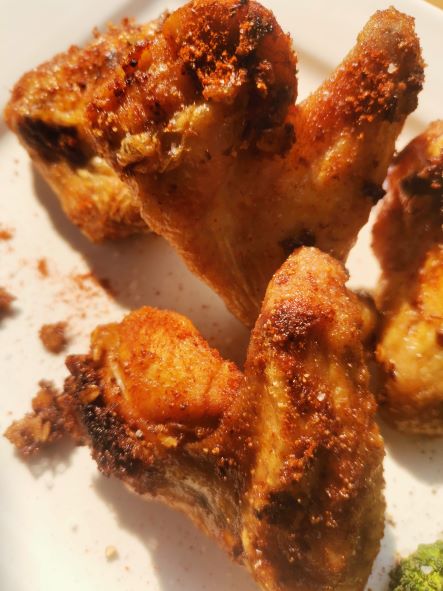 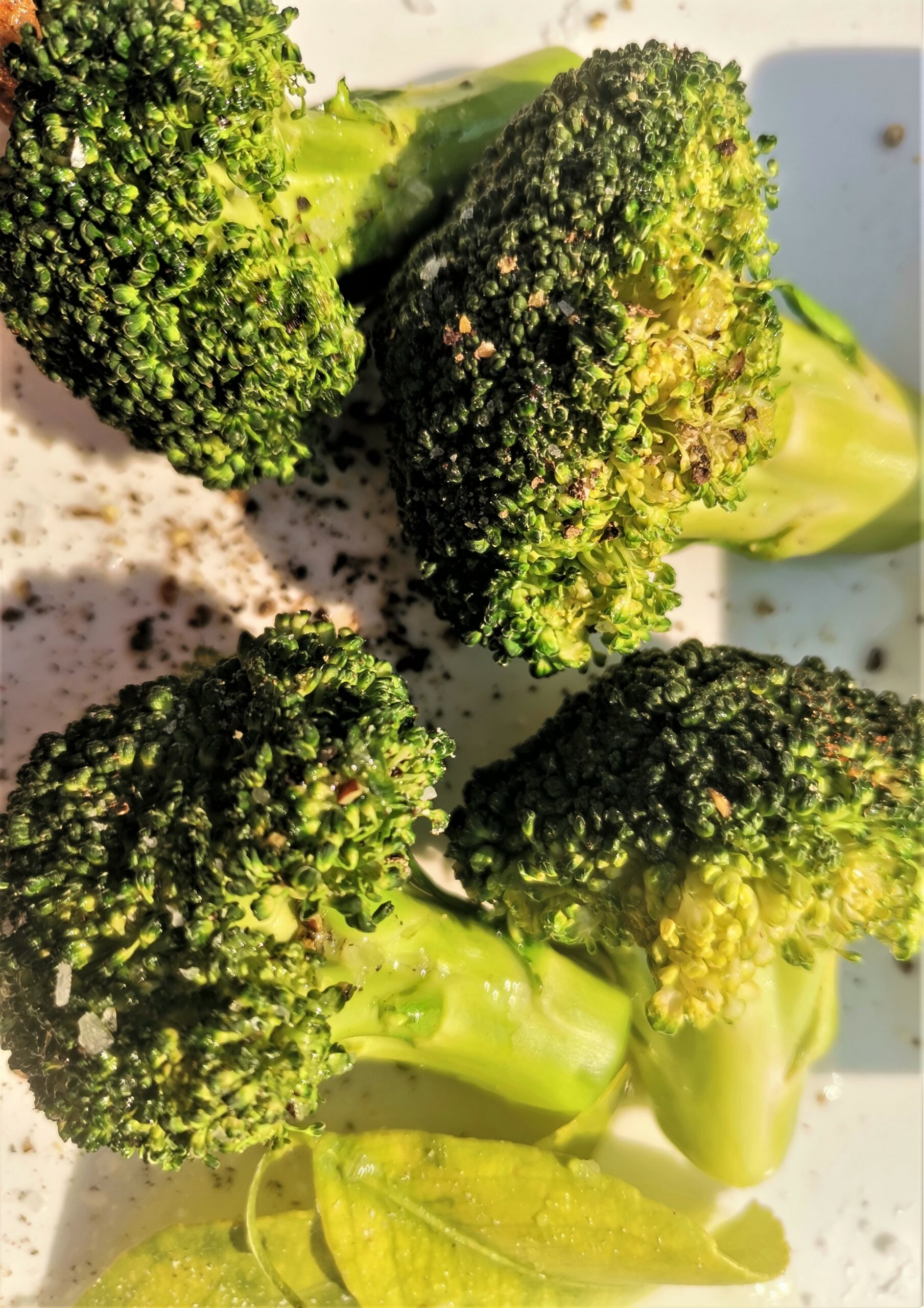 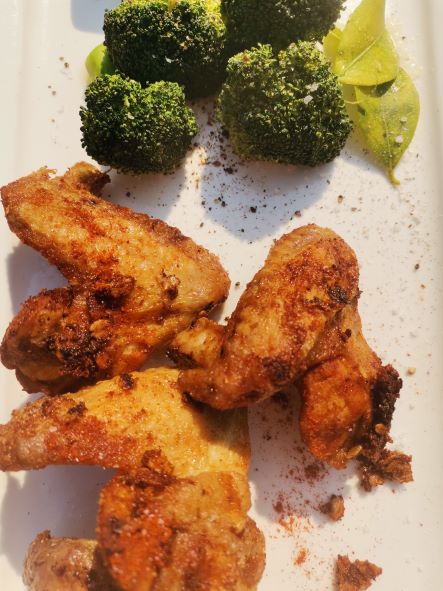 I must admit, I never put much thought into this one, until I started to contemplate the fact that buffaloes are unlikely to fly!

Seriously though, I assumed this dish was named after the winner chicken dish that had its origins in Buffalo, New York, in 1964. A tiny bar called The Anchor Bar became famous for the owner’s hot chicken wings, served to his friends as a late night snack.

This dish is served with a blue cheese dip and celery sticks. I made mine with another healthy green – some grilled broccoli.

Picture the scene… George Clooney is outside a hot dog stand in Oceans 11, set in New York City and the script says: order a plant-based hot dog… Need I say any more?

Although this scrumptious actor (according to my editor) is not strictly vegetarian, many celebs are.

When veganism, and vegetarianism, came on the scene, I even dedicated part of my cheffing career to creating a vegan and vegetarian menu at my restaurant. There was an amazingly positive response and I made a point of making sure that there was always plenty of honesty so all the foodies that graced my bistro knew exactly what they were eating and everyone’s nutritional needs were met.

Recently, there has been so much confusion when it comes to food labelling and packaging. This escalated to the levels of a sci-fi movie – is a burger, is it a nugget – no, it’s mushroom or soya! Take it off the shelf immediately.

There’s a lot more to be said about all of this in the future but, meanwhile, read our story in the Life & Style section about the launch of a campaign calling for health warnings to be included on the labels of some processed foods.  That’s food for thought, indeed.

This time round, I decided to try out Fryer’s plant based hot dogs. Much to my surprise, it contained soy bean and some ‘artificial’ herbs and spices. I added some Canola mayo to introduce some flavour – but, as a chef, I’m not all that impressed.

I’ve decided to go back to making my own vegan and vegetarian patties and sausages – but those are oxymorons for another time and place. 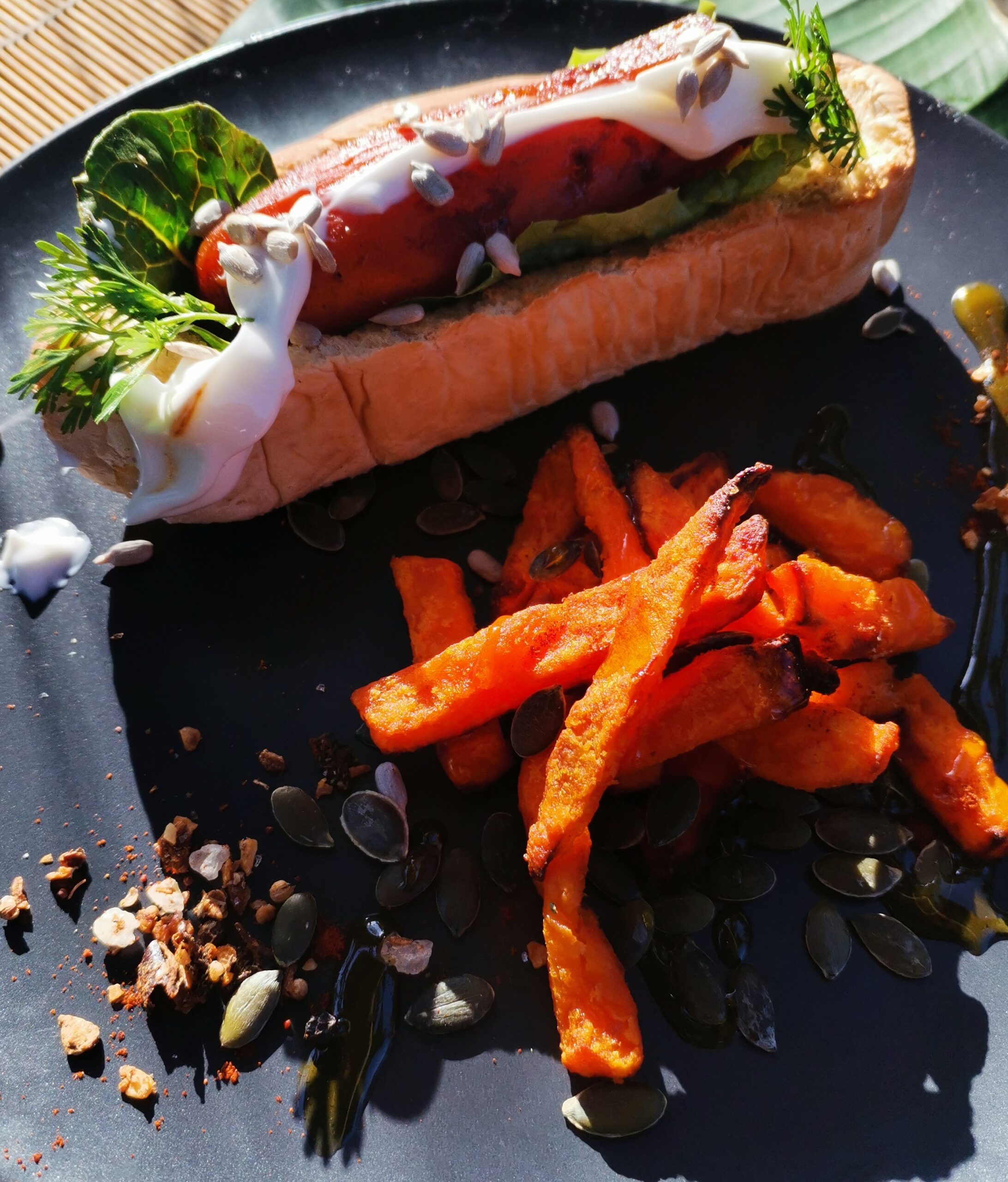 At many a braai with friends, the question is always – was the chicken drunk when he crossed the road? Many of the answers have been very creative – and most unprintable!

But that’s the joy of having friends over for a crazy luncheon where chicken jokes are the order of the day. When I first heard about it, combining chicken and a can of beer seemed like a clever idea – but there have been times when things went a bit wrong!

So, get all your chicks in a row, snap open a can of beer and take a big sip … by far my favourite oxymoron at times like these.

Look left, look right and then run across the road to your favourite supermarket or deli and pick  yourself a  fresh home grown free range chicken. If you can’t make it on foot, buckle up and drive responsibly! 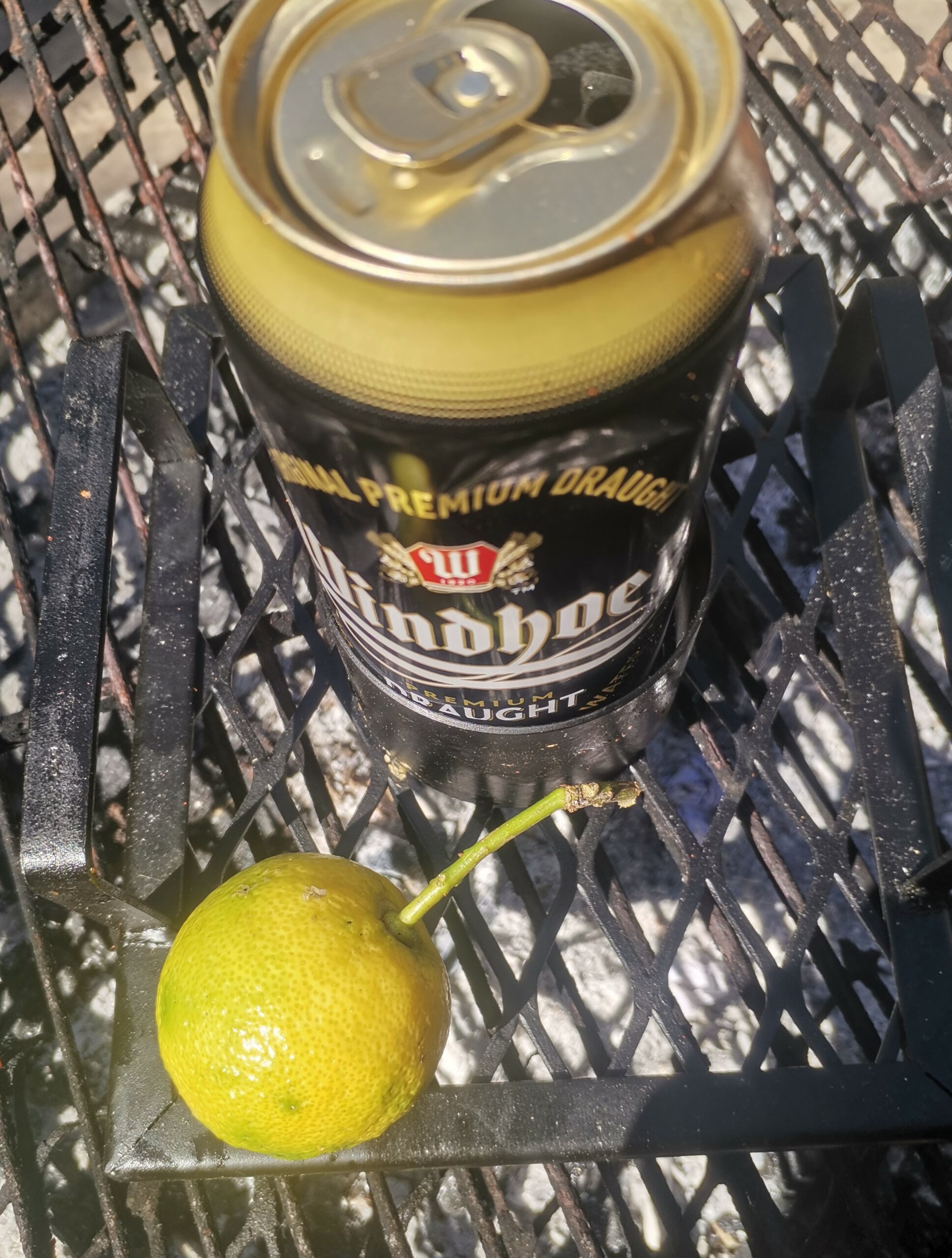 Once home and ready to start cooking, begin by basting your chicken. I use my own aromatic dry rub with fresh herbs and spices. Give your chick a good, olive oil massage and add some dried turmeric, ginger, geera, smoked paprika and thyme.

Light your briquettes in your Weber and enjoy some of the ice cold leftovers from your six pack until the coals are smouldering. Open the centre cavity of your chicken and delicately place your opened beer can on the pastor’s nose. Balance the chicken and beer 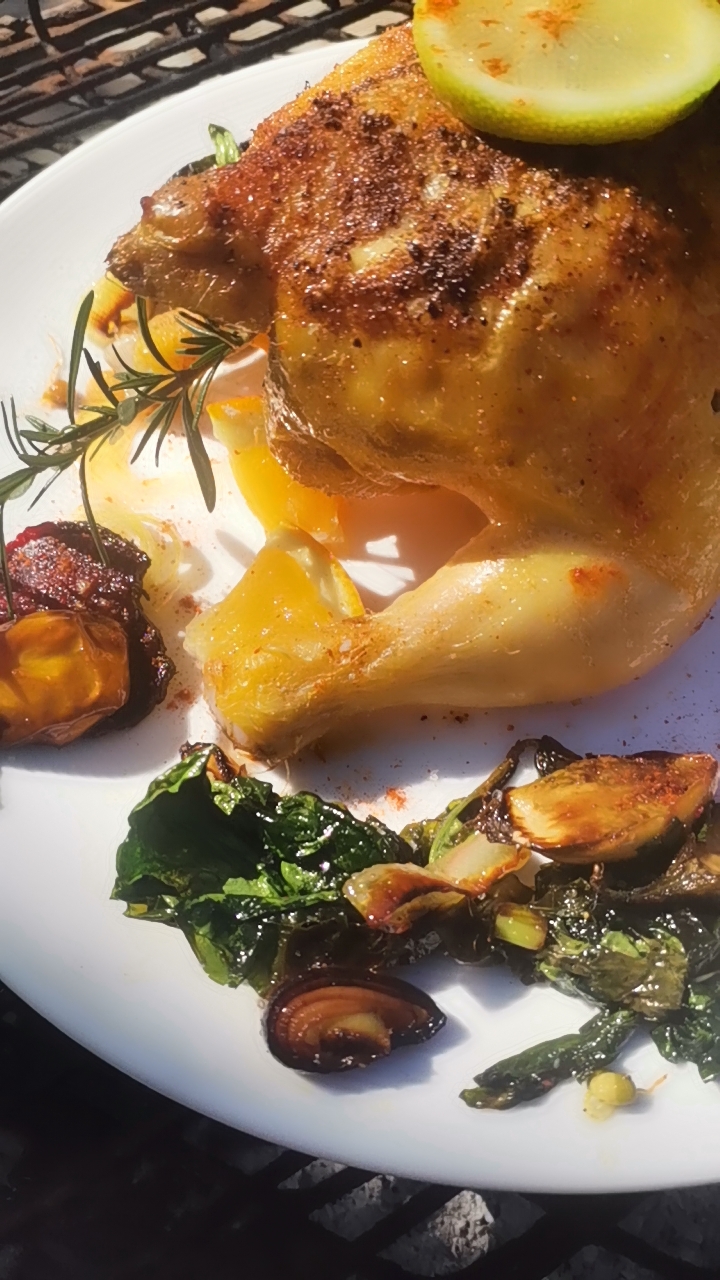 configuration on the grill, close the lid and simmer away. Slow cook the bird for 30 odd minutes.

Serve up your beer infused chicken with some fresh lemon and rosemary sprigs.

The seriously funny end to this culinary oxymoron escapade would be to serve up your meal with the ultimate mismatch – non-alcoholic wine or beer. In my book, that is probably a hangover from Covid. I’m raising my glass to gastronomic freedom and the days when wine can be wine and grape juice can be grape juice – and the only choice we have is enjoying good food and good company in equal measures. 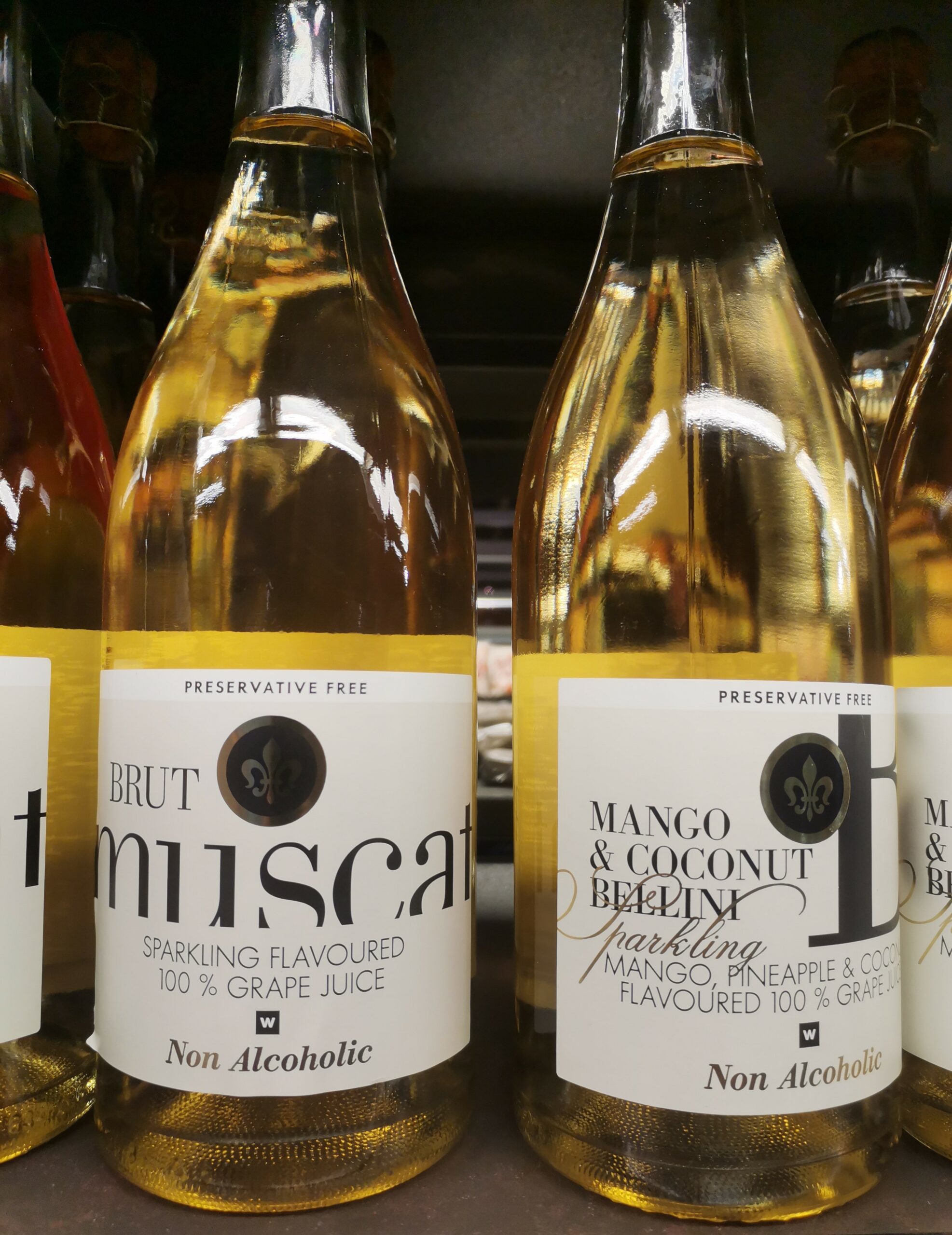