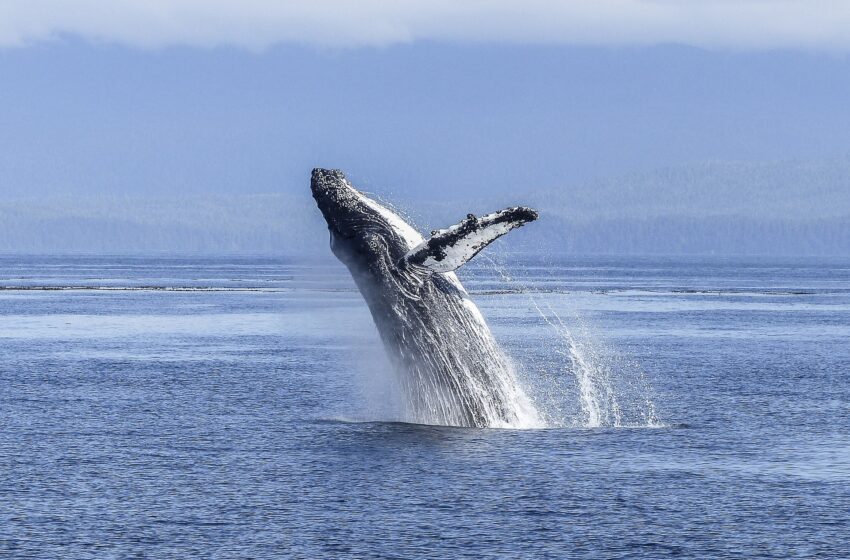 A WHALE OF A TIME ON THE KZN SOUTH COAST

Between June and November every year, visitors to the KZN South Coast are treated to an ocean spectacle as the humpback whales migrate northwards to have their calves before returning close to shore to protect their young ones. This year, the increase in the whale population has resulted in even more activity, with whale sightings an almost daily occurrence.

“Whales have been the talk of the town this season with locals and holidaymakers treated to a bumper humpback whale migration in 2022. It has been an incredible couple of months for viewing whales on the KZN South Coast, with visitors catching sight of these massive, playful animals in action, from the shore, in the sea and from the skies,” says Phelisa Mangcu, CEO of South Coast Tourism and Investment Enterprise (SCTIE).

Wayne Harrison, a marine mammal tour guide based on the KZN South Coast, said the whale numbers are increasing 10% year-on-year: “The early spring months, with those dominant winds, make the whales more boisterous which is why we’ve seen so much breaching recently. We’re likely to see more and more whale activity on the KZN South Coast in the coming years.”

While humpback whales are the most sighted during this migratory season, there has also been an increase in the number of southern right whales spotted from the various lookout points along the KZN South Coast’s 120-kilometre shoreline. Sightings of a dozen – or more – Humpback moms and calves are seen daily, with big groups coming close to shore to keep the calves safe from predators. These mammals have been spotted almost on the backline in some instances.

Humpback whales have a small dorsal fin set on top of a noticeable hump on the back and are dark on top with a white underbelly. Adults grow to about 15 metres in length and weigh between 35 to 45 tonnes. One of the most noticeable characteristics of humpback whales is their long flippers. Pectoral fins are long and narrow and reach up to 5 metres in length. Each whale’s pectoral fin has its own unique identifying markings. The underside of the tail has white markings and a unique edging that enables scientists to identify them.

They are a species of Baleen whale with an average life span of around 40 to 100 years. The gestation period for humpback whales is around 11-and-a-half months, and the mother will continue to nurse her calf for six to 10 months. Only one calf is born per mother every 1 to 3 years. 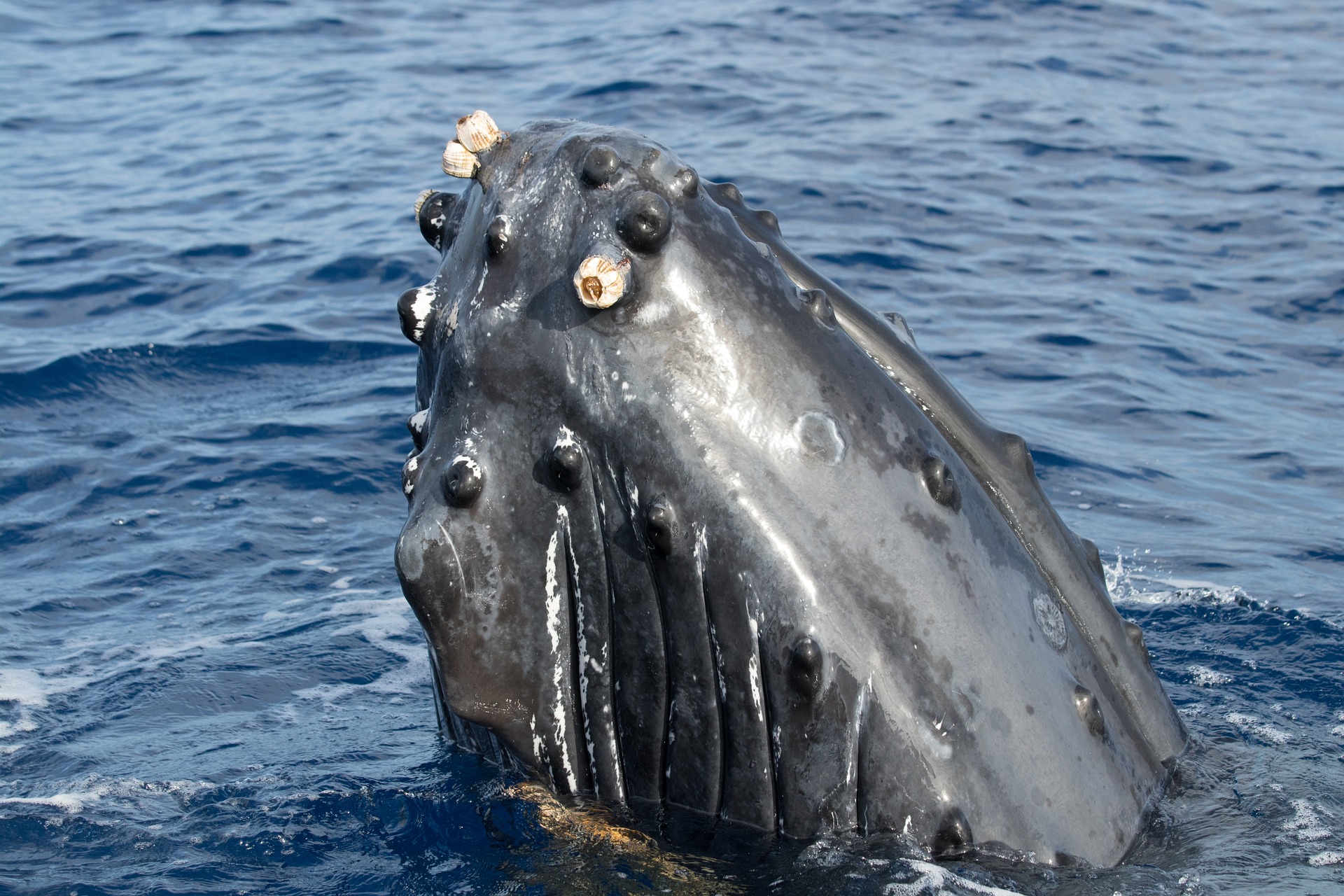 According to the World Wildlife Fund, humpback whales are extremely active, often slapping their flippers and flukes on the surface of the sea. They also breach more than any other baleen

whales. They often feed in large groups and are famous for their “song.”

Male humpbacks produce a long series of calls that are normally heard during the winter breeding season, although songs have been recorded in the summer. The whales may repeat the same song for several hours. Humpback songs appear to be shared by all singing members in the same area of the ocean. As the song changes, all members sing the new song. The same song is sung in spite of the great distance between groups in the population (up to 5 000km). Researchers are not exactly certain why humpback whales sing. They have hypothesised that the songs attract females or are used as territorial markers.

The International Whaling Commission (IWC), which was established in 1946 as the global body responsible for management of whaling and conservation and has a membership of 88 governments across the world, says that humpback whales are one of the most-watched and well-studied species of whale and is actually one of the more conspicuous targets of whale watching around the world. 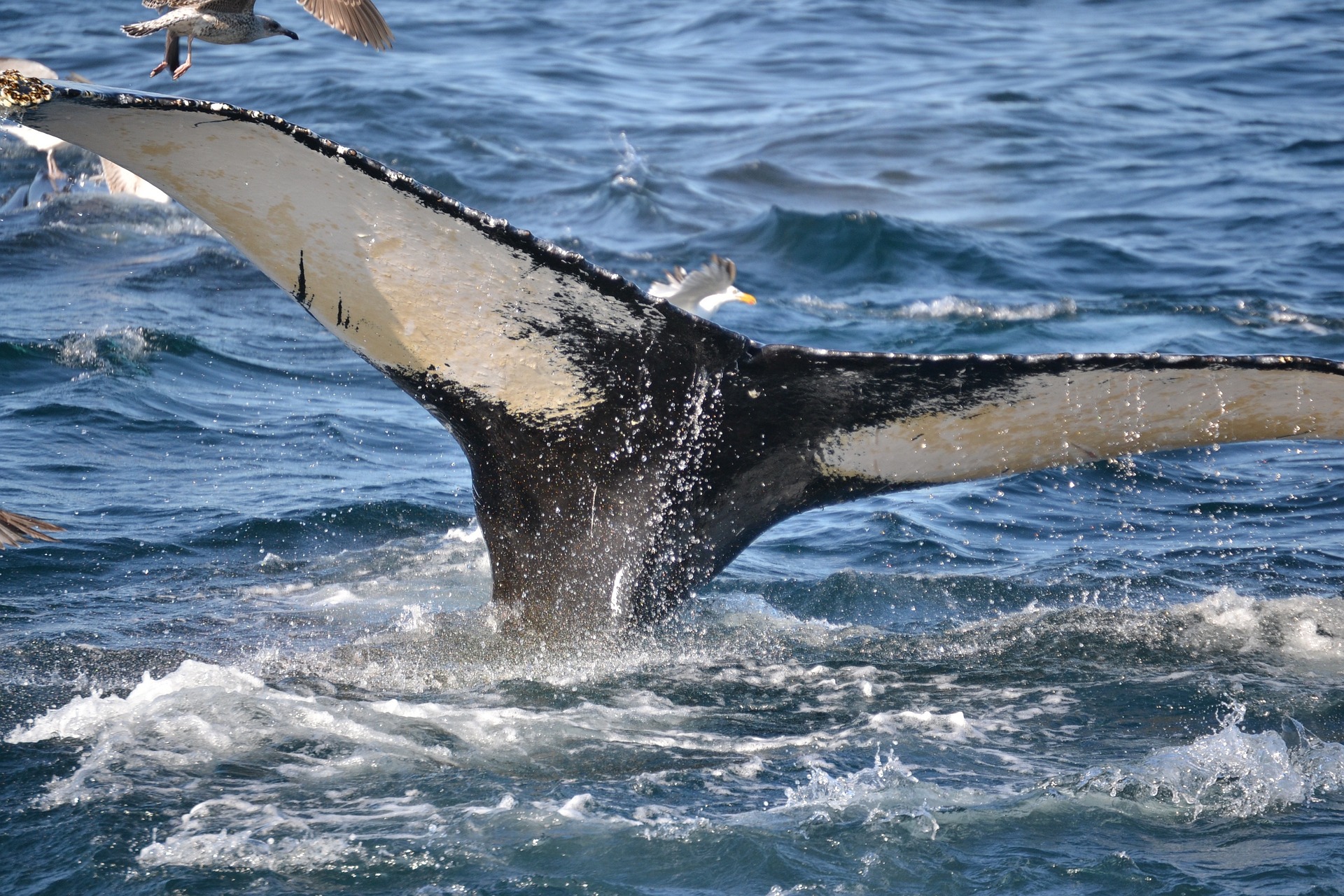 Every known population of humpback whales performs long seasonal migrations; spending summers feeding in cold productive waters at high latitudes and winters on tropical breeding grounds where they mate, calve, and nurse their young. Some individuals travel as far as 8,000km between their breeding and feeding grounds. Those living in oceans in the southern hemisphere generally around the Antarctic between November and March and migrate toward breeding grounds near the equator where they mate and give birth between July and October 1.

According to the IWC, humpback whales may be at risk from a number of threats, including entanglement in fishing gear,  ship strikes, habitat degradation, oil and gas development and climate change, but populations have recovered to the point where the species has been oved from a status of Vulnerable to Least Concern by the IUCN Redlist of Threatened Species.

Many populations of humpback whales were heavily hunted through the 1960’s when Soviet whaling operations were still catching humpback whales in the southern oceans, the Pacific and the Arabian Sea despite an IWC agreement to stop hunting this species from 1963 onwards. The halting of whaling since then has been a conservation coup with recent IWC assessment of southern hemisphere humpback whales estimated to be around 70% of the number of whales thought to be in the Southern Hemisphere before hunting began.

WHALE VIEWING ON THE SOUTH COAST

Witnessing the whale migration is a bucket-list activity and the KZN South Coast is offering front-row seats to this natural phenomenon! Visitors can enjoy this spectacle from one of the beaches or even head to one the region’s many whale decks. Examples are the Umtentweni Conservancy Whale Deck, Ramsgate Whale Deck, Impithi Beach Kiosk, and Umdoni Golf Club Whale Deck.

There are many local tour operators ready to take visitors out on boats to enjoy the experience. Scuba diving is a great way to be serenaded by the whale songs at Aliwal Shoal or Protea Banks – both Marine Protected Areas. The view is impressive from the skies with local microlight operators taking tourists on viewing trips. Alternatively, head to one of the many ocean-view restaurants or bars and relax while enjoying the show!

Get to know the whale lingo: