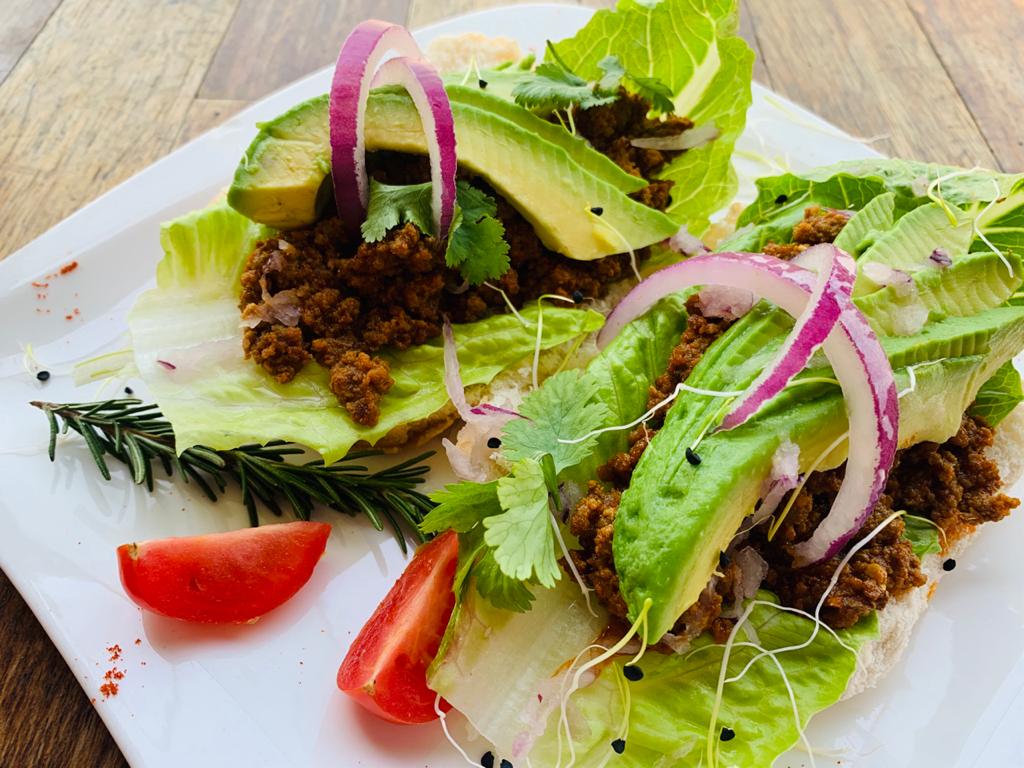 A CHEF, A RESTAURANT AND A BEAUTIFUL BOX 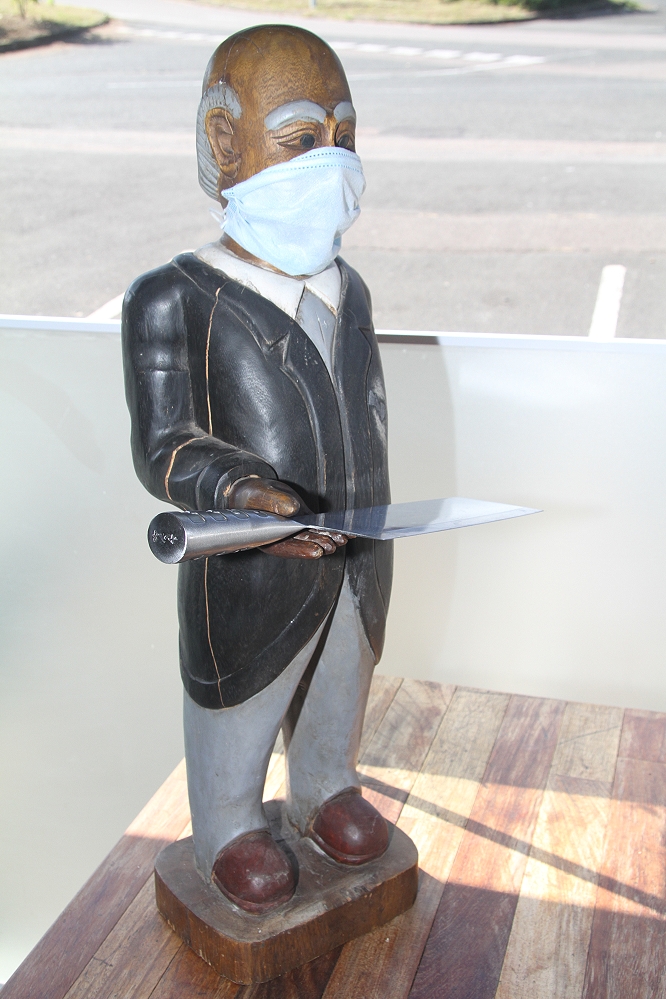 Masked and with chef’s knife in hand, Jeeves, the Salisbury Café mascot, guards the door.

This gives some inkling of the wry humour of chef and owner, Jean-Pierre (JP) le Roux. He’s probably one of the last to downplay the frustrations and tribulations as the restaurant sector fights to survive the Covid-19 pandemic, but also one of the first to suggest some proactive action as the perfect anecdote to hopelessness.

As lockdown regulations began to ease a little, JP traded in his spoons and knives for paintbrushes and rollers and headed to his beloved restaurant to give it a makeover. In the process, he may have painted over a few rough spots, but he has kept its unique suburban flavour and has big plans.

Back to the beginning

A year to the day since he bought Salisbury Café, JP perched an old style blackboard outside in the parking lot declaring that the café and bistro was finally open again.

Although he remains skeptical about the extent to which cash-strapped and fearful customers who cannot add a glass of vino to their orders will return, he is determined to spot the opportunities rather than the pitfalls.

When 2020 made its brave debut, he believed that flavour was king and food belonged on a traditional china plate. He might even have been skeptical about the Apps that are currently transforming the sector.

Fast forward a few months and JP is confidently embracing everything that technology can dish up at his Westville eatery.

Now, you can download an App on your phone that allows you to find the menu, scroll through, order and pay without so much as going to the till. You order heads directly to the kitchen. Another App lets you download your coffee order when you leave home and then roll down your window to collect your favourite steaming brew when you pull up outside Salisbury Café. 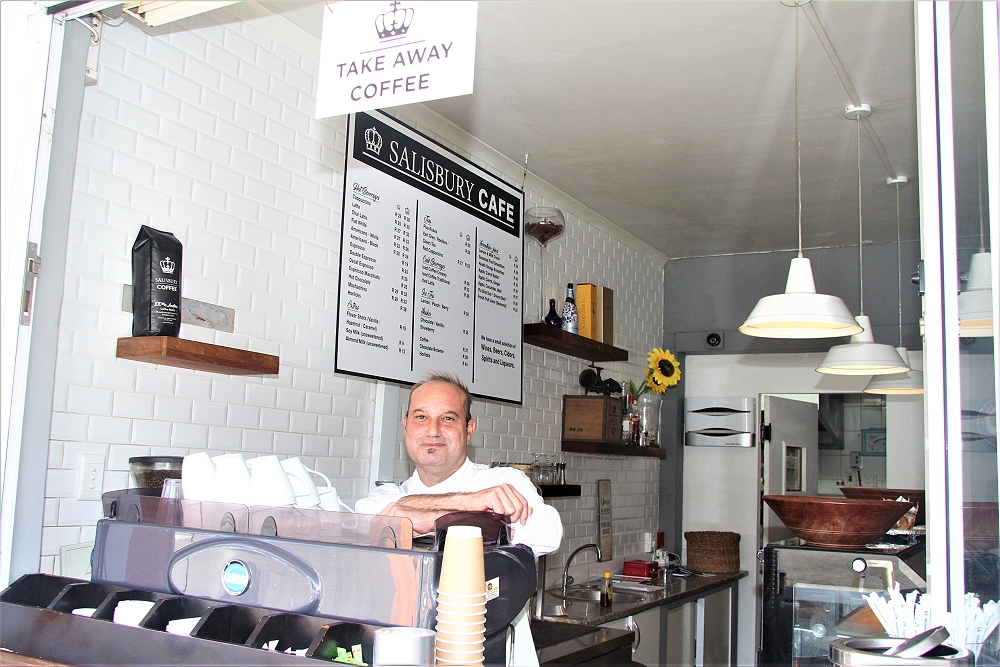 A new take on take out

As a chef, JP is looking forward to things returning to normal and, like many chefs he has spoken to, never wants to see another cardboard box again. In fact, he promises to happily have a take-out box bonfire to celebrate.

Proud that his food is well plated, he says it is simply not the same to place a meal in cardboard. The disruption of delivery or the cool down during collection means that the meal that arrives on a home kitchen counter top is nothing like what customers expect.

But the odds are stacked against chefs like JP right now.

“People come here because of my reputation as a chef and for the food. If you can’t showcase your food on that level, you have to start thinking a bit out of the universal box. I know that’s a bit of a cliché but it has a whole new meaning for restaurant owners now. This has given us an opportunity to manipulate and design our meals so that they can travel and still look good when they arrive. This is a different dynamic,” he points out.

On a mission to improve take out presentation, he says he is in discussions with a packaging company to produce something that is closer to a plate but ticks those ever-present boxes of being biodegradable, retaining heat and ensuring that the end result closely resembles what was initially delivered to a restaurant table.

“I love playing with food, with ideas, colours, taste. When people open what is for the meantime still a box, it must be a surprise.  They must be able to say, ‘Wow, this is what I expected!’ For too long, people have complained that there’s a difference between the pictures on the menu and the meal that arrives. So, that’s what I’ve been working on – taking that plate of food and making it even more perfect so that, even though it goes to your home, you feel like you are in a restaurant.”

The entrepreneur in JP has also recognized that the Covid-19 pandemic could have inadvertently created a whole new category of food. 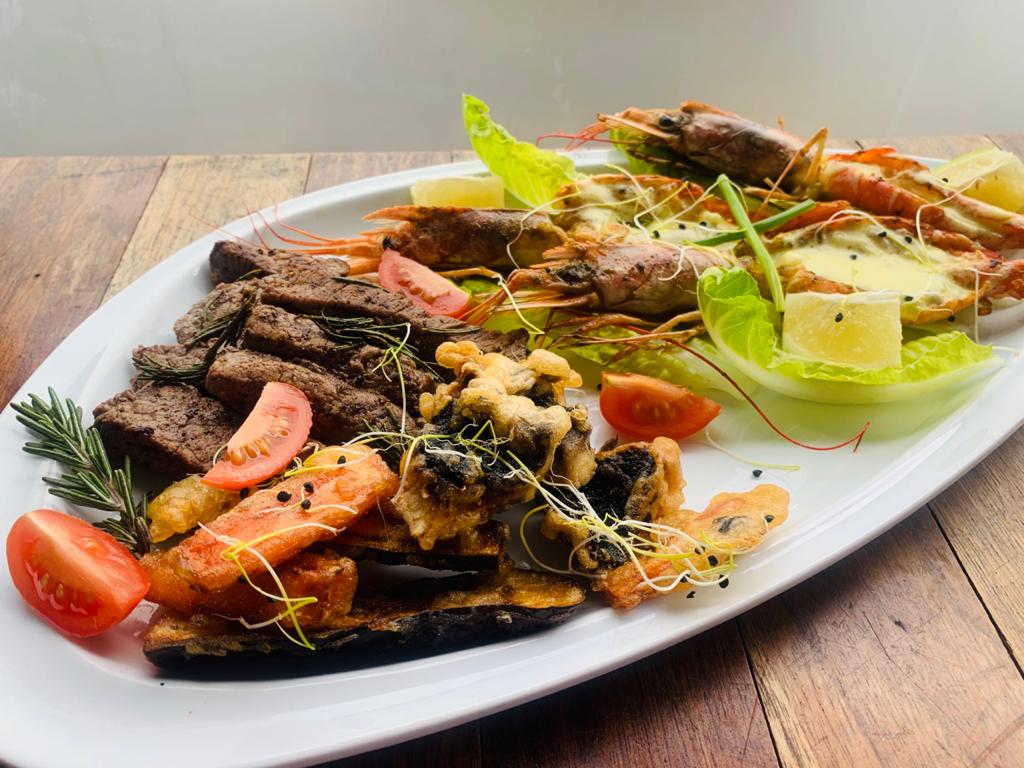 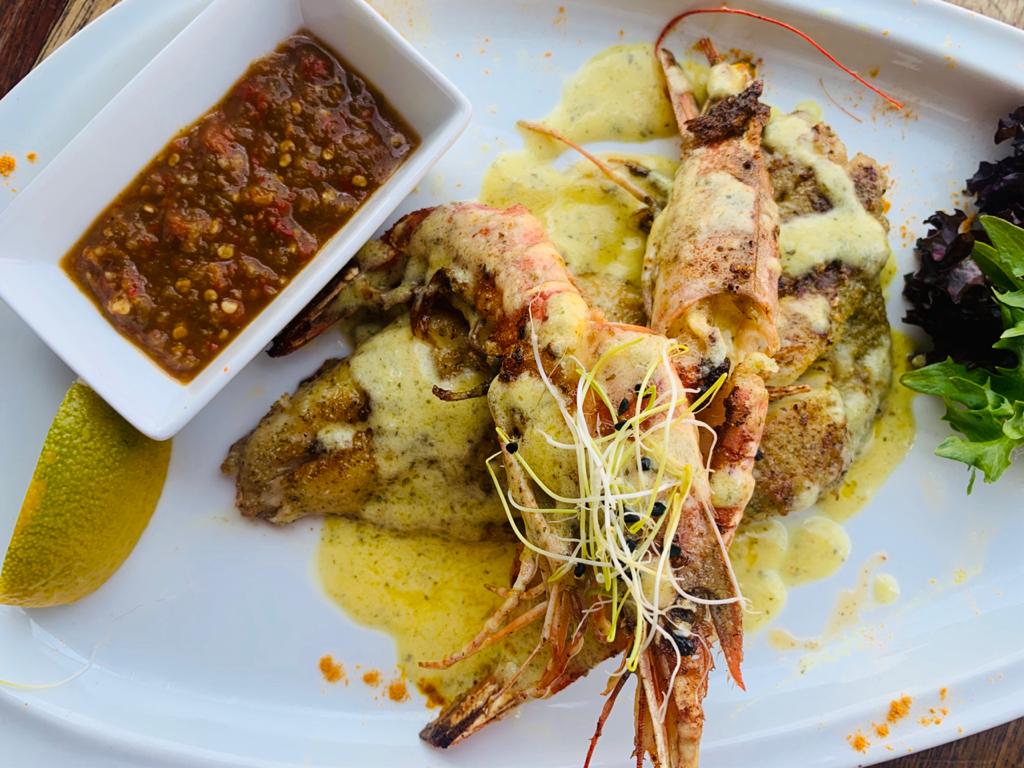 Whereas take-out meals have been the domain of franchised brands that turn out processed food ordered off highly standardized menus, Covid-19 could well have taken independent eateries into a domain they would not have considered before. It may also have created a new customer who would not venture through a KFC drive through but would certainly order in a quality meal from a restaurant with a good reputation.

This will be a restaurant that will dispatch a meal with all the right garnishes and sauces and not have his customer rummaging around in his refrigerator for that long forgotten and possibly expired bottle of tomato sauce, suggests a smiling JP.

Wearing both chef and entrepreneur hats, he says this also opens doors for those flexible enough to serve important and evolving niches such as vegan food.

He introduced his new vegan menu just before lockdown and is now in the throes of relaunching a slightly revised version. During the short space he was able to test his new creations before every one retreated behind closed doors, his vegan burger had already become a signature dish.

“This is not just a regular burger without meat. I’ve spent time designing this burger. What would have been the bun is now an avo at the top and grilled tofu below with aubergine and beetroot. A lot of restaurants take short cuts and still use egg as a binding agent. I’m proud to say I will not take a short cut even if it goes out in a box,” he says.

The recipe for a new normal

Despite his current preoccupation with all things take out, JP is confident that people will return to restaurants simply because they appreciate the overall experience.

It is this very restaurant experience that drew him into the sector in the first place. JP completed his chef schooling in Cape Town and then worked at the Ambassador Hotel and a number of top restaurants in the Western Cape before finding he was a little bored in the kitchen.

He switched to TV production.

His small production company grew to the point where he had two partners and had landed the Tiger Brands Unite Against Hunger account. That took him back into the world of cheffing where he met Masterchef and food industry icon, Dr Bill Gallagher, who took him under his wing and became his mentor. Together, they travelled abroad, cooking in the likes of Dublin.

But the adrenaline rush came to an end along with the Tiger Brands Unite Against Hunger campaign and JP switched to another big project – writing a cookbook containing recipes from 100 top chefs worldwide. However, just two years into compiling and designing it, he ran out of funding.

Disappointed and at a loose end, JP took a sabbatical. “I guess that, sometimes, one can be unsure about where you are going in life and what you want to do. Because I love people, I thought, why not find a way to communicate my interest in people through my food? I travelled for about a year to a few countries and tried to pick up nuances from different places.”

During this time, he cooked with the likes of Ainsley Harriot and George Compalis of MasterChef fame.

On his return to South Africa, he discovered that the Salisbury Café was up for sale. He bought it and, within just six months, had added his own stamp and completely redesigned the menu drawing from his international food travels.

The end result has been an eclectic and accessible menu for those flitting in and out during the daytime and entertaining themed evenings during which he can prepare signature dishes from different countries.

“Because I’m creative and flexible, I can design something and make it work. I have the best of both worlds – a set menu during day and creativity in the evening. I also wait until the last minute to let people know what theme they can expect. That has created some anticipation and had people wondering ‘what’s JP going to do next? I guess art is the mystery of selective silence and I really want to get that back again!” he smiles.

Not sure how the lockdown will unravel, JP, is nevertheless confident that he’ll land on his feet when all is said and done. As both chef and owner, he is nimble enough to respond to whatever comes his way.

“This has been a huge year during which we’ve gone from hero to zero. I guess I’m back where I was when I started at Salisbury Café. When you begin with something fresh, everyone is excited about it. Even though we’ve had hardships with the economy and then lockdown and a lot has happened, I still feel like I’ve just bought the Salisbury Café.”

“If you look at any fiscal year, you go through phases. There’s four seasons in a year. Now, our seasons have come full circle to where I am feeling the fun again. It’s a beautiful day and I’m ready to go.”

JP even believes he has benefitted from lockdown. “Everyone is healing. But it did create so much energy. I’m taking advantage of technology and starting to understand people’s tastes. When it comes to take out, people initially went for pizzas and burgers. But, after a while, they get bored. So, right now, I’m creating beautiful boxes. I’ll put my signature dishes in them until we get back to normal – and I’m looking forward to that with utter joy in my heart.”