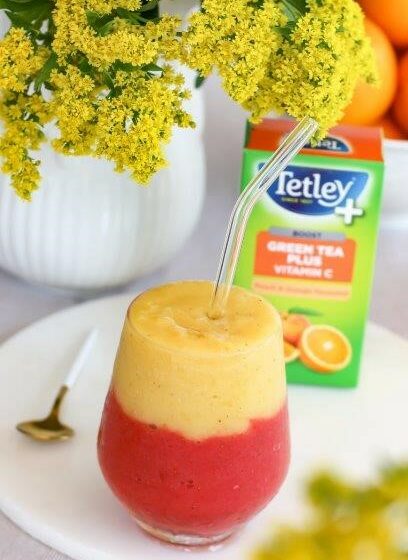 TURN OVER A TEA LEAF!

As the New Year rolls in, many see this as an opportunity to turn over a new leaf and make some positive changes. This usually involves setting some pretty substantial New Year’s resolutions.  However, as the stress of day-to-day life sets in, these resolutions normally fall by the wayside leaving behind feelings of guilt and failure.

“New Year’s resolutions are really just an expression of dissatisfaction with our current state of being,” noted Tetley Marketing Manager, Candice Sessions. “The first step to creating new, healthier habits is to accept your current position, and accept that big changes start with small steps. Tetley Green tea’s focus is on empowering South African women and men to care for themselves from the inside out, and that starts with small, healthy changes.”

There’s no need to start running marathons, but exercise is an important part of a healthy lifestyle. This can be as simple as opting to take the stairs instead of the lift, or joining a neighbourhood walking group. This is also a great opportunity to socialise with friends, making it good for body and soul!

Aim to get at least seven hours of sleep a day to improve one’s mood, appearance, and health! There has been lots of research done on sleep, and insufficient sleep has been linked to several health problems, from Type 2 diabetes to cancer.

A simple trick to avoid eating too much in one sitting is to drink a glass of water or Tetley Green Tea before each meal. Other ways to decrease overeating include using a smaller plate to avoid taking too much food, and waiting at least 10 minutes after eating. This gives the stomach time to tell the brain that there is sufficient food – no seconds needed!

It’s important to get into the habit of staying hydrated, rather than just drinking water when it’s hot, as the body requires around 2 litres a day. This means keeping a bottle of water or a homemade Tetley Green iced tea or smoothie close at hand throughout the day. Visit www.joekels.co.za for some great recipes!

Just a single cup of Tetley Green Tea can make a massive difference to one’s well-being, as it comes with an amazing number of health benefits. In fact, one cup has at least double the number of antioxidants than an apple. These are the damage-fighting elements that clean out the system!

Too much time on devices and catching up on social media can be harmful for mental health. Ditch the phone or tablet and relax in a bubble bath, or read a good book. Let the mind wander and take a break from comparisons with curated and filtered feeds!

* Steep the Tetley Green tea in a cup of boiling water and set it aside to cool.

* Add 1 frozen banana (sliced), 1 teaspoon of beetroot powder and 1 cup of frozen Strawberries into a high-power blender. Add half a cup of Tetley Boost Green tea into the blender and process until it’s a smooth thick puree.

* Pour the smoothie evenly into 2 glasses until it’s half full, then place in the fridge.

* Combine the leftover Tetley Boost Green Tea, frozen banana, pineapple and grated ginger in the blender and blend until smooth.

* Remove the glasses from the fridge and pour the pineapple layer on top.

* Garnish as desired and enjoy!

Visit www.joekels.co.za and @TetleyTeaSA for more health tips as well as healthy recipes and ideas for the whole family.