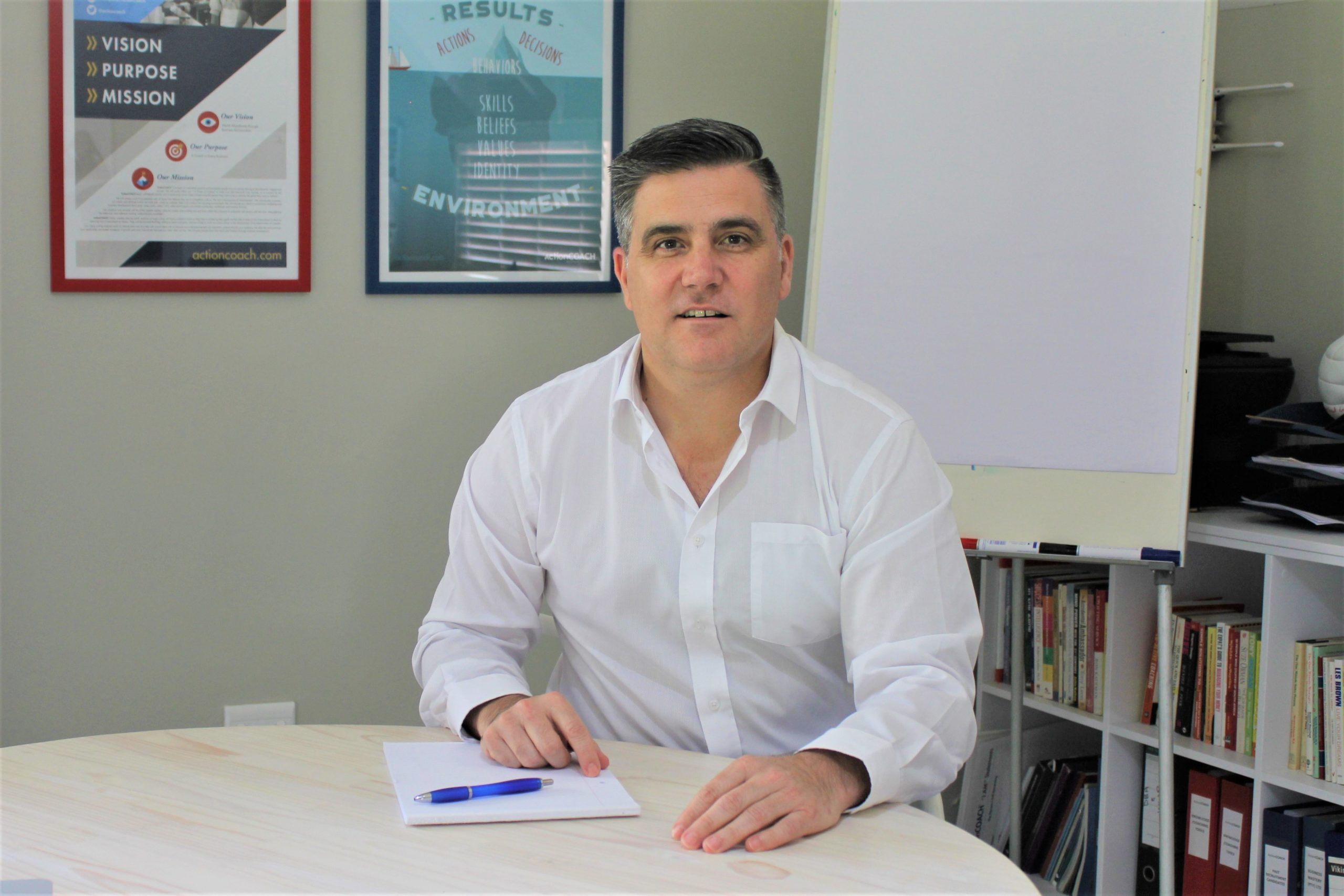 REACHING OUT TO ENTREPRENEURS

Out & About met up with business coach, Trevor Clark

Less than 10% of South African business owners engage a business coach which is arguably one of the reasons that, even during normal times, there’s such a high failure rate amongst start-up businesses, according to ActionCOACH Business Coaching’s Trevor Clark.

He believes that Covid has proven to be a huge magnifying glass, exposing basic business flaws. Now, an investment in business coaching even during a time when cash is tight could be the lifebelt that saves a business.

Under extreme stress and facing a catalogue of challenges, many business owners are either paralysed by fear or in denial. Now that push has come to shove, Trevor believes that many South African business owners may either be talking to the wrong people or simply suffering in silence.

This country has been through a lot – five years of pain, bad news and corruption. People’s trust is low as well – but we have survived.”

To calm the storm and avoid becoming a statistic, he believes that its time for businesses to return to fundamentals that were often brushed under the carpet during better times.

“In reality, most business owners out there don’t know how to run a business. Imagine going to a dealership to buy a car, being given the key, but without anyone check whether or not you have a driver’s license. All the time, new businesses are opened and existing businesses bought/sold without anyone checking that the owner/buyer has the necessary skills, training or experience that will allow that business to flourish,” he says.

Covid, he continues, has put flaws under a microscope, often exposing existing inadequacies sooner. Ultimately, they would have emerged anyway.

One month into lockdown, a number of big name companies were already retrenching. A lot of them used lockdown as an opportunity to cull underperforming staff while others were barely hanging on already. With the fundamentals of business in place – having a sound balance sheet and cash reserves – you are far better geared to weather any storm.”

SMALL BUSINESSES ON THE EDGE

Although it’s feasible to argue that no-one could have ever foreseen the Covid storm, the fact that most businesses have been teetering on the edge of failure long before the arrival of the Corona virus takes one back to the shocking failure rate of new businesses.

Although it is hard to pinpoint from where this figure originates, it is generally believed that around 50% of all businesses don’t survive their first two years and only about 10 percent survive 10 years.

The official ‘global’ statistic from the American Bureau of Labour is not that much better and suggests that 20 percent of businesses fail within their first year.  By the end of their second year, this has risen to 30 percent and, by the end of 10 years, the failure rate has reached 70%.

The figures that are bandied about are pre-Covid.

To put this in perspective, Trevor explains: “If you have a database of 1 000 businesses, that means that every 10 years, your database is empty. Over the past year, we have been on the phone quite a lot reaching out and helping as many people as we could. We often get in touch with people (who had previously indicated an interest in coaching) only to hear they have closed down. We’ve seen it first-hand. People are holding on by a thread. Covid has put normal businesses under a microscope.”

Those who have been hardest hit are small and medium-sized businesses who were touted as the saviours of an already struggling local economy and ever rising unemployment.

Trevor believes that those businesses that survive the pandemic will be better equipped to face future storms.

His message? Use your time well to equip yourself to do better.

“Even though this has been arguably the worst the world has experienced in at least a 100 years, the one thing that we can be sure of is that there will be another melt down in a couple of years. If not a virus, then it might be a global economic collapse, a war, who knows?”

He tells how one of his clients has used her downtime to do a number of courses offered by ActionCOACH to upskill herself so that when borders open she will be ahead of competitors in the travel sector who are lying low and licking their wounds.

“She’s doing one of my one-year education programmes. Tongue-in-cheek, our clients call this an ‘Entrepreneurial Mini MBA’. It’s a street wise, group business coaching curriculum that teaches you stuff you can learn now and implement as you go – essentially using your own business as the case study,” he says.

That doesn’t demote Trevor to a pessimist or doom and gloom theorist. As his own story suggests, he’s a wily businessman who can harness the business fundamentals to firmly grasp that next business opportunity.

He describes himself as a Durban boy who moved to Johannesburg during his teens and then finished his schooling in Europe when his father was seconded there. His early working life included everything from construction to a cleaning job working on the Orient Express. 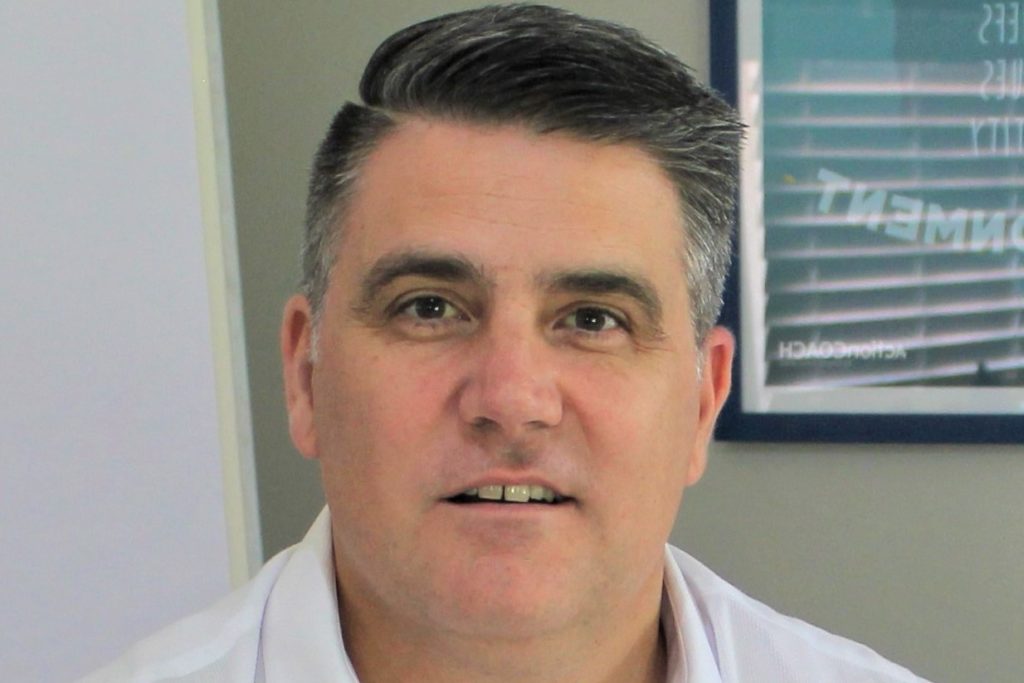 However, he returned to South Africa to study marketing and business management. After graduating, he moved into the banking industry and then into marketing construction equipment.

He admits that his dream had always been to own his own business and that he had initially set his sights on buying a food franchise as these had a far better survival rate than most other start-up businesses.

But the initial investment costs were, and remain, extremely high. Trevor did not have the funding and instead opted to work in the Middle East to save up sufficient money to follow his dream and buy a business.

He started out managing a trading firm in Saudi Arabia, and then joined a London-based design consultancy that wanted to grow their presence in the Middle East. He not only had to negotiate his release from his contract but recruit another South African to replace him.

That done, he set off to joined the Bahrain office of Origin Communications, a boutique agency consultancy specialising in branding, annual reports, corporate literature and stakeholder communications. In his own words, he says he had “an absolute blast” with clients spread as far afield as Kuwait, Dubai, Qatar and Saudi Arabia, and ultimately became a shareholder in the business.

But, after three years, Trevor admits to a dose of cabin fever in a very restricted environment and he recruited the company’s creative director to move with him to Dubai to open an office there.

But, within a year, the Dubai office had grown substantially and it was decided to move the Bahrain head office to the UAE and Trevor was asked to assume the role of managing director.

Despite his intention to spend only two to three years in the Middle East and come back to South Africa, he ultimately spent over nine years there.

Trevor returned to South Africa in late 2009, just before the 2010 Soccer World Cup. Again, he had been investigating the possibility of a food franchise. “But the money needed was bizarre and, deep down, I knew wasn’t cut out for the food business. I eat the food. I don’t cook it,” he smiles.

He then stumbled on an advert for an ActionCOACH franchise in Entrepreneur magazine. He still has the cutting from the magazine.

“My company is called Business Mastery. I registered it when I bought my franchise license. I decided to use this as the name of my business to remind people (and myself) of just how important the basics are.”

“It sounded quirky. I wanted to become a business coach because I had been coached. I liked the idea and decided to check it out. The company had just launched in South Africa and was looking for coaches to help grow the franchise. I did my due diligence and fell in love with this business,” he recalls.

After completing his training and certification at ActionCOACH’s global head office in the United States, Trevor returned to Durban expecting a queue of customers waiting outside his door.  But, as there was nothing like ActionCOACH in the country at the time and virtually no-one had even heard of business coaching, he had to start from scratch, raising awareness through the media and a concerted sales and marketing drive.

Over the years, Trevor has seen the ActionCOACH franchise grow to over 40 coaches across South Africa. His own business has also gained traction along the way.

WATCH OUT FOR PART 2 AS TREVOR DISCUSSES HOW BUSINESS OWNERS NEED TO RESPOND TO THE CHALLENGES POSED BY THE PANDEMIC ...