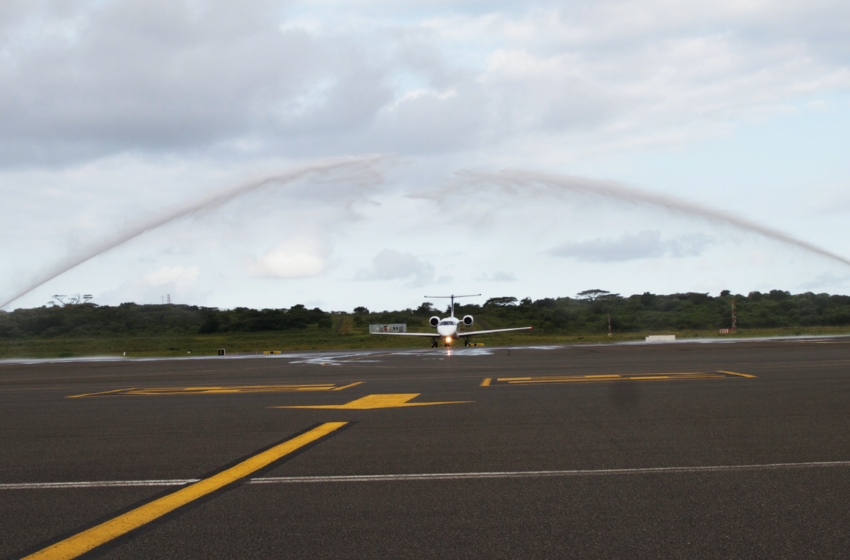 The touchdown and welcoming water salute that greeted Airlink’s Embraer ERJ135 Regional Jet at King Shaka International Airport this week (April 5) not only marked the introduction of a direct flight between Durban and the Zimbabwean capital but also highlighted opportunities for economic recovery.

That was according to government and business leaders who welcomed the first flight. This is Airlink’s third direct route from Harare, along with Johannesburg and Cape Town. It will operate flights on Tuesdays, Thursdays, and Sundays.

Zimbabwe is one of South Africa’s key trading partners and, according to the Organisation for Economic Co-operation and Development, South Africa’s exports, year-on-year to November 2021, increased by 10,6% from R3,5 billion to R3,87 billion, while imports increased by 85,8% from R156 million to R290 million.

All parties agreed that the introduction of a direct flight would optimise this whilst also boosting regional tourism and facilitating the realisation of the African Continental Free Trade agreement.

Locally, a resilient domestic market has been critical to the recovery of air travel in South Africa with King Shaka International Airport passenger numbers breaching the 60% mark. Overall, domestic travel now contributes in excess of 84% of Airport Company South Africa’s (ACSA) airport network traffic, compared with a 69% contribution in 2019.

He added that Airlink was becoming an extremely important partner to King Shaka International Airport with some of the most significant air routes on the continent.

ACSA’s Regional General Manager, Nkosinathi Myatasa, added: “To ensure our sustainability and agility in a constantly changing business environment, we embarked on a recover and sustain strategy, coupled with a revision of the company’s governance framework and operating model.”

This includes the promotion of regionalisation and clustering of the airport network providing pooled resources and air access to previously less serviced markets, building of provincial networks that feed into major South African airports, the SADC region, the African continent and the rest of the world and, at local level, enhancing the accessibility of airports and the airport economy for local communities.

“This new route will significantly improve both leisure and business travel, which – in turn – will greatly assist our tourism sector’s recovery from the devastation of the Covid-19 health emergency and the associated restrictions under which it has had to labour for so long. Importantly, too, the air route opens the door to the prospect of an altogether new era of air-based trade between Durban and its surrounds and Harare,” said KwaZulu-Natal’s MEC: Economic Development, Tourism and Environmental Affairs, Ravi Pillay.

He said the new route was a building block in the province’s road to economic recovery which hadn’t happened by accident, but took conscious hard work by many stakeholders.

Pillay observed that timing was perfect, coming just a day after President Cyril Ramaphosa’s announcement that the State of Disaster in response to the Covid-19 pandemic had been lifted.

He said that government, business across all sectors, labour and civil society all wanted the KZN economy to be firing on all cylinders.

“We won’t sweep things under the carpet. We are recovering from the triple whammy of recession, Covid-19 and the terrible week (of looting) in July last year. We will analyse it, ask ourselves tough questions and commit to making sure that it never happens again. That means we will call out things for what they are and hold people accountable …  But the vast majority of good people want us to rise as KZN…  Our people … all want to put their shoulders behind this wheel.”

Pillay pointed out that KZN’s recovery would not happen by accident. Provincial government had put in place a recovery plan that covered 14 different sectors, including pillars like tourism, agriculture, manufacturing, the oceans economy, the transport sector and the informal economy.

He noted that the rest of Africa was looking to South Africa for leadership when it came to the African Continental Free Trade Agreement and direct flights three times a week between Durban and Harare would open up a new chapter not only in tourism but also for the business sector. 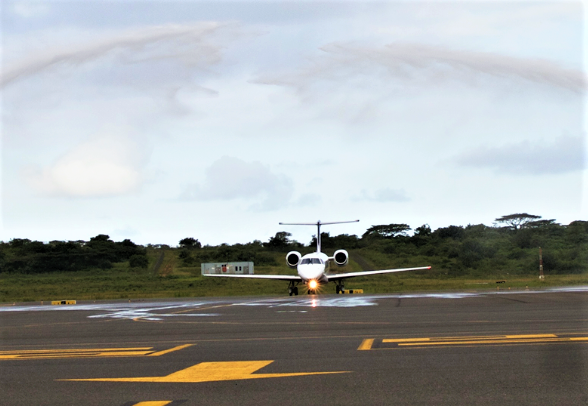 “We mustn’t become victims of negativity. The truth is that a lot of positive things are happening. Major investments are rolling out as we speak. They are not just in planning. That’s a positive vibe that we have to build on.”

The investments to which he was referring include the R2.6-billion Toyota Corolla Cross production line that will deliver the first generation of commercial-scale hybrid electric vehicles to come off a South African assembly line, multi-million rand investments by Sappi and Tetrapak and the R6.5-billion Zulti South expansion by Richards Bay Minerals as well as harbour upgrades proposed by Transnet and the establishment of the Automotive Supply Park on the old Durban Airport site which will fall under the banner of the Dube TradePort.

He concluded that these – as well as the new route launch by Airlink – were important for rebuilding confidence in the region and starting a whole new chapter.

AIRLINK’S JOURNEY BACK TO KZN

Airlink chief executive and managing director, Rodger Foster, underscored the commercial and tourism importance of the new route for both Durban and Harare, which are key Airlink markets.

However, he stressed, it was important to consider the context in which this had happened.

“Two years ago, the world as we knew it was turned upside down as governments around the globe moved swiftly to try and contain and stop the spread of Covid-19. As in most countries, we counted the toll in terms of lives lost, hospitalization, restrictions on social interaction and devastating economic and industrial disruptions. Accord to most recent unemployment figures, more than 2 million jobs were lost across South Africa’s economy as a direct result of these measures. During this time, Airlink, along with other airlines and partners in the transportation industry, saw their supply chain systems face an existential crisis.

“For Airlink, this crisis was compounded by the relaxing of our long standing partners SAA which just preceded the pandemic – a double whammy if you like. Others in our position may well have thrown in the towel, but we have never lost faith in South Africa, the SADC region or the resilience of everyone who lives here. Instead, we took full advantage of the lockdown hiatus to redefine, re-organise and rebrand Airlink.”

“Our shareholder reaffirmed our belief and confidence in Airlink and we remerged as totally independent, agile and financially robust company,” he said.

Today, Airlink’s fleet of more than 50 modern airliner serves over 45 destinations across southern and eastern Africa reaching as far afield as St Helena and the Ascension Island in the South Atlantic. The airline also competes on some of South Africa’s main domestic travel routes.

Foster said that renewed travel restrictions in response to the discovery of the Omicron variant along with the looting in July 2020 had been, by far, the biggest test of Airlink’s resolve and dedication to the Durban, Pietermaritzburg and broader KZN market.

Quoting figures supplied by the eThekwini municipality, he said that about 8 000 people had lost their jobs as a result with a further 80 000 jobs remaining at risk. More than R60 billion went up in smoke due to lost sales, lost stock, equipment and lost machinery.

“But our decision to expand our operations in KZN … speaks to our undiminished faith in the region. There is no denying its importance and position as South Africa’s second largest productive province,” he pointed out.

He also noted that Durban’s GDP had marginally out performed 2019 levels.

“Economists point to financial services, manufacturing and trade as major growth sectors. However, tourism is still recovering and it remains far short of 2019 visitor and occupancy levels… It is in this context that today’s launch of our new Durban Harare service takes on additional significance. It recognises the deep business, tourism and private sector connections that exist between KZN coastal centres on the one side with Harare and most of Zimbabwe’s economic and development nodes on the other. Although these have historical roots, they also reflect the dynamism and the entrepreneurship that charcterises the vibrant trade between the two markets.”

He said that Airlink had stepped in because this was an under serviced market.

Visitors arriving at King Shaka International had peaked at 37 000 in 2018 but began falling in 2019. Since then, they have halved. “We believe that convenience and the affordability and reliability of direct flights will stimulate travel between the two cities and promote additional add economic activity including, trade, tourism and investment,” he said.

According to Foster, the launch of other KZN routes, including a new double daily service between Durban and Gqeberha (Port Elizabeth) and a direct flight between Durban and Mbombela (Nelspruit) to transport tourists visiting the Kruger National Park and surrounds also reflected the importance that Airlink attached to the KZN and its confidence in its potential.