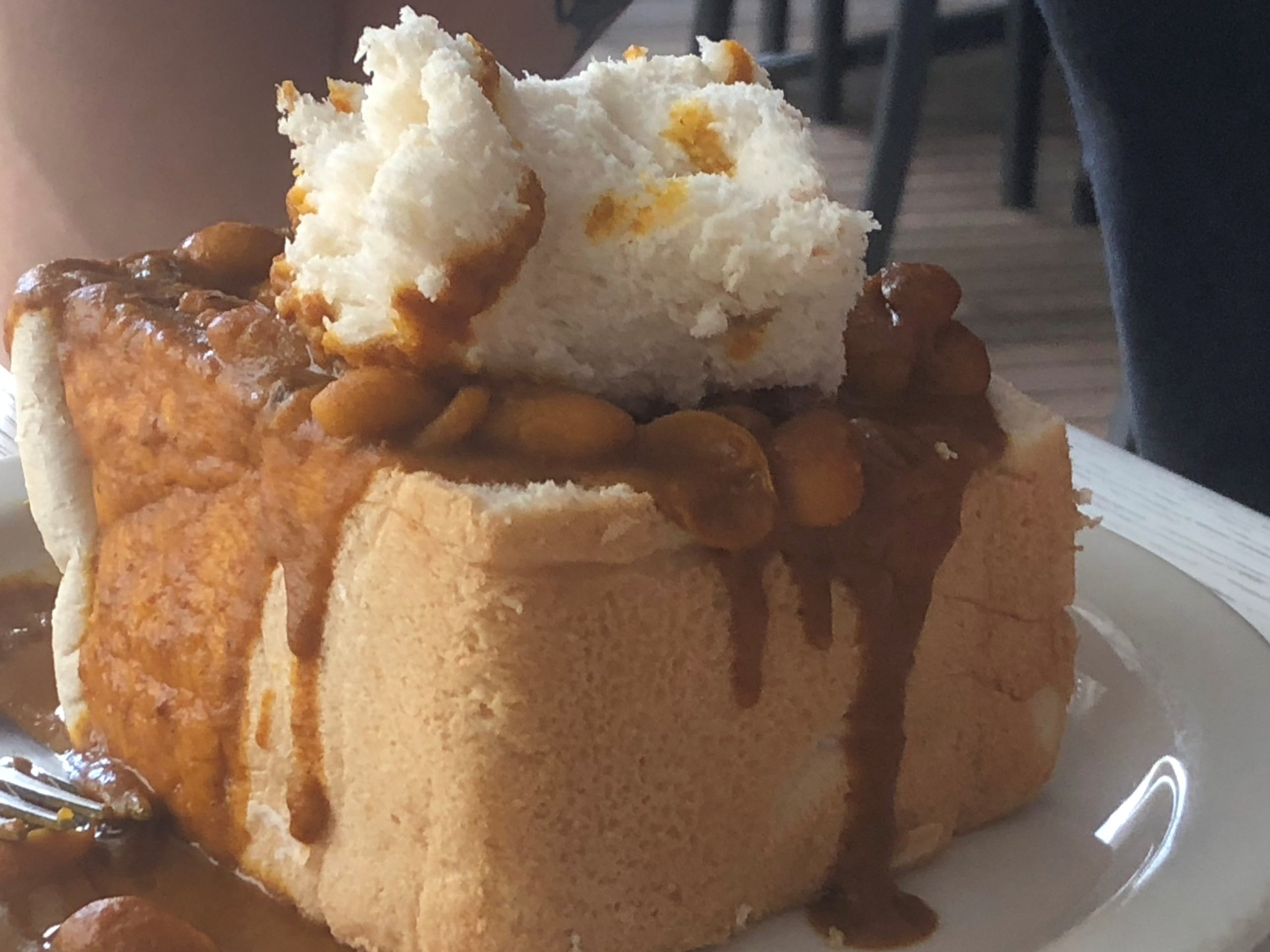 HOPPING ON TO THE BUNNY BANDWAGON

While no-one can say with absolute confidence just where it comes from – and there are plenty of theories – one thing is certain. It’s the sort of street food that no-one can really forget. In fact, the beautiful bunny is now so popular that it is enjoyed by all cultures and is even the subject of an actual pilgrimage by many an out of towner visiting the port city of Durban on Africa’s East Coast.

On the face of it, there should be no great rah-rah about a half or quarter loaf of white bread that has been hollowed out, filled with curry and then plugged with a sizeable chunk of the soft centre that was originally removed.

But this is where the mystical magical ingredients come in – until you’ve enjoyed one, you can’t quite understand what all the fuss is about. After you’ve sampled a genuine Durban curry (whether mutton, chicken, beef or anything more creative) that forms the heart of a bunny, you will probably never look at curry in quite the same way!

The humble bunny has now become so popular that some of the provinces’ top chefs – from boutique restaurants in Durban to self-declared culinary artistes in the Midlands – have even tried to make haute cuisine versions using miniature look alike loaves delicately arranged on fine china plates.

Sorry, guys, the bad news is that they just don’t taste the same. Bunnies need to stay true to their roots and be served in the rough. No perfect white table linen or knives and forks needed – although a few serviettes could come in handy.

That’s because bunnies need to be eaten with your fingers, according to Out&About’s doyenne of bunnies, Robz Millar.

So, move over Playboy mogul Hugh Hefner, and listen to what our bunny boffin has got to say about Durban’s hottest culinary offering.

THE ART OF CHOWING A BUNNY

Carefully. The trick is to start with the lump of bread at the top which you can dip in the gravy and then move downwards. Tear pieces off the side and then dip them in the gravy and add meat, taking care not to venture below the filling or you will have a hot runny mess on your hands!

According to Robz, a quarter bunny is usually perfect for a single meal, although some establishments sell half bunnies which are great to share.

The gravy is usually the hottest part of the bunny. If you find that you can’t take the heat, it is always good to have a soft drink or, better still, a beer handy. 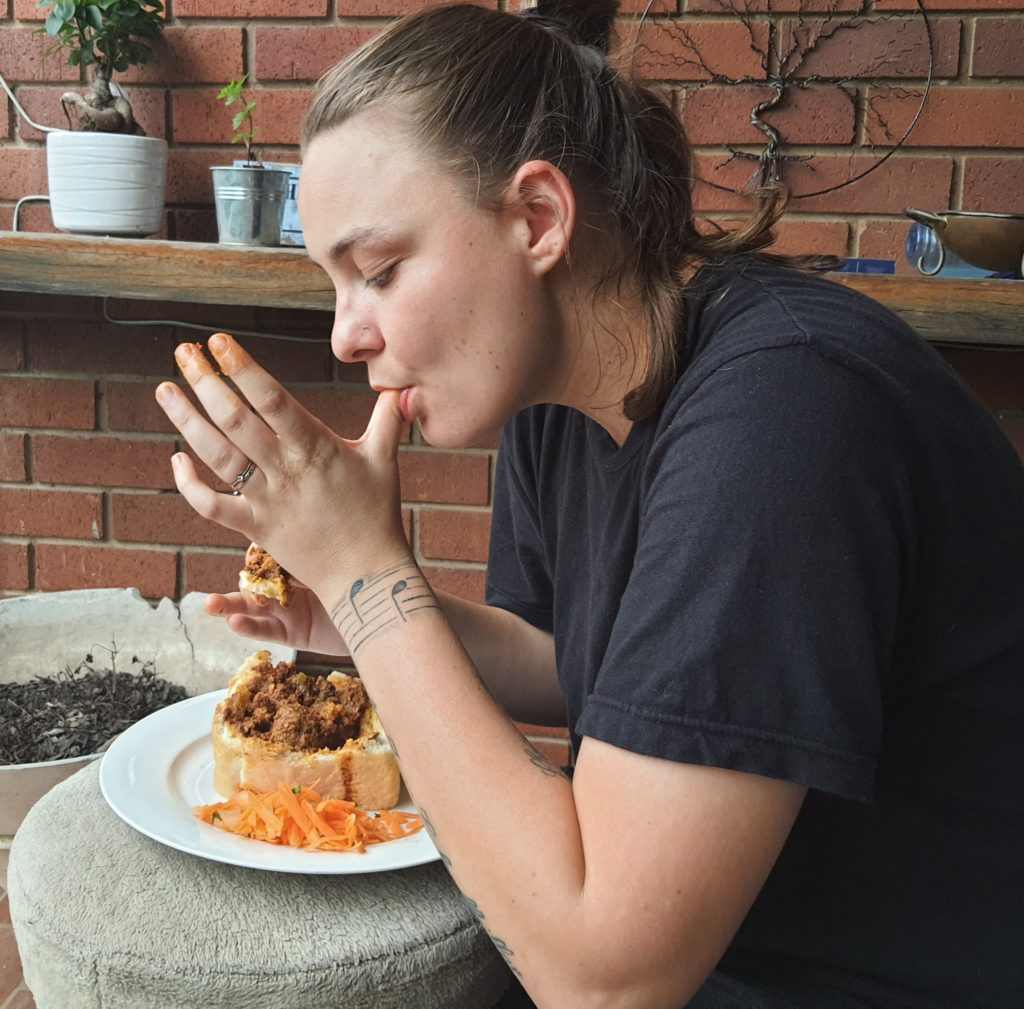 A Durban restaurant owner once said that milk (or even a cup of tea) was the best way to put out a bunny fire – but somehow that just didn’t sound right!

While you are taming the ire of the spices, raise a glass to the still uncertain history of the bunny.

It originates from the Indian immigrants who arrived in Durban as indentured labourers to work on the province’s sugar plantations. It was probably perfected and sold by those that followed to make a new life for themselves as merchants, otherwise known as banias in Sanskrit. Over the years the food (or chow) sold by the merchants (banias) morphed into the bunny chow.

On a purely practical level, the most popular take out dish in the so-called Indian areas during the early days of apartheid was a roti and curry. However, a roti disintegrates quickly if not eaten immediately. For workers in nearby factories and homes which had been relocated outside of the city as part of the reviled Group Areas Act, this was not always possible or practical. Enter conventional white bread which was not only more resilient but also affordable for the poor.

Over and above these beliefs, there are also a number of yarns that still circulate about the origins of the bunny. Some say that beggars would approach the banias for leftover food at the end of the day. Because they didn’t have enough time to make sandwiches, they quickly dug out the centre of a loaf and filled it with meat and gravy.

Alternatively, there is also the story of the Indian caddies at the Royal Durban Golf Course who were unable to get sufficient time off to slip away to the then bunny hub of the city in Grey Street for a curry at lunchtime. Instead, they got their friends to buy their curry and bring it to them at the golf course – in loaves as they were easy to carry in handy substitute lunchboxes made out of bread.

The moral of the story is that opportunity was the mother of the bunny invention. Whatever the truth, the most important thing is that this crazy combo has survived the test of time to actually be one of the dishes that actually defines the city of Durban and is pretty much universally enjoyed.

Robyn visited some of the best bunny joints in the city to test the fare and to tell you where to pick up the very best versions of this famous street food. Her observations are pitched at everyone from local residents to visitors and even tourists.

So, watch out for her review which will be live on our site tomorrow.