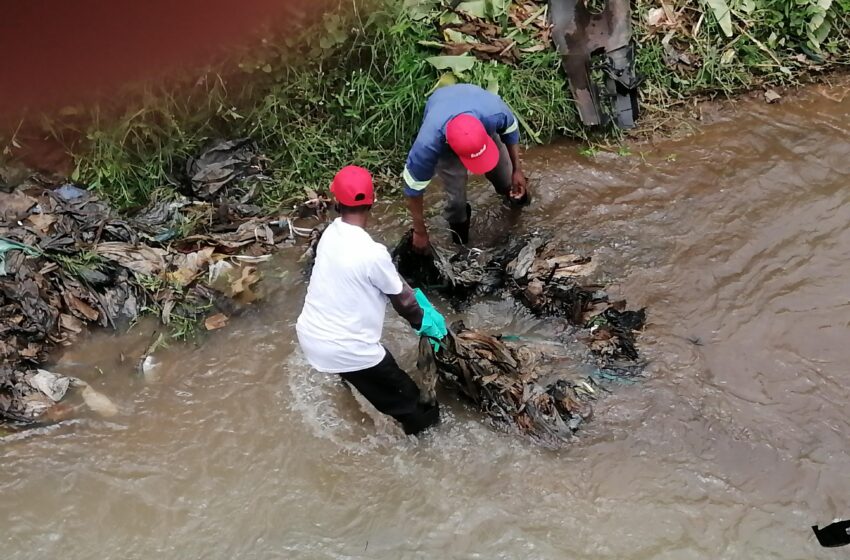 There is far more to cleaning a badly polluted river than meets the eye, according to Dr Abie Khan, Quality and Food Safety Manager for Willowton Group which has “adopted” a 1-kilometre-long stretch of one of South Africa’s most contaminated waterways.

Every month, starting from December 2021, the company has committed to cleaning a stretch of the river that runs from the bridge at New Greytown Road (Bambatha Road) to the Manning Avenue bridge. This is just beyond the Willowton manufacturing site in Pietermaritzburg.

It takes teams of Willowton employees five days to clear the area. This entails removing solid waste such as plastics or scrap metal from the water course as well as clearing alien vegetation from the surrounds.

In partnership with Talbot Laboratories, a SANAS accredited testing facility, Willowton is also keeping tabs on the quality of the water in the Baynespruit with special attention to E. coli which is a major health hazard.

Willowton’s January clean-up (on January 13, 2022) saw team members pull everything from vehicle parts (bumpers, bonnets etc.) to carpets, plastic waste (including plastic packets and bottles) to paper and cardboard from the waterway.

“The Baynespruit is classified as one of the most polluted rivers in the region and is associated with poor ecological health which has a significant impact on local communities and the environment. Due to the high pollutant loads introduced into the Umgeni system by the Baynespruit, interventions which would result in even low to moderate improvements in water quality of the Baynespruit are likely to contribute significantly to improvements in the overall water quality of the Umgeni catchment,” said Dr Khan.

He said that Willowton Group’s third river clean up on February 15, just ahead of the 2022 Dusi Canoe Marathon, revealed that reducing the rubbish in the river itself actually brought down levels of E. coli which are an ongoing health hazard.

“We have taken samples of the water before the clean-up and samples post the clean-up to see the difference we are making. We will use this to highlight the importance of getting the stakeholders and communities along the entire river involved this initiative,” said Dr Khan.

Samples taken before and after the clean-up revealed that the very high levels of E. coli prior to the removal of waste dropped significantly afterwards but then began to rise again.

Micole Martens, General Manager of Talbot Laboratories, said that samples taken prior to February 15 were high (648 800) but dropped to below 100 000 (98 040) six hours after clean-up. Unfortunately, they started increasing the next day.

This demonstrated that a physical clean up allowed for better flow and “cleaned” the river. The counts started increasing once more because the pollution from upstream continued.

She pointed out that things like crisp packets, plastic bottles and even trolleys often make their way into rivers. Unfortunately, these things are intentionally thrown into the river. Other times, litter blows rubbish out of bins or landfill. This makes its way into the watercourse. No matter how the litter gets there, it’s really important to remove it. Physical pollution can have a devastating impact on the ecosystem as can be seen by the high E. coli counts before clean-up.

“By carrying out regular litter picks, we can help alleviate the burden of physical pollution on our rivers and other habitats,” Dr Khan added.

He confirmed that this latest clean up by Willowton Group yielded over 2.217 tons of plastic, metals for recycling and vegetation.  Willowton Group is currently exploring the process of composting the vegetation removed from the Baynespruit for use in the Willowton garden.

Martens stressed that both physical pollutants and bacterial and chemical pollutants that were not visible needed to be removed from the Baynespruit to make it safe for use by local communities without access to clean water via the municipality.

“Rivers contain microbial life and pollutants from a range of natural sources. For example, livestock animals are kept in the vicinity of a river. They can defecate directly into the waterway. Even without direct access, rainwater can mix with manure and other animal waste before draining into the river as runoff.

Martens added that, during periods of heavy rain such as that experienced in the KZN Midlands, storm water from treatment works and storm drains from the sewer network resulted in rainwater mixed with raw sewage being discharged into rivers. “This means that the majority of what gets flushed down the toilet or poured down the sink – including non-biodegradable items like wet wipes – ends up polluting the river. In theory, the rainwater should dilute the raw sewage and screens should remove gross solids — however, the existing infrastructure can’t cope with our rapidly increasing population, leading to many discharging more often than they should,” she explained.

During the busy festive season holiday period, beach closures resulting from high levels of pollutants washed down from the Midlands rivers following flooding as well as the failure of sewage processing further up the coast highlighted the impact that poor water quality could have on the broader economy as well as people’s health.

However, as Dr Khan pointed out, cleaning up a single stretch of river is, quite literally, just a drop in an ocean of waterborne pollution in South Africa. Only if neighbours upstream, together with local authorities, NGO`s and communities, joined together to save this river would there be a meaningful solution.

“Unfortunately, the clean-up needs to be all-inclusive to be truly effective.  If waste is thrown into the river upstream of the adopted spot, it will contaminate the cleaned-up area.  Hence, we need to encourage other players to adopt and look after their areas to ensure that the full span of the river is taken care of,” he stressed.

As a result, the Willowton Group is challenging neighbouring industries along the Baynespruit to join the river clean-up.

He went on to explain that Willowton Group had been involved in clean-up initiatives for decades on an informal scale.  Recent incidents, which included an unfortunate spillage from its own plant which resulted in pollution of the Baynespruit and associated rivers, inspired the company to not only clean-up after this incident and put measures in place to prevent any repeat problems, but also to make a commitment to ongoing efforts to protect its immediate environment.

The Willowton Group and DUCT (Dusi Umgeni Conservation Trust) founded the Baynespruit Conservancy in 2020 and the clean-up is just one of the initiatives in which the company is involved.