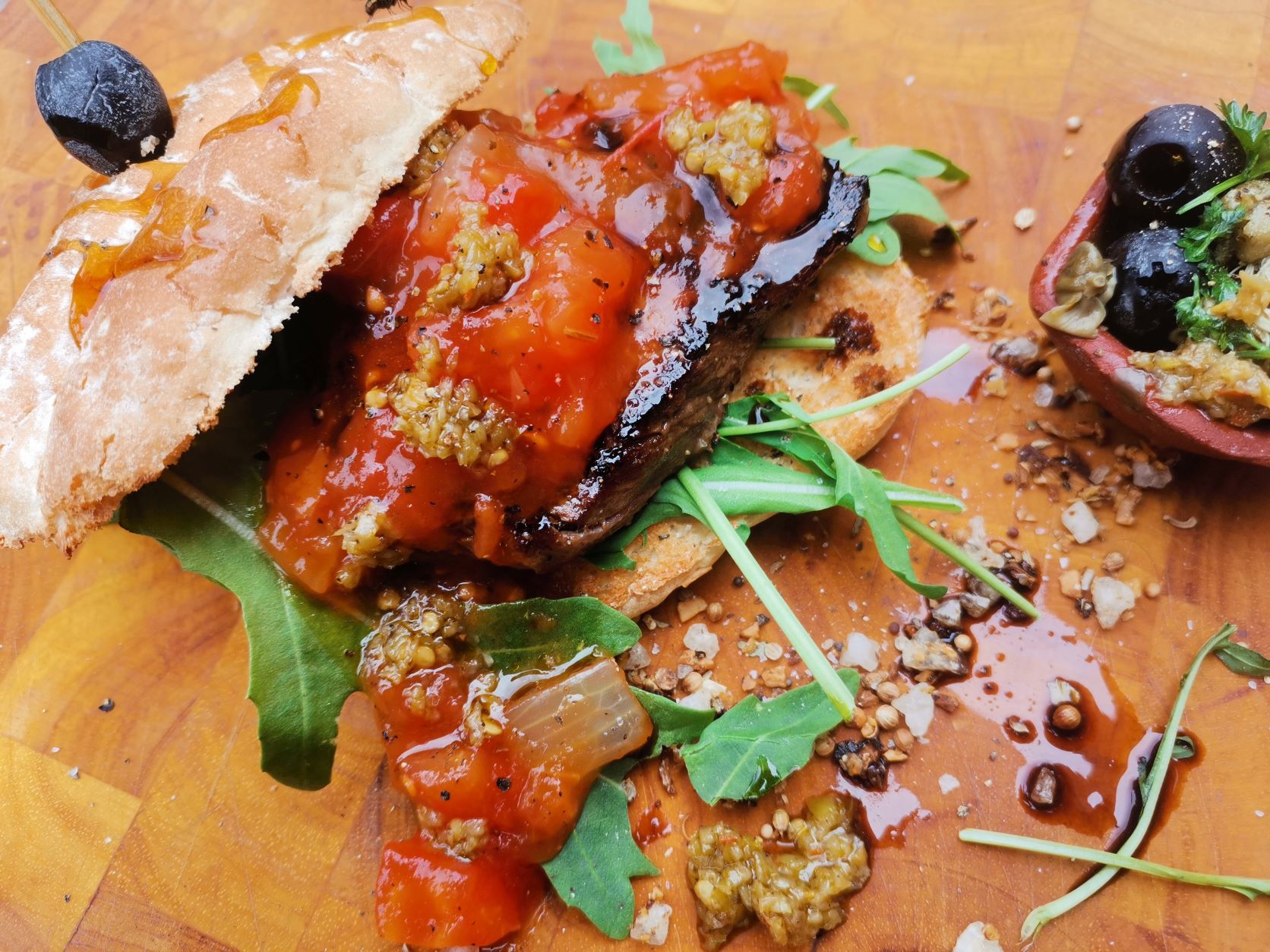 Chef JP has created a selection of 6, DIY burgers and baguettes that you can create in the comfort of your home to pay tribute to the most popular food of all times.

The actual origin of the hamburger is murky – was it invented in its namesake town of Hamburg, Germany, and sold to passing immigrants headed for America or did it emerge as a quick but flavourful and cheap eat in New York which is now recognised as the Hamburger capital of the world?

Whatever the real story, the truth is that the burgher that emerged just prior to the first World War has actually spawned a whole fast food industry and, en route, been totally denigrated! Some have continued to keep it true to its roots as a flavourful and even healthy option by creating gourmet burgers. Various different countries – think Turkey, Japan or Australia – have added their own touches and recolonised this favourite street grub.

What’s most important is that the standard hamburger hasn’t fared well during this worldwide journey and has even morphed into a rather greasy shadow of its former self. We’re all familiar with that quick, cholesterol filled meal prepared from pre- delivered frozen patties and seasoned with lashings of MSG – and accompanied by greasy chips, all in the name of the ‘coolest’ fast food franchise.

I confess that, even as a chef, I do have those week moments when that Big Mac or Steers burger just looks so good on that burger bling picture. But I’m quickly disillusioned and find myself longing to return to the classics.

This week, we’re moving beyond the standard commercialised c***p and bringing the good old burger home. Take it from me, all that indigestion and rapid eye movement, can be avoided by simply making your own healthy, creative burgers using fresh ingredients in your own kitchen.

I let my imagination run wild and here are six healthy and hearty burgers and baguettes that are both good for you and perhaps even a tad hedonistic!

Below you’ll also find my own beef patty recipe that speaks for itself! 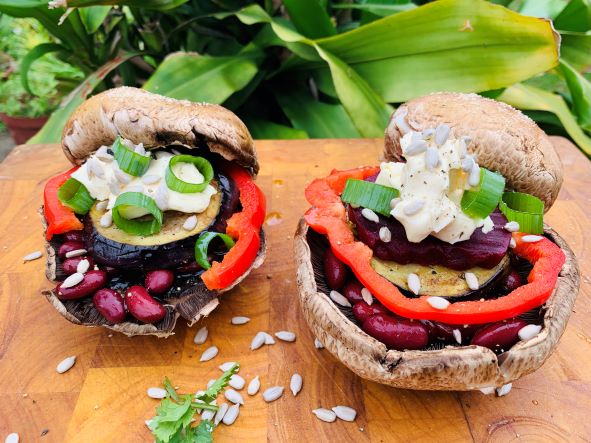 Okay, as a chef, I’ll admit that I have always believed that a vegetarian burger has always been a bit of a farce. Five years ago, it just did not fit and seemed much like the carnivores amongst us that had crept back into the closet were simply resisting those urges all in the name of a fashion or fad.

Today, I think new lifestyle trends – which include real issues with gluten and other ingredients – have made more than okay to take a chill pill and come up with alternative burger options.

It’s easy to design your own vegetarian snack.

I have restructured my mindful burger into something healthy and hearty using grilled mushrooms in the place of a roll or baguette. For my perfectly healthy treat, I’ve used grilled aubergine, grilled beetroot, red kidney beans, red pepper and garnished it with egg free canola mayo.

It is interesting to note that the portion of mushroom used in this meal has the same amount of plant based protein as the same grammage of lean beef mince used in the standard burger.

For those of us who can’t resist the standard burger, I’ve come up with a classic. 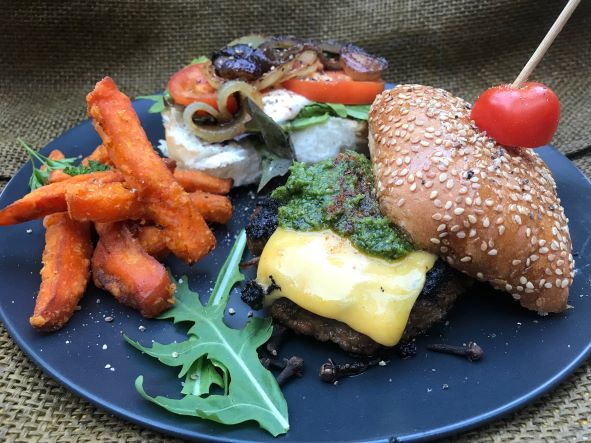 Roman by design, this classic lean mince burger comes with grilled cheese. You can do a three cheese mix. For this dish, I chose buffalo mozzarella classic pizza style, served with homemade basil pesto, a tomato and onion mix and served it up with hand cut sweet potato crisps. Just call it the mad Italian in New York.

It’s all about fresh, ingredients and a tad of love.

finely chopped onion to caramelise the pattie when frying

a cup of breadcrumbs

some herbs and salt and pepper

I also like to add some smoke paprika, ginger, garlic and some sweet basil

Massage the mix with your clean hands until it becomes thickened. Then divide and roll each pattie into your desired size before letting them rest in the fridge on some butcher paper and closed with cling wrap.

When you are ready to rock and roll, add a dash of olive oi and good butter (I recommend Kerry Gold, Irish unsalted butter). You can dust the patties with some more bread crumbs if you’d like. Then, turn up the heat and cook!

This puts us on the battlefield of the Burger King – and I’m taking the fifth amendment! But one thing’s for sure, this version of the burger is completely under rated! 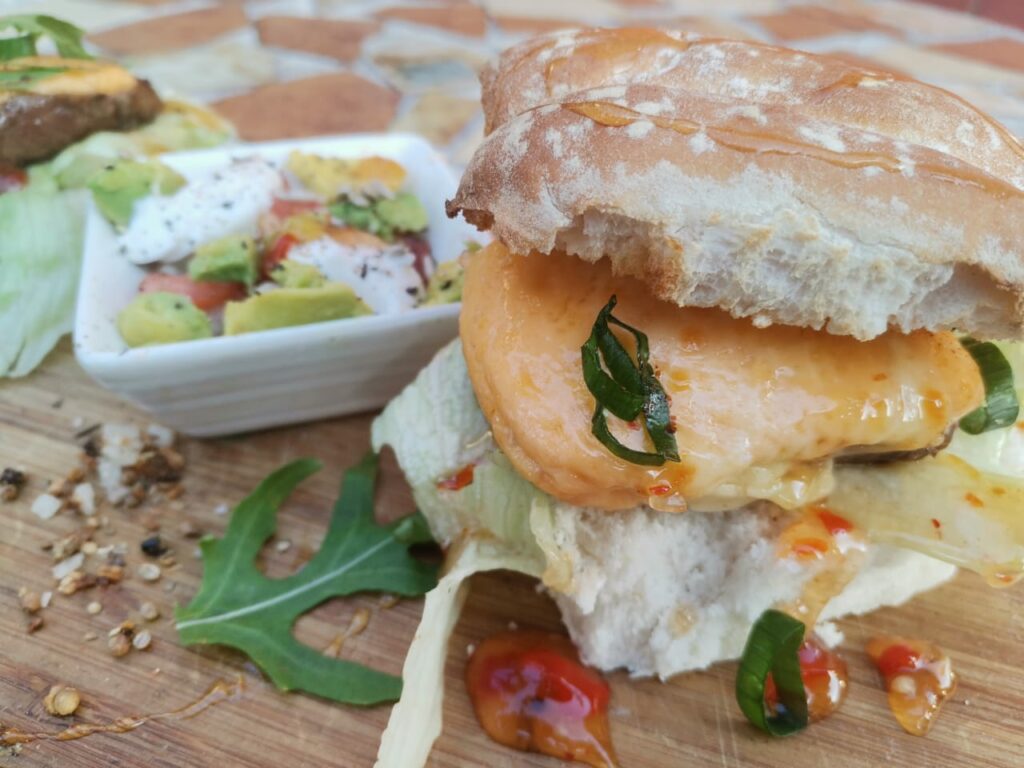 Traditionally they used minute steak because it was simply convenient and quick to grill. But in good ole SA, a tender fillet would do the same trick. Grill it medium and then slap on that cheese to make it sizzle. A variation of this real schmaltzy cheese affair has also been renamed the steak burger by the beer swilling Australians or become known as the cheddar melt in fast food circles.

Otherwise known as a fresh chicken and bacon burger … 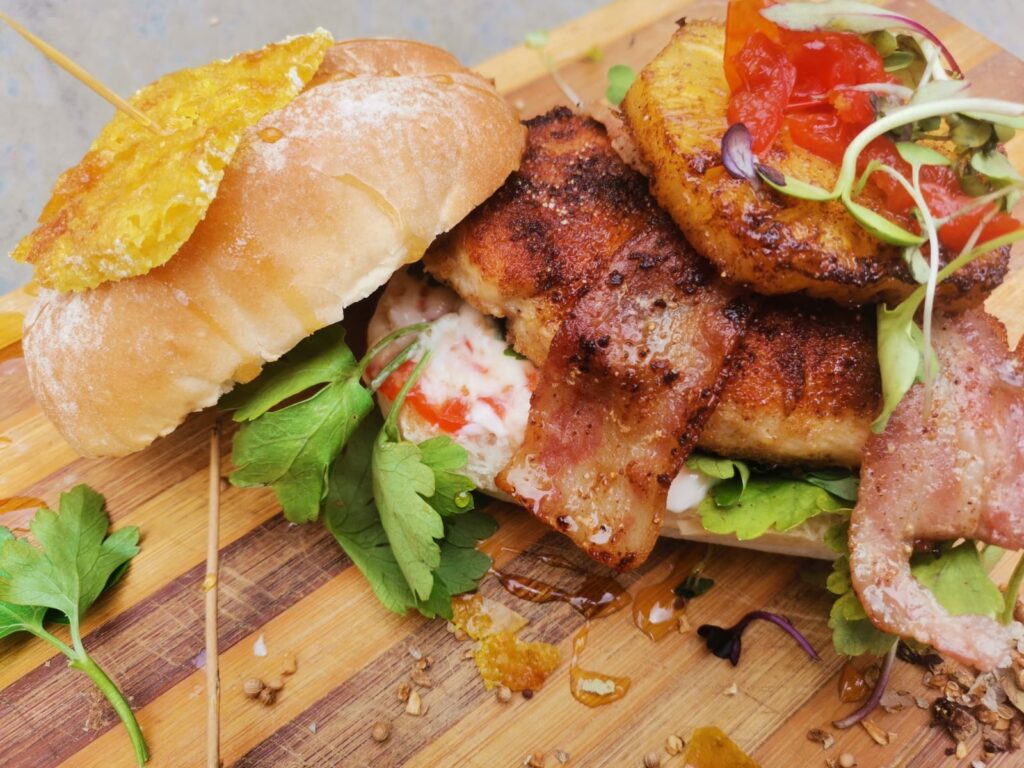 Globally, grilled chicken is the go to food group. Simple as it might be, it is healthy and can be up scaled into something deliciously old cool with a modern twist.

Apparently, no one likes pineapple on pizza or so the myth goes. But, damn, it is so good on a burger with a tender chicken breast and a dash of smoked paprika. I’ve served my chicken burger with caramelised fresh pineapple, crispy streaky bacon and fresh tomato and onion salsa verde.

Mix 1 cup of white sugar, 1/2 cup pineapple juice and 2 teaspoons of gelatin in a saucepan over medium heat. Stir vigorously until it forms a cloudy paste. Pour the mixture onto a wax paper lined baking sheet and spread evenly into a very thin layer with a spatula. Bake in your oven for 8 minutes at 180 degrees. Let 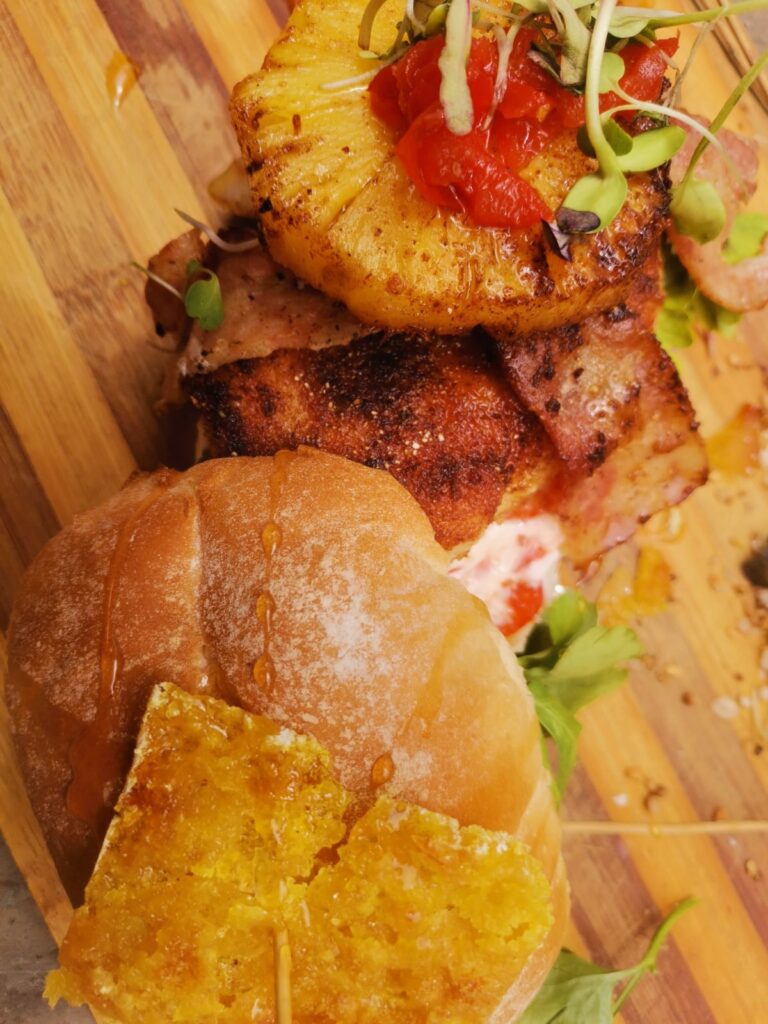 this cool down and gently remove from the wax paper. You’re then ready to place your pineapple sugar sheet on top of your razzmatazz burger, creating a sexy decoration fit for a (more discerning) burger king!

Although another example of the extent to which the humble burger has been colonised and translated, the glorious Prego Roll is something that none of us would be prepared to send to the bottom of the ocean.

My take on the Mediterranean always has to follow with Kalamata olives, olive oil, capers or even anchovies as a side. This way, you can explore the 16th century all over again. Take it from me, it will conquer your taste buds 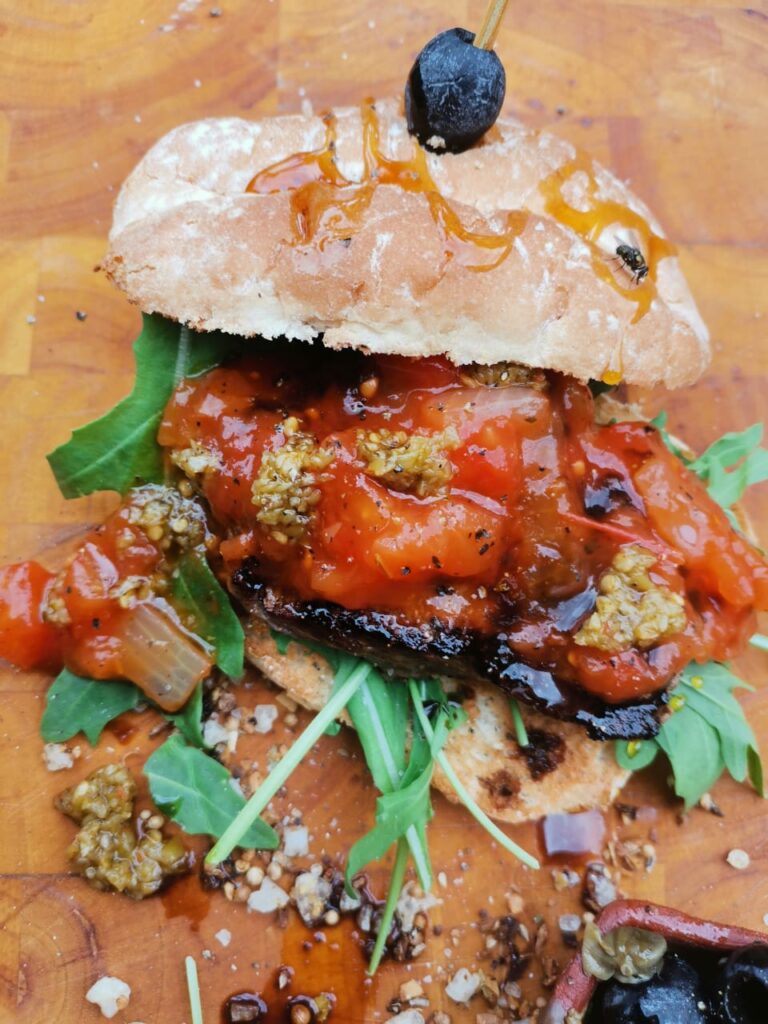 We’ve all heard about the current Netflix series Squid Game, crazy but intriguing. 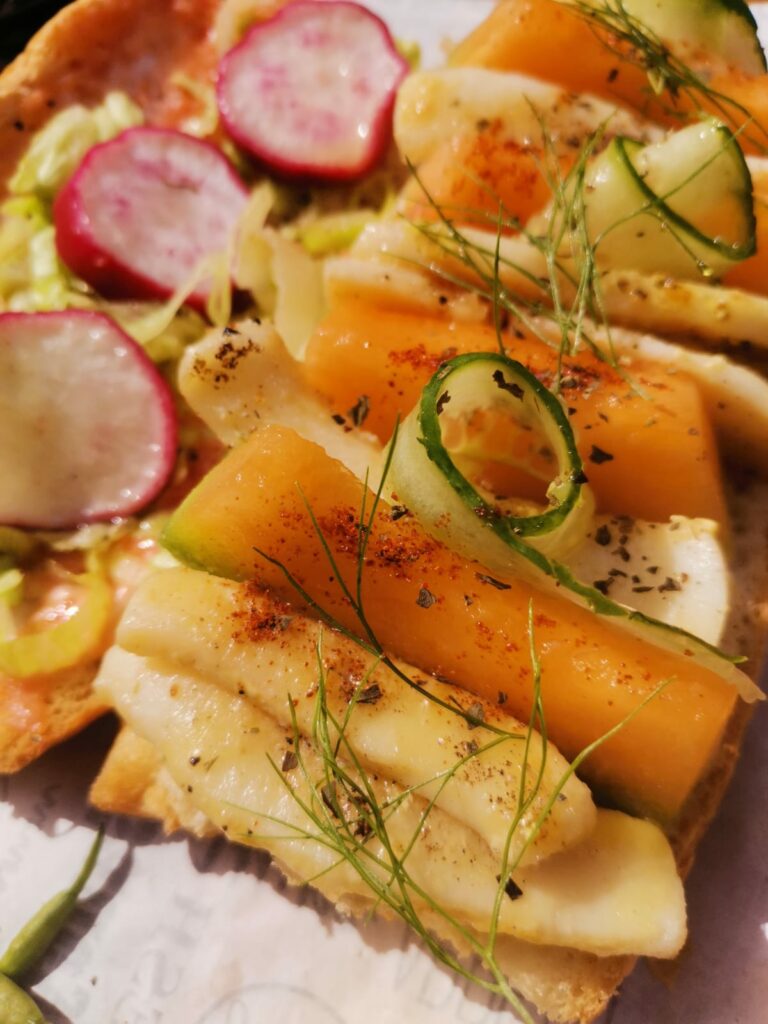 So, let’s splash out with my version of a squid baguette with thinly grilled garlic and lemon calamari strips served on a toasted baguette with spicy mayo – just a homemade sauce of half canola mayo, your favourite tomato sauce and a dash of fine chopped chilly or mustard (if you have some German roots).

Construct your baguette with sliced spanspeck or melon, cucumber twirls and garnish with fresh fennel, and radish. This is squid in the house…

I hardly think so… Take it from me, the stalwart burger will never die or even go out of fashion. I believe that the proliferation of cheap ingredients and fast food discounts has merely thrown our vision a little off balance. Join me as I bring out the buns, add more than a dash of creativity and enjoy a burger served in many different guises. In short, long live the beautiful burger! 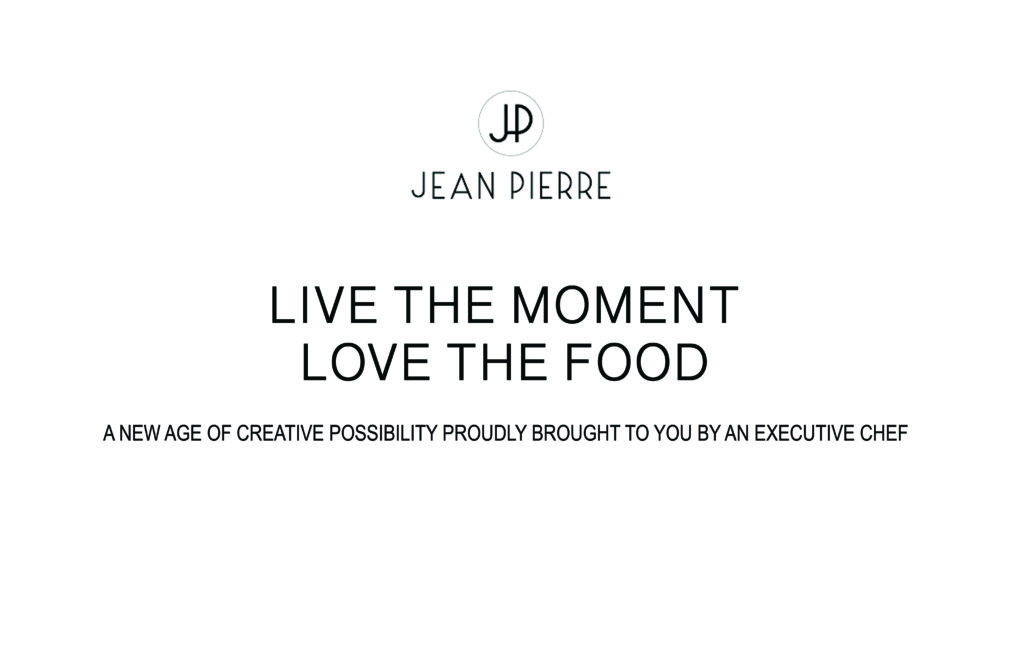